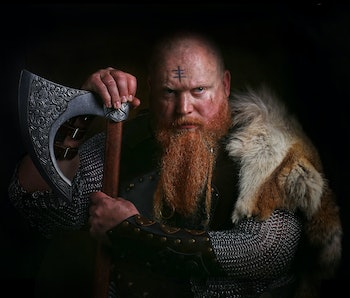 In the autumn of 2020, I was contacted by the field archaeology unit of the Swedish National Historical Museums, who are also known as the Archaeologists. They were excavating at a Viking-age settlement at Viggbyholm just north of Stockholm. During routine metal detecting of the site, they had located a very exciting find: eight silver necklaces and other silver jewelry along with 12 coins, everything delicately wrapped up in a cloth and deposited in a pot. In other words, a genuine Viking silver hoard.

As a professor in numismatics, the study of currency, I have spent my life becoming an expert in coins, so was called to help them learn more about this exciting discovery. It turned out to be a very interesting find. Most of the coins were the types that we usually see in Sweden: English, Bavarian, Bohemian (Czech), and Islamic coins as well as imitations of Islamic coins. But one of the coins was unusual.

A rare coin from Viking Normandy

Found within this hoard was a Norman coin from the late tenth century. It is only the second Norman coin found in Sweden, and they have rarely been found in the rest of Scandinavia. This is surprising because the duchy of Normandy was created when King Charles the Simple of West Francia (roughly modern-day France) gave a bit of land to the Viking chief Rolf (or Rollo) in 911.

You would have expected this affiliation to have led to an influx of Norman coins to Scandinavia, but this is clearly not the case. Maybe the reason is that the newly settled Vikings had learned from their Frankish neighbors to blend copper into the silver coins. And their Scandinavian cousins were only interested in high-quality silver coins, such as the English, German and Islamic ones.

But this is not the only interesting feature about the newly discovered Norman coin. It turned out to be of a type that had not been seen since the 18th century. Several scholars had doubted the very existence of this type of coin, arguing that the 18th-century record was a misreading. But the Viggbyholm find proved that they were wrong. The type did exist. So this Swedish find contributes to our knowledge of French history.

At the moment, I’m working in close collaboration with the Archaeologists to interpret the hoard. The coin shows that it should be dated to the last years of the tenth century. All the coins were turned into jewelry, mounted as pendants. The hoard was very carefully deposited within a house. This shows that the Viggbyholm hoard belongs to a category of hoards deposited for special reasons, maybe a ritual of a kind that we do not know the exact details of.

Indeed, the average Viking hoard in Sweden is quite different.

Like Viggbyholm, it consists of a mixture of coins and other silver artifacts, the coins being of various origins. But contrary to Viggbyholm, coins and artifacts are often present in hundreds or even thousands. What’s more, coins, jewelry, and silver ingots were often cut into pieces. They were bent and pecked with knives to check their consistency – good silver is soft. This is because the Vikings did not use coins as coins, they used them as silver bullion based on their weight.

Most of the coins were from abroad. When the coins left their homelands, whether, from England, Germany, the Middle East, or central Asia, their fixed value was effectively no longer guaranteed. In Sweden, they were merely bits of silver along with other silver artifacts. This is why the Vikings accepted all kinds of coins regardless of origin and age – provided that they were of good silver.

As a result, the obligatory tools of Viking tradesmen were foldable scales and weights that could be brought along on long journeys. These items are often found in archaeological excavations, witnessing the Viking trade habits. Contrary to popular belief, Vikings were not only bloodthirsty raiders.

These Swedish Viking-age silver finds are part of a series of discoveries that have helped create a broader picture of Viking Britain, Ireland, the North Atlantic, Scandinavia, the Baltic, Russia, Belarus, and Ukraine. Almost 900,000 silver coins are on record from these areas, besides other silver artifacts. Russia, Poland, and Sweden have the most finds, with about 250,000 coins each.

Two-thirds of the Swedish finds are from the Island of Gotland in the Baltic, making it the place with the highest find density of medieval silver discoveries in the world. Thanks to an antiquarian tradition going back to the 17th-century, the Swedish finds are exceptionally well documented.

Written sources from this period are rare, so silver finds are extremely important for our understanding of Viking history. And as the Viggbyholm find demonstrates, new finds turn up and add to our ever-changing understanding of past society. This is what makes archaeology so exciting to work with.

This article was originally published on The Conversation by Jens Christian Moesgaard at UCL. Read the original article here.

More like this
Science
Jan. 29, 2023
Studying ancient human DNA has unlocked our origins — but the ethics are hazy
By Emiliano Rodríguez Mega and Knowable Magazine
Science
Feb. 1, 2023
Study: Some Vikings Brought Horses and Dogs To Britain
By Kiona Smith
Science
Feb. 5, 2023
AI Is Smarter Than Ever – But Some Problems Still Stump Today’s Computers
By The Conversation and Jie Wang
LEARN SOMETHING NEW EVERY DAY.
Related Tags
Share: