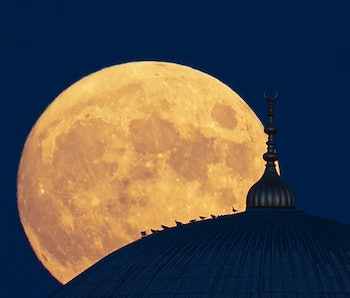 July’s Full Moon is the Buck Moon, providing a great reminder of the animal life that is around the United States and highly visible in the summer.

The Buck Moon will be at its brightest on July 13, dominating the night sky. Nights are still kind of short at this time of year, but you can still enjoy a great sight in the sky with the warm weather.

What is the Buck Moon?

To be honest, there are many Full Moon names that are associated with July: the Buck Moon, Thunder Moon, Hay Moon, Mead Moon and the Rose Moon are all common names for this month’s Moon in the United States. Your own culture or region may have different monikers.

The Buck Moon is meant to reflect the traditional name associated with the Algonquin peoples, according to NASA. The traditional Native American name came into wider use almost a century ago when the Old Farmer’s Almanac began publishing editions for newer American settlers, talking about astronomical sights along with planting tips.

The Full Moon will be at its brightest at 2:37 p.m. Eastern on July 13, but will still be nearly as full by local nightfall. The Moon will also appear nearly full on July 12, so don’t hesitate to take a look if you happen to be more available the night before.

While July has a short night to see the Full Moon, the advantage in more northern parts of the United States is the weather. You should have shirtsleeve weather and (we hope!) fewer bugs to contend with, compared with the spring, so be sure to enjoy the break from the elements while looking at the Moon.

The July Full Moon will be close to its perigee or closest approach to Earth, which some outlets term a “supermoon.” In reality, you won’t see very much difference in the Moon’s size, but it’s still a fun fact to share with friends.

How much brighter is the Moon during a Full Moon?

The Full Moon happens when the Sun, Earth, and Moon align in a particular way. When the Sun’s light can fully fall upon the side of the Moon closest to us, the Moon appears full. This alignment happens every 27 days when the Sun and Moon are on opposite sides of the Earth. (This alignment may occasionally cause lunar eclipses, but not this month.)

Shining at magnitude -12.92, the Full Moon is the brightest object in our night sky. It’s about six times as bright as the Half Moon and will wash out any fainter objects aside from bright stars or any planets that happen to be nearby. An exception will be the International Space Station, which holds its own at a maximum of -6 magnitude as it sweeps across the sky. (Most people can see stars as dim as magnitude 6 in dark-sky conditions, for comparison.)

When is the next Full Moon?

A typical Gregorian Calendar year — meaning, the calendar that most of the world follows — is 365 days. Since 12 Full Moons happen in 354 days, sometimes we may get a 13th moon in a calendar year. That won’t happen in 2022, however.

The next Full Moon will peak at 9:36 p.m. Eastern on Thursday, August 11. August’s Full Moon is called the Sturgeon Moon in many United States regions.

More like this
Science
8.1.2022 6:15 PM
Sturgeon Moon 2022: Why this month's Full Moon may be one of the best to see
By Elizabeth Howell
Science
7.25.2022 1:30 PM
The Webb Telescope will drop everything to observe the next interstellar object
By Darren Orf
Science
8.5.2022 12:15 PM
10 years ago, the Curiosity rover arrived on Mars — and revolutionized the hunt for alien life
By Allie Hutchison
Related Tags
Share: