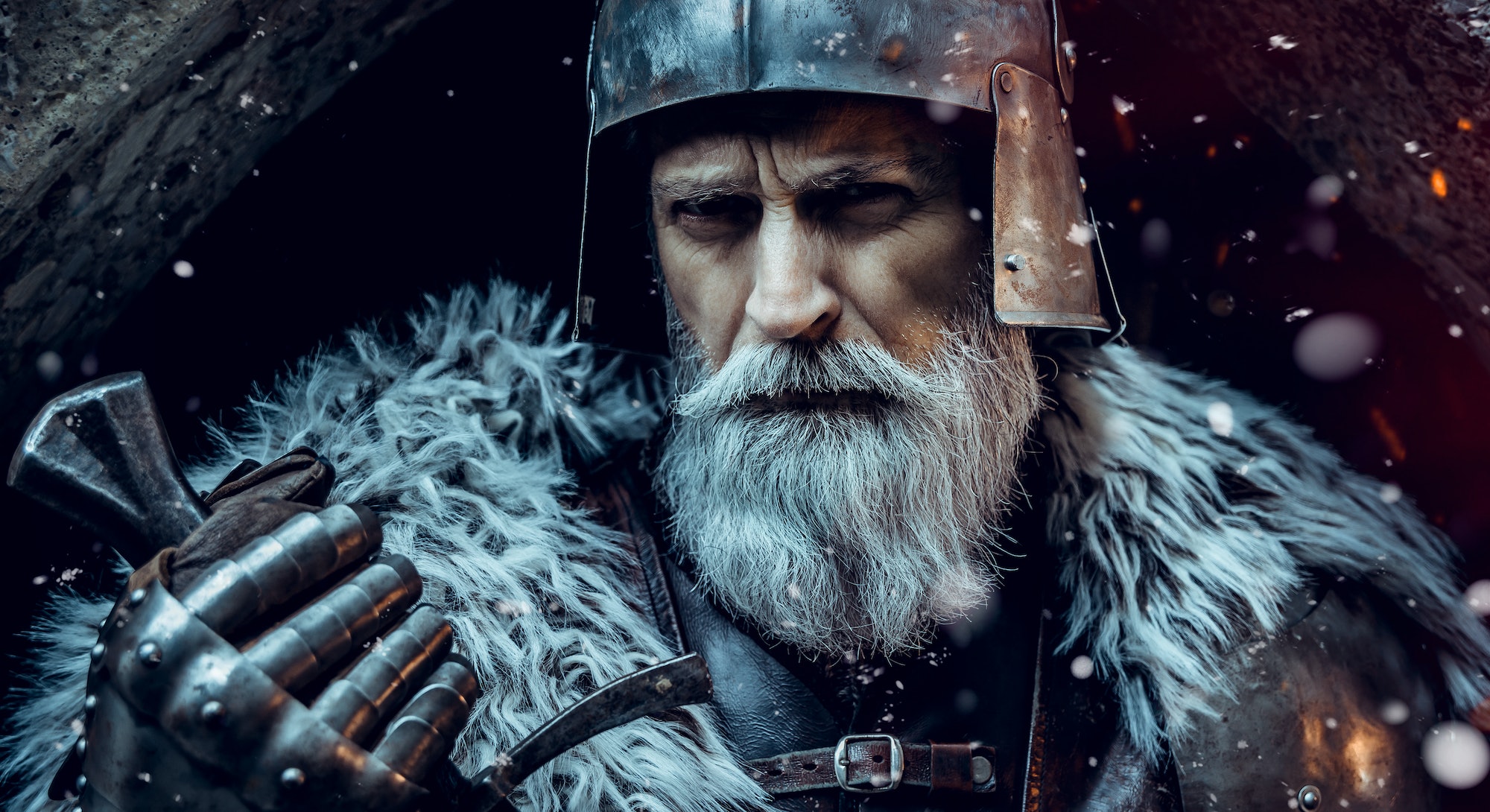 The Rök stone, an ancient, five-ton granite slab erected by Vikings in southern Sweden in the 9th century AD, has baffled scientists for more than 100 years. Its inscriptions are the earliest known example of written literature in Sweden, but unfortunately they are extremely well encrypted. But this week, codebreakers announced that they may finally have cracked open the mystery.

In a paper published in the journal Futhark: International Journal of Runic Studies, Swedish researchers lay out a new interpretation of the Rök stone, one that reveals an unexpected preoccupation for the Vikings who erected it: Climate change.

It was a tough code to crack: Not only do the inscriptions appear to be a series of riddles, the text is also composed in a form of Old Norse poetry known as skaldic poetry, which uses artful descriptions and circumlocutions to describe scenes (think if Yoda was a poet). To make matters even more confusing — and intriguing — the inscriptions are also written partially in ciphers, runes that stand for several letters of the alphabet. It seems that whomever carved this runestone did not want just anyone reading it.

For years, rune researchers had thought the text referred to ancient battles and Viking kings — a fitting interpretation for a people infamous for their warrior culture. But the “battle” the runes refer to may have nothing to do with swords, blood, and gore.

Instead, the researchers argue that the stone’s text details anxiety over the coming “battle” humans will have to face as they confront a future climate catastrophe. These fears appear to have been triggered by a spate of climate disasters that occurred in the mid-6th century AD — when there was a sudden decline in local agriculture.

The two and a half-meter high Rok stone (fittingly, “Rok” means “stacked stone” in Old Norse) is covered in more than 700 runes, which criss-cross over each of its five sides. The researchers argue it was erected in memory — and in warning — after the local area suffered a kind of rewilding as the result of volcanic eruptions that took place in the years 536-47 AD on the other side of the world, in the Americas. These terrible eruptions blanketed the skies of the Northern Hemisphere in dust — blocking out the Sun. This triggered an abrupt climate-cooling across the entire Northern hemisphere, disturbing entire ecosystems, including the area around the Rok stone. The effects were so catastrophic that the population of Scandinavia declined by half, according to researchers.

“Before the Rök runestone was erected, a number of events occurred which must have seemed extremely ominous: a powerful solar storm coloured the sky in dramatic shades of red, crop yields suffered from an extremely cold summer, and later a solar eclipse occurred just after sunrise.

Even one of these events would have been enough to raise fears of another Fimbulwinter,” Bo Gräslund, professor at Uppsala University, said in a statement.

The stone was carved hundreds of years later — but the effects of the crisis still lingered in local beliefs and ritual, the researchers argue. In fact, the stone may offer a radical retelling of Ragnarok, the tale of the Viking apocalypse: In Ragnarok, the giant wolf Fenrir swallows the Sun, turning the sky red, while the sunlight becomes “black,” — a possible reference to the colors of the sky following a volcanic eruption on the same scale as those that had scarred the land just a couple of centuries before. Along with other archaeological data, the evidence of climate catastrophes, and contemporary Viking social customs and hierarchies, the researchers say their new interpretation holds sway.

“The key to unlocking the inscription was the interdisciplinary approach. Without these collaborations between textual analysis, archaeology, history of religions and runology, it would have been impossible to solve the riddles of the Rök runestone,” Per Holmberg, professor at the University of Gothenburg, said in a statement.

The actual enigmas and their answers read like the script of a cerebral Game of Thrones episode. Here are the riddles in English, with their answers and interpretation, according to the paper:

After Vamoth stand these runes. And Varin,

the father, made them after the death-doomed son.

let us say this is a memory of Odin, which

spoils of war there were two, which twelve

times were taken as spoils of war, both from

Answer: The Sun and the Moon

Let us say this as a memory for Odin, who

because of a wolf has suffered through a

Interpretation: This is a reference to Fenrir, the wolf that swallows the Sun in Ragnarok, the researchers say.

This let us say as twelfth, where the wolf sees

food on the battlefield, where twenty kings lie?

Answer: The battlefield of Ragnarok

Interpretation: Based on an ancient Norse account of a last-stand at Ragnarok.

This let us say as thirteenth, which twenty kinds

were on the vast battlefield, of four names, born

And for Odin a memory…

Interpretation: Based on the encounters between Odin’s warriors and the Sun-swallowing wolf, taken from various ancient Norse accounts of Ragnarok.

Let us say a memory for Odin, dare!

[Who is] a protector of sanctuaries for a

Interpretation: When the Sun sets, it is thought to retire to a “sanctuary,” the researchers argue. The “brother” refers to the Sun’s brother, the Moon.

[Whom] does the wolf redden with blood?

Interpretation: In the accounts of Ragnarok cited above, the wolf Fenrir kills the Sun by swallowing it, and turns the sky red, the researchers say.

Let us say a memory for Odin to the young man,

to whom is born an offspring? It is not a lie.

Interpretation: This riddle refers to the coming of Odin’s son Vithar, the researchers say, which is important, because…

Interpretation: In the same texts cited above, Vithar kills the wolf — restoring the world to balance.

The connection between Odin and the Sun rests on how the local Viking establishment saw themselves, the researchers say. Part of why they maintained control of the region was by appealing to people’s fears of another climate crisis, convincing them that to guarantee a good harvest (i.e. no climate crisis), they had to follow them.

“The powerful elite of the Viking Age saw themselves as guarantors for good harvests. They were the leaders of the cult that held together the fragile balance between light and darkness. And finally at Ragnarök, they would fight alongside Odin in the final battle for the light,” Olof Sundqvist, professor at Stockholm University, said in a statement.

This also comes back to who the Rok stone was actually for. The researchers speculate that it was likely used in funerary or other religious rites.

“The enigmatic questions, the intricate cryptograms, and the labyrinth reading order made the monument a challenge for a select few, and a potential place for their enlightenment.”

This is unlikely the last interpretation of the stone’s inscriptions, they say. But it is one of the most comprehensive, and, now, after centuries of intrigue and mystery, the text is available for all us non-Old Norse readers to try and wrap our heads around. What’s your read?

The Rök runestone from central middle Sweden, dated to around 800 CE, is famous, among other things, for a supposed reference to the emperor Theodo­ric the Great. This study proposes instead that the inscription deals with an anxiety triggered by a son’s death and the fear of a new climate crisis similar to the catastrophic one after 536 CE. Combining perspectives and findings from semiotics, philology, archaeology, and history of religion, the study presents a completely new interpretation which follows a unified theme, showing how the monument can be understood in the socio-cultural and religious context of early Viking Age Scandinavia. The inscription consists, according to the pro­posed interpretation, of nine enigmatic questions. Five of the questions con­cern the sun, and four of them, it is argued, ask about issues related to the god Odin. A central finding is that there are relevant parallels to the inscription in early Scandinavian poetry, especially in the Eddic poem Vafþrúðnismál.