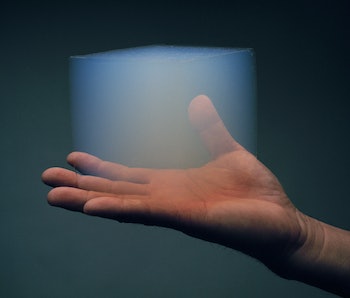 Regrowing bones is no easy task, but the world’s lightest solid might make it easier to achieve. Researchers have figured out a way to use hybrid aerogels, strong but ultralight materials, to prompt new bone tissue to grow and replace lost or damaged tissue.

Although bone cancer is a relatively rare disease (it accounts for less than 1% of all cancers), people who suffer from it often end up losing a lot of bone tissue and, in extreme cases, undergo amputation. The cancerous tissue has to be cut out, taking with it a large chunk of nearby healthy tissue to make sure that the cancer does not spread. This effectively removes the cancer, but also leaves the patient with a lot less bone than they started out with.

A recent study has used hybrid aerogels to restore the lost tissue by prompting bone regeneration. Aerogels are basically a combination of solid and gas. Think Jell-O, but one where the water has been slowly dried out and replaced completely by air. This slow and careful removing of liquid is what allows the gel to retain its shape instead of shriveling into a hard lump. The pairing of solid and gas makes aerogels extremely light and very porous. These two qualities make them exceptionally suitable to use as scaffolds, which can be used as physical roadmaps for the developing bone to follow as it grows.

"It turns out that bone tissue just needs a little bit of encouragement to regenerate."

Currently, the most common methods of bone regeneration either graft new bone on to the repair site or slowly pull two bits of bone further and further apart to allow new bone to grow in the gap. If you think that these methods sound painful, complicated, and expensive, you are right.

It turns out that bone tissue just needs a little bit of encouragement to regenerate. Most of the time, simple mechanical pressure will do the trick. The fiddly bit is getting the new bone tissue to grow in the right direction and for the right amount of time. Stop it too early and the bone will be too weak to actually serve a purpose. Let it grow too much and it will end up as painful projections.

This balanced growth can be achieved by using a scaffold, which is where hybrid aerogels come in. A scaffold is a structure that is placed at the site of bone repair, where it guides the growing tissue along its destined path. A good scaffold is strong but not too stiff, lasts just long enough for fresh tissue to develop, and has a lot of pores for the growing bone to snake through. This last bit is what makes a scaffold very similar to real bone. Hybrid aerogels happen to be a magic material that hits all these notes.

There are a lot of different kinds of scaffolds to choose from, ranging from ceramic and metals to cellulose hydrogels. So what makes hybrid aerogels any better than other scaffolds? For one, they are half made of proteins (that’s the “hybrid” bit), which are eventually broken down by the body. The other half, silica, slowly melts away as orthosilicic acid, which is known to hasten wound healing. Their pore size can be controlled during the manufacturing process, making it easy to adapt them to different uses. They are also being tested as drug delivery systems, meaning that the material could be spiked with medicines or growth factors before using it as a scaffold.

Earlier this year, three research labs based out of Iran, Germany, and Austria got together and decided to fuse a very strong protein with a very light and porous aerogel. The very strong protein is silk fibroin, the stuff found in silkworm cocoons and used to make fancy fabrics. It makes the aerogel strong and just stiff enough to use for bone growth. With the raw materials ready, the scientists started with Phase I: make the hybrid aerogel. Throw a source of silica, silk fibroin, some acid, and a touch of detergent into a pot. Bake for an hour and voilà! You have yourself a silica-silk fibroin hybrid aerogel.

Of course, the researchers faced their fair share of hurdles along the way. The first material they made was too hydrophobic (it repelled water, not good for a body that is 70% water), the second one was too stiff and dry, and the third one would have just sat around in the body forever without degrading. Finally, the fourth one hit the mark, and they made the perfect hybrid aerogel — hydrophilic (water-loving), not too stiff, and adequately biodegradable.

Having made the material, they now moved to Phase II: check if the hybrid aerogels are in any way harmful to human cells. The scaffold was put through a series of tests and deemed to be perfectly safe to use with human cells. In fact, the cells seemed to really like the material. When the hybrid aerogel was placed in a dish containing bone cells, they readily grew on its surface, depositing the proteins and minerals required for bone growth along the way.

"The aerogel was not just allowing new bone to grow, but also making it grow faster than normal."

On to Phase III: implant the hybrid aerogel in mice and check if it stimulates bone regeneration. The researchers made small bone injuries in two groups of mice and implanted the hybrid aerogel in one of them. After 25 days, they saw that the mice with the implants showed faster and better healing than the mice without implants. The aerogel was not just allowing new bone to grow, but also making it grow faster than normal.

This ability of the hybrid aerogel to speed up bone regeneration places it on the forefront of new therapeutic technologies. Imagine having bone fractures healing in a span of days, as opposed to weeks. Or being able to tell a bone cancer patient that, “Yes, you have to cut out a section of their leg but it can be easily grown back, no worries.” Hybrid aerogels are possibly the biomaterial that could make such conversations a reality.