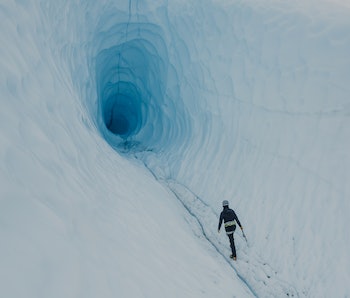 Billions of people around the world depend on glaciers and mountain snow for their water. As the planet warms and ice all over the world melts and retreats, those lives are at risk. Climate change is destroying the cryosphere at a breakneck pace, according to yet another damning report.

The Intergovernmental Panel on Climate Change (IPCC) released a new summary on the state of the ocean and cryosphere (frozen water, including ice, snow, and permafrost). The cryosphere represents about 70% of all fresh water on Earth, where the oceans represent 96.5% of all water everywhere. Overlapping with the UN Climate Change Summit in New York on September 23, it reports profound and devastating change to essentially all water on Earth, in one way or another. Anyone who lives on a coast, near a mountain, or in a place where winters drop below freezing, have already seen the effects of climate change and will continue to do so.

The Ocean and Cryosphere in a Changing Climate is the third report from the IPCC released this year. Since the cryosphere and ocean represent the majority of all potable water and all water on Earth, respectively, the damage is immense. No human on Earth is unaffected. The report is divided into multiple sections. It discusses risks to high mountain areas, polar regions, the effects of sea level rise, threats to coastal communities, and suggestions for risk management.

There’s a reason for the particular emphasis on mountains. Mountains are warming faster than any other place on Earth. The goal of the Paris Accords was to hold warming around the globe to 2 degrees Celsius, but many mountain regions have already blown past that number. This is changing the pace of seasons, the ways of life of mountain communities, and, of course, melting frozen water, leaving those communities without their relied-upon source. The causes of mountain warming are numerous, including methane emissions, as well as loss of albedo — the ability to reflect light. As temperatures rise, white mountain snow melts, and light that would’ve bounced off its reflective surface back out to space instead lands and warms the mountain. Ice reflects more than liquid water does, so if it melts and isn’t replaced, more sunlight lands, creating a warming cycle.

Other sections of the report will discuss the effects on drinking water, mountain runoff, and mountain habitability. Joanna Young, Ph.D. candidate in glaciology at the University of Alaska, Fairbanks, when reached for comment said, “ALL of the aspects of the cryosphere are showing signs of change in our changing climate. Everywhere in North America, records show that snow seasons are shortening, the amount of area covered by snow in winter is shrinking, and rivers and lakes are freezing later and melting earlier. Here in Fairbanks, we see a lot of evidence of permafrost thawing — fields that used to be flat are full of holes where giant subterranean ice wedges have turned to liquid, and homes that used to be built on solid ground are tilting and leaning as a result of thawing permafrost beneath them. It can be quite a costly problem. The glaciers in Alaska (more than 26,000 of them) are shrinking and retreating dramatically, with rates of loss that are among the highest of any mountain glaciers on the planet. These changes are visible to the naked eye, as in, if you visit a glacier here you can see on the mountainside the markings of how big the glacier was 150-200 years ago.”

The rest of the report covers polar regions and sea level rise, with particular focus on coastal and low-lying areas. The list of problems is too many to summarize. Some towns are experiencing droughts from lack of rain and low snowpack. Warming rivers are killing salmon and preventing spawning. Ocean acidification, driven by human-produced CO2, is killing off coral reefs and causing algae blooms. The ice in Greenland and Antarctica is melting, and if even 10% of it melts, “it would rewrite world maps by flooding coastal cities and submerging many small island nations.”

Dr. Sarah Cooley, marine scientist and director of the Ocean Acidification Program at the Ocean Conservancy, spoke with Massive about the changes the ocean is seeing. “Ocean warming and glacial melt are causing sea levels to rise unevenly around the world, raising the odds that storms or tsunamis will cause higher floods with more risk of property and loss of life. Landfalling storms gather incredible amounts of water and energy from increasingly warm oceans. As a result, extremely heavy precipitation accompanies these storms, causing severe, long-lasting, dangerous coastal and inland flooding.” She described how, as oceans warm and atmospheric C02 increases, the ocean will absorb that C02. But that will result in acidification, will absorb less and less C02, resulting in less mitigation of human-driven climate change.

Cooley went on. “In [the Great Lakes region], ice fishing is declining and the last frost-free date each year is getting earlier and earlier, which seems good because it is lengthening the agricultural season, but warmer winters aren’t killing off agricultural pests as well.”

“Biologists are finding that a lot of pressures on ocean life don’t always simply add up; sometimes the pressures multiply each other’s impacts in ways that are difficult to anticipate.”

This week is Climate Week, coinciding with the UN Climate Change Summit. On September 25, the Intergovernmental Panel on Climate Change (IPCC) released its newest report. Every day this week, Massive Science will be publishing articles and interviews with scientists, policy experts, and activists about climate change, all aspects of the new report, and the future of the planet.