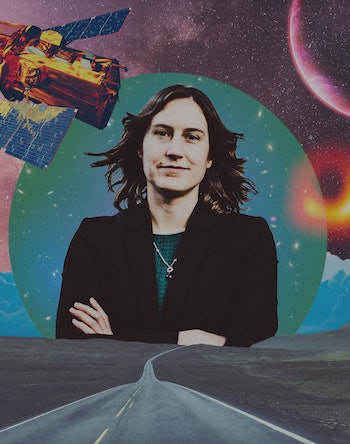 Below is a portion of Inverse’s interview with astrophysicist Katie Mack. We asked the famed cosmologist about what discoveries she feels we’re on the verge of making, and which of the universe’s biggest questions fascinates her most.

Inverse: Looking to the next ten years, is there a particular thing that comes to mind that’s being discussed and explored in the astrophysics community right now? What might we know more about in ten years? What’s the next big discovery?

There’s a huge effort right now to figure out what dark matter is. Most of us think that it’s some new kind of particle that doesn’t show up on our detectors in the way that other particles do. I spend most of my research time working on dark matter. Dark energy is, in some ways, an even bigger mystery because we don’t have as many handles on it. But, a leading idea is that it’s something called a cosmological constant, which is an idea Einstein first put out. But there are complications with that explanation, too. Hopefully, we’ll figure that out.

There are other questions that are a little bit more fundamental that might relate to dark matter and dark energy: How do general relativity and quantum mechanics work together? What is quantum gravity? This is something that people have been working on for ages, and this is why string theory was developed.

Some of our biggest questions relate to really interesting problems around black holes. There’s this thing called the black hole information paradox, which has been around for many decades. What happens to information when something falls into a black hole? There are two competing paradigms about how that works, and it sets up some really fundamental questions in physics and how the universe works.

Some of the most cutting-edge work in terms of physics theory connects to that idea of what really happens inside a black hole. I think that in the next few years, we’re definitely going to learn more about black holes, between things like the LIGO experiment and seeing black hole collisions through gravitational waves. We just saw the announcement from the Event Horizon Telescope that they have a picture of a black hole in the center of a galaxy. Maybe that’ll be something that will help us toward this quantum gravity idea. Maybe understanding dark matter and dark energy will help us to understand how everything fits together in some new theory we haven’t even thought of yet.

There are big mysteries about the universe, and we’re coming at them from several different directions. I hope that in the next few years, we’re going to have some big insights into how everything works.

Dr. Katherine J. Mack is the assistant professor of physics at North Carolina State University. On Twitter, she goes by @AstroKatie, where she shares her thoughts on science with her more than 308,000 followers. You can also visit her website. Mack is a member of Inverse’s Future 50.