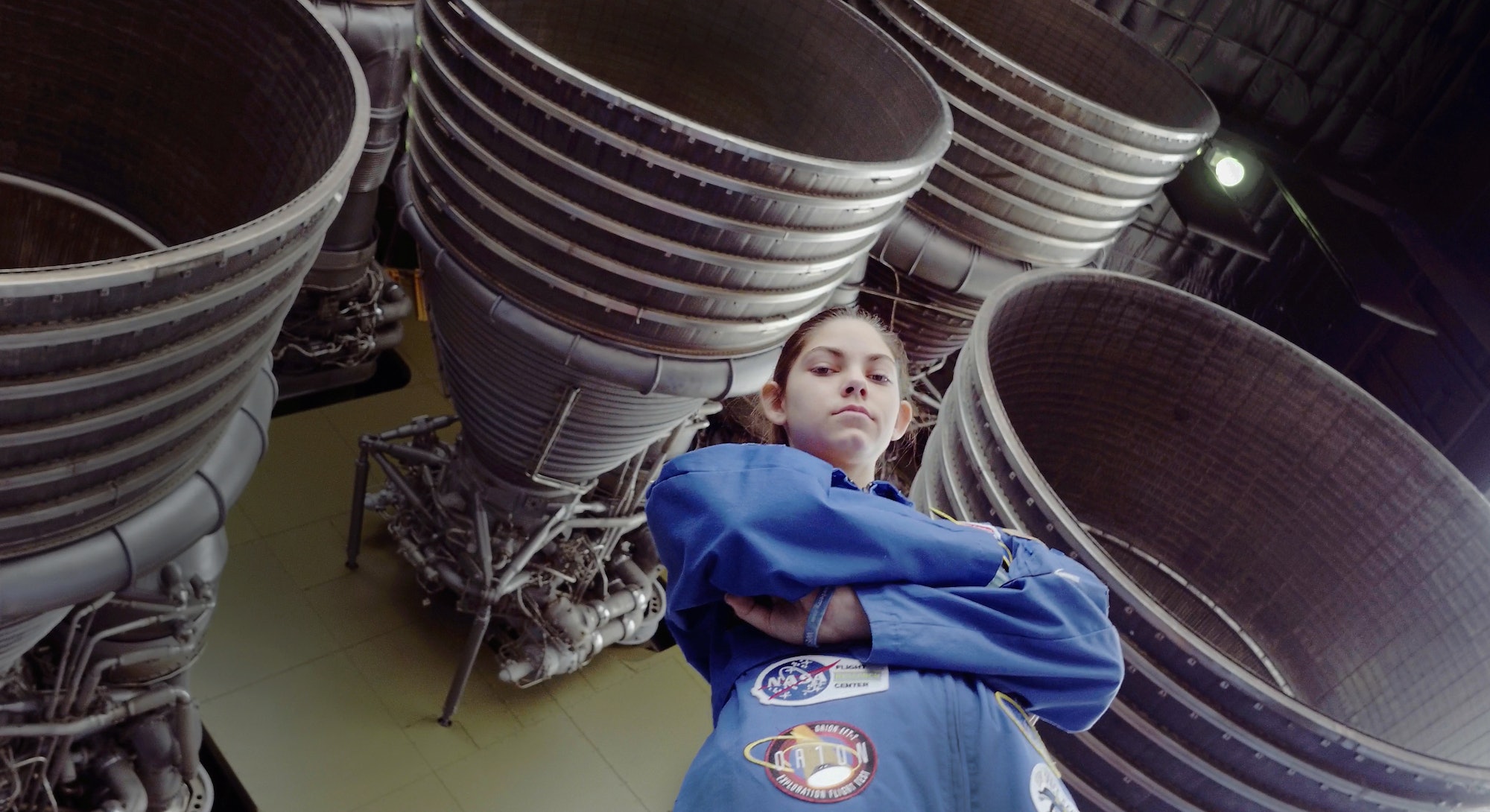 Like all teenagers, Alyssa Carson has had to make some hard choices. But as a 17-year-old in training to become the first human on Mars, hers have been more difficult than most.

While most people her age are deciding where to go to college and what to major in, Carson’s internal monologue has been a little more fraught: To seize my lifelong dream of making it to Mars, am I willing to sacrifice the chance to start a family? Opt never again to see the ones I love? Agree to undergo surgical procedures, give up an organ or two, or put myself at higher risk of cancer? Squeeze myself into a confined space with strangers and agree to be hurdled across an empty abyss for six months? Nine? How about three years?

When humans make it to Mars, where conditions are utterly inhospitable to human life, modern comforts will be at minimum some 40 million miles away, requiring a journey through a frozen expanse of dark, empty, deafeningly silent nothingness. While we talk constantly about getting to Mars, we don’t often talk about how we’re going to get back. Carson has had to acknowledge that it just might not happen.

In spite of these hard-to-swallow realities, she remains undaunted by the challenge and unwavering in her ambition to be among the first humans on the red planet. As a new voice for a younger generation of interplanetary space travelers, Alyssa has cemented herself among a small number of US-based youth pulling out all the stops to reach that goal. By her estimation, the benefits greatly outweigh the potential risks.

Alyssa’s passion for space exploration — indeed, for Mars itself — began when she was three years old, according to her website NASA Blueberry, named for her call sign. She pegs her fascination with the red planet to a children’s television series called the The Backyardigans — specifically to an episode titled “Mission to Mars.” It’s a story her father Bert Carson tells Inverse is the only fitting explanation for the fixation his daughter developed with Mars at such a young age.

“Really I just kind of got that because she had this big “Mission to Mars” Backyardigans poster in her room, so I can only assume that’s where it came from,” he says. “I just don’t know where else she would have been told about Mars at such a young age.”

Alyssa has moved along her trajectory toward Mars at an astounding pace. At age 12, she was selected to participate on the MER 10 panel in Washington DC to discuss future missions to Mars, which she has described as “home.” At age 16, she became the youngest recruit to enter and graduate the Advanced Possum Academy with Project PoSSUM (Project Polar Suborbital Science in the Upper Mesosphere) — a training program for would-be astronauts. Her program administrator admits that taking a chance on such a young applicant was a risk, Alyssa’s particular set of skills and qualifications were undeniable.

“It’s very common for people to have ambitions of space flight or even going to Mars from very young ages,” Dr. Jason Reimuller, the outfit’s Executive Director of aeronomy research and education program, tells Inverse.

“I think what struck us with Alyssa was her internationalism at that age, partly the way she communicated the science that could inspire people, and the different kinds of languages she could speak, including Chinese. She had a very unique background in that way, and we decided it was worth it to try to see if this would be a good opportunity to engage students of her age.”

With Project PoSSUM, a research non-profit that occasionally collaborates NASA and the Canadian Space Agency, Alyssa received hands-on space suit training, underwater survival training, microgravity training, and decompression training, she says. She’s also enrolled in collegiate-level courses in space physiology, space atmosphere, and researching and instrumentation (classes, it’s worth noting, she takes alongside her typical school workload). The program is helping her lay the foundation for her continued education in astrobiology, which she hopes will be an asset to her future crew.

No matter what level of expertise she gains, Alyssa’s most difficult challenges will be personal ones. She acknowledges that her application process for a Mars mission could be hindered by the decision to start a family. Both she and her father acknowledge the potential dangers of emotional “distractions” imperiling herself or her crew during her time away from Earth. After all, a return to our planet to rush to the side of an ailing loved one isn’t a journey she’d be able to make for some time — potentially years, if at all. That notion is particularly poignant for Bert.

“Best case scenario for me, I don’t see her for three years,” he says. “Worst case, something happens, or they go there and stay there to colonize Mars. It’s not easy as a parent. But at the same time, it’s her dream and it’s her passion, and she’s gotten me to realize how important this is for us to take that baby step for the human race. I realize this is bigger than the two of us and that I have to let her go.”

Some of these costs seem more inconsequential to Alyssa than others, at least at present. Assuming a return trip from Mars is possible, Alyssa has a good sense of humor about waiting until after the mission to pursue a family, assuming that’s something she’ll want. If all goes according to plan, she would be in her mid-30s at the time of her return, a perfectly fine time to “settle down” as any.

“I wouldn’t say I’d be ancient when I get back,” she jokes.

“I wouldn’t say I’d be ancient when I get back.”

Alyssa has also had to consider the potential for long-term physical repercussions of the journey, which could manifest during or after the trip. Bert says there’s a possibility that she will have to undergo prophylactic surgical procedures, such as the removal of her tonsils, as preventative measures prior to embarking on any mission.

Of these and any other sacrifices that may come at the expense of interplanetary space travel, Bert says: “These are talks that I’ve had with her all along the way.”

As for the journey itself? Alyssa describes the long voyage to Mars and back — assuming the trip isn’t a one-way ticket as some have stated it might be — with the coolness of describing a trip to the beach.

“It’s six months to get there, and then the astronauts would stay on Mars for a little over a year,” she says. “And then it would be around nine months back. And that’s all just due to the rotation of the planets, the timing, and having Mars as close as possible for when you’re launching in between the planets.”

Even Elon Musk, an aspiring carrier of Martian pioneers, has underscored the dangers of a Mars mission, famously saying in 2016 that it will be “dangerous and probably people will die.” Asked about these potential dangers — and indeed, possible death — Alyssa remains confident and undeterred.

“I understand the risk and what’s going to be a part of the mission,” she tells Inverse. “I understand what’s all part of it. And there are lots of risks, but I definitely think that we as humans are more than capable of sending someone to Mars and bringing them back safely.”

Her fate accepted, all Alyssa can do now is focus on what she will bring to the table. As a future astrobiologist, Alyssa expects her research on Mars will include testing water and soil samples, studying the planet’s origins, and attempting to learn more about our solar system as a whole.

“Astrobiology is a little bit broad and covers a lot of biology, chemistry, physics, geology — a little bit of all the sciences — and that’s really why I want to go into it. With the mission to Mars, we don’t know 100 percent everything that we’re going to find there,” Alyssa says. “So having someone who’s able to do all the different range of sciences would be super helpful.”

As it stands, a crewed mission to Mars is still more than a decade out, so Alyssa has time to build her resume and acquire the bachelors degree in STEM that NASA lists as a minimum requirement for its astronaut program. Not that she’s necessarily banking on NASA to get there: While she collaborates and speaks on the behalf of a network of NASA affiliates, she is not (as has been erroneously reported) being groomed by NASA for a mission to Mars. That very well could happen, unless another company sponsors her first. Her website lists her as one of seven ambassadors to Mars One, a private Dutch company among the growing number claiming to be in the business of interplanetary colonization together with SpaceX, Boeing, and Blue Origin. She has high hopes for the Mars-bound rocket NASA already has in production, but she says she “can’t doubt Elon Musk and his capabilities.”

“She’s working them all,” her father teases.

For now, she’s hoping to be the first “teen” in space, she says. By achieving this goal, she says, she’ll be able to marker a new milestone for a generation too young to remember the inexplicable wonder of the Apollo 11 landing in 1969, when astronauts Neil Armstrong and Buzz Aldrin first set foot on the moon.

“With that we’re hoping to inspire the next generation,” she tells Inverse. “Because in the space industry, a lot of our heroes are the Apollo astronauts who walked on the moon, and they’re starting to get older. It’s almost like needing another someone who looks like me, someone else to look up to for the next generation of kids who may not know the Apollo astronauts as well as people nowadays.”