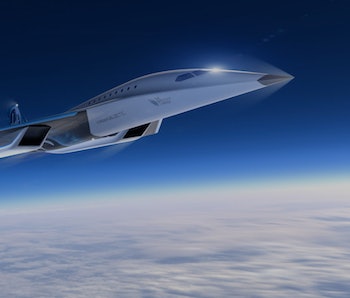 Virgin Galactic announced on Monday plans for a new high-speed aircraft capable of reaching Mach 3 speeds, or a little over 2,300 miles per hour.

The supersonic jet would be built in partnership with Rolls-Royce and appears to expand the company’s purview into commercial aviation along with space tourism.

Having received approval from the Federal Aviation Authority (FAA) for its Mission Concept Review (MCR), Virgin Galactic has proven to the government that its supersonic aircraft has “clearly established needs, objectives, and top-level functional/performance requirements.”

George Whitesides, the Chief Space Officer of Virgin Galactic said in a press statement that the company is, “excited to complete the Mission Concept Review and unveil this initial design concept of a high-speed aircraft, which we envision as blending safe and reliable commercial travel with an unrivalled customer experience.”

The MCR presented to the FAA, as well as a representative from NASA, describes a plan for an aircraft that can hold 9 to 19 people at an altitude above 60,000 feet. The aircraft would also allow for customizable interiors, shaping up to either a Business or First Class experience.

The Concorde, which is mentioned twice in the press statement, could offer some clues into Virgin Galactic’s plans. A fascinating remnant of aviation history, the British-French plane was the second (and last, as of this story) supersonic commercial jet to ever fly.

A project over thirty years in the works which lasted in commercial markets from 1976 through 2003, the Concorde’s stunning speeds and sleek design were symbols of national pride throughout England. A promotional film boldly called the plane, which was capable of flying from New York to London in under three hours, “The World’s Greatest Airliner.”

But superlatives do not pay the bills, and the Concorde ran into a number of real-world problems, ranging from the oil crisis of 1973 to a fiery crash on July 25, 2000, when debris on a runway caused the plane to catch fire and explode.

There also was the matter of it being expensive to the point of elitism. Lawrence Azerrad, who wrote a book in 2018 on the plane’s design and abilities, told CNN that the plane “wasn't originally intended to be this exclusive bird of the rich and famous,” when tickets on a 100-seat airplane cost more than first-class elsewhere, that is the likely outcome. The flying downturn after the September 11th attacks was the final blow for the Concorde, which saw its last flight in 2003.

The remaining Concorde now grace the halls of museums.

The press release states that Virgin Galactic is designing this aircraft for “a range of operational scenarios, including service for passengers on long-distance commercial aviation routes.” It goes on to note that it would “take off and land like any other passenger aircraft and be expected to integrate into existing airport infrastructure and international airspace around the world.”

The Inverse Analysis — Is Virgin Galactic building another Concorde? It’s a surprisingly Earth-bound idea from a company primarily known for sub-orbital flights around the planet. But considering the company’s closeness with Virgin Airlines, also owned by billionaire Richard Branson, Galactic wouldn’t exactly be leaping into the great unknown.

Branching into air travel in 2020 isn't exactly the hottest ticket, after all. The Concorde was ultimately felled by September 11th, when over 40% of Americans were less eager to fly. That pessimism over terrorism was eventually comforted through rigorous screening at airports, down to shoes. The fear of Covid-19 will likely prove to be longer-lasting and, until a widely available and socially accepted vaccine is in place, airplanes fit the bill as a perfect area for the virus to spread.

Even historians of air travel call Covid-19 "a novel challenge." Could smaller, faster flights be a novel solution? It looks like Virgin Galactic wants to find out.