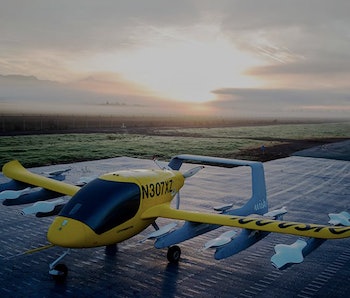 The government of New Zealand has announced a formal agreement with an American electrical take-off-and-landing (eVTOL) company called Wisk to begin trials, which both hope will pave the way for regular commercial use. Wisk's eVTOL, known as Cora, is a small self-flying vehicle meant to fly around 25 miles on a single charge.

“Wisk has been working with the Government and people of New Zealand since 2017," said Gary Gysin, Wisk's CEO, in a press statement earlier this week. "We are excited about what this agreement and trial represents in our journey to bring safe everyday flight to everyone. New Zealand values innovation, excellence and technology that is safe for people and the environment. Being selected as the partner for this program is an honor and testament to our hard work and steady progress.”

From New Zealand's perspective, the "Government sees great potential in the development of an innovative unmanned aircraft sector in New Zealand and we are in a prime position to work with globally-leading companies here to safely test and go-to-market," said Canterbury, Research, Science and Innovation Minister Megan Woods, in a statement of her own.

“As well as the economic and social benefits the growth of this industry offers, we also share Wisk’s vision of a greener, emission-free way for Kiwis and visitors to New Zealand to get around. Enabling the emergence of an entirely electric air taxi service is a natural fit with New Zealand’s zero carbon goal by 2050."

Cora won't exactly provide mass transit. According to the Mountain View, California-based company's website, a Cora can hold exactly two people. But as a self-flying vehicle, neither of them need be a pilot. It's meant to fly 1500 feet above ground, far lower than the 35,000 that is the common cruising altitude of most commercial aircraft on the market today.

Rather than an airplane, a better comparison point for a Cora might be helicopters, which tend to stay below 2,000 feet. But while helicopter rotors can allow their vertical take off, a Cora achieves the same feat through 12 independent lift fans. It also travels slower than helicopters, moving through the skies at around 100 miles per hour while a typical helicopter flies at 160 MPH.

"We see this agreement as a sign of confidence in our product and abilities to develop and deliver a safe and reliable air taxi service, starting in New Zealand," Gysin added in his statement. With a Memorandum of Understanding (MOU) between the comapny and the government signed, preparations have now begun for the trials to start in New Zealand's Canturbury region. No timetable for the tests has been given.

Wisk, which is an independent company with financial backing from Boeing, is far from the only eVTOL company attempting to prove that the technology has a viable future. Joby Aviation, another California-based startup, recently signed a deal with Uber to form an "aerial ridesharing parternship" program, the details of which will be clear to the public by 2023, the company hopes. An entire burgeoning industry has formed in hopes of cashing in on this future industry, with a dash to become first that at times can seem like a race to nowhere. With an MOU signed, Wisk is betting that a small start will turn into real passengers sooner, rather than later.

This article was corrected on February 24 to accurately reflect the financial history of Wisk.