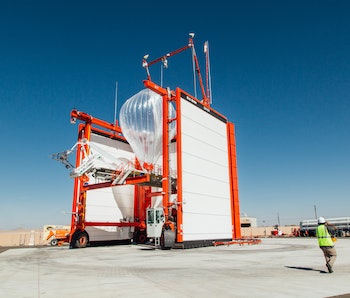 During a time of unprecedented crisis, do Americans trust big tech companies to make giant changes in their lives? The polling is mixed: a Harris poll from April 23 showed that 38 percent of people say their view of the tech industry has improved during the Covid-19 crisis, while a poll from Edelman shows that trust in CEOs, generally, has plummeted.

These surveys suggest that people are growing tired with personalities and are more interested in results, which is where Loon, the balloon-based internet connectivity company owned by Alphabet, could make a huge difference.

Loon wants to solve a major problem: getting high-speed internet to rural areas. It’s got a unique solution: high-altitude balloons launched into the stratosphere, which together, create wireless internet at 4G speeds.

"My colleagues had to believe I wasn’t completely on crack, which took a little bit of convincing."

Loon began as a project under what was then known as Google X, the experimental wing of the search giant before a corporate restructuring placed it under Alphabet. The idea of Loon, first known as Project Loon, was on Google’s radar in 2011, and was first made public in 2013 through a feature in Wired.

The name comes from how ludicrous the idea sounded at first, progenitor Rich DeVaul told Wired at the time. “My colleagues had to believe I wasn’t completely on crack, which took a little bit of convincing,” he told the magazine.

Eventually, they were convinced. Now, Loon has emerged from Google X umbrella to become a fully-fledged Alphabet subsidiary.

And on May 6, 2020, the company announced a major new agreement with AT&T.

How does Loon work?

Control of their balloons is crucial to Loon’s work. The balloons have to be as light as possible, but also resistant to outside changes. Each Loon balloon is the size of a tennis court, or around 78 feet long, and are built out of the plastic polymer polyethylene, which is used in everything from bulletproof vests to grocery bags. Guided autonomously using data from NOAA (National Oceanic and Atmospheric Administration)and powered by solar panels, they find wind currents and can rise and fall as needed to get into the right location.

Once there, Loon’s website compares their connective technology to a standard cell tower. “The difference is our ‘towers’ are constantly moving with the winds,” the company says.

What does this new deal mean? Can I use Loon?

Right now, only if you’re in a really bad spot.

According to Loon’s Medium post on the AT&T deal, the company has “successfully integrated the Loon system with AT&T’s network.”

That integration will allow Loon to “provide service to a third-party mobile operator, assuming they have a standard international roaming relationship with AT&T...In a disaster scenario, this will save valuable time and enable Loon to simultaneously serve several, if not all, the mobile operators in a market.”

JR Wilson, AT&T Vice President of Tower Strategy and Roaming, is quoted in the Medium post as saying that “in situations when disaster strikes — and our customers need connection more than ever — rapidly restoring communications is critical. We’re pleased to work with Loon to make this an ongoing reality for customers around the world.”

So if you’re in a disaster zone where cell lines are overwhelmed or destroyed, there’s a chance you could get to use Loon. You might not be happy to have the opportunity to use it, but happy that it’s there nonetheless. This could change in the future.

How do I know Loon will work?

Since leaving its experimental phase in 2018, the company has deployed its balloons in a number of crisis situations. When an 8.0 magnitude earthquake hit a remote region of Peru in May 2019, power was knocked out throughout the Peruvian jungle. The company had already established its ground infrastructure in Peru, allowing their balloons to waft in within 48 hours and provide steady service until normal operations were functional.

“Response is actually an imprecise way to view our unique capabilities,” the company said in a Medium post reviewing its Peru operation. “Preparedness is a more accurate way to understand them. It takes a lot of planning and setup to make balloon-powered internet work. Before we can begin providing service, we need to install ground infrastructure, integrate with a mobile network operator’s (MNO) network, secure regulatory and overflights approvals, and of course launch balloons and navigate them to a desired location. However, with Loon already active in a country, as is the case in Peru, our ability to respond to a natural disaster can be measured in hours or days rather than weeks.”

What’s next for Loon?

As the company notes in its Peru post, “the promise of Loon is to provide service to the billions of people who need it every day, not just when a disaster hits.” The company’s first play to become an everyday service provider is in Kenya. Of course, the entire world is currently amidst the crisis of coronavirus and Covid-19, which strengthens Loon’s hand. The company was approved to operate by the Kenyan government on March 23, 2020.

Kenyan President Uhuru Kenyatta was in favor of the balloons, telling the local press that they “will carry 4G base station and have the capacity to provide wider signal coverage, this intervention will enable Kenya to retain her competitive advantage in ICT [Information and Communication Technology] and innovation in the midst of the current crisis.”

Loon CEO Alastair Westgarth described the company’s next actions in a Medium post.

“In the immediate term, this means that we will begin dispatching existing airborne balloons, as well as preparing new ones to launch from our launch sites in the United States, and navigating them to Kenya on the stratospheric winds 20km above Earth. This process takes time, and we expect it to be a number of weeks before Loon’s balloons arrive in Kenya. Once there, we will conduct the final stages of network integration testing with Telkom Kenya. Following that, we will be able to begin providing service to Kenyans.”

Coronavirus has also affected Loon as a company—not even the backing of a massive conglomerate like Alphabet can hold off global economic shifts. Westgarth notes that in “the short term,” the company has “reduced operational capacity.” But given that demand for cheap cell infrastructure will likely only rise, the world is watching Loon’s experiment in Kenya. If it can succeed there, with a population of over 50 million people, chances to replicate that success will likely present themselves around the globe.

The Inverse Analysis—Loon has grown rapidly in the last two years, signing major deals with the potential for a new revenue stream for Alphabet. The Covid-19 crisis has pushed infrastructure to its limits, and outsourcing some cell reception to balloons could be a tempting choice for rural areas unable to pay top prices. If its Kenyan experiment succeeds, there's no telling where Loon's next permanent home might be.