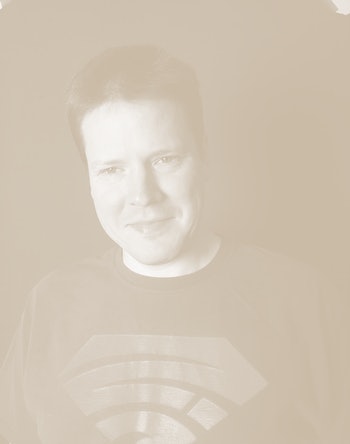 “A Deaf Blind poet doesn’t like to read sitting up.” So begins John Lee Clark’s magnificent 2018 poem, “A DeafBlind Poet,” which could function as a kind of personal statement for its author.

Yet the poem’s author, Clark, is contributing, if not to “society,” then to the world. Most crucially, he’s doing it on his own terms.

“I am a typical DeafBlind person in that I’ve never held a salaried position,” Clark, who is 41, writes in an email to Inverse from his home in St. Paul, Minnesota.

Nonetheless, this unsalaried, non-gainfully employed poet’s star is quickly rising. In May, he won a National Magazine Award for his profound, horizon-expanding essay on tactile art in Poetry. Then, in October, he was named one of 20 recipients of a prestigious — and, at $50,000, not ungenerous — Disability Futures Fellowships from the Ford Foundation and Andrew W. Mellon Foundation, which aims to “increase the visibility of disabled creative practitioners across disciplines and geography and elevate their voices individually and collectively.” Now he’s putting the finishing touches on a yet-to-be-titled collection of essays along with How to Communicate, a collection of poems including three that have appeared in the Paris Review and another in the New York Times.

This story is part of the New Pioneers series.

“His poetry is astounding,” praises Jillian Weise, an author and disability rights activist who published his poem in the New York Times last year (which she has also published as a Braille bookmark). Because most contemporary poetry loses its line breaks, stanza breaks, and even indents when digital services such as Bookshare convert books into blind-accessible formats, Clark has three options when it comes to reading poetry: Project Gutenberg (housing older works in the public domain), the Braille Library’s list (which he describes as “limited”), or to have it transcribed, which is costly.

“In order to achieve autonomy, we need access to language to thrive.”

“Think about that for a minute,” says Weise. “And yet, he is one of the most exciting poets writing right now.”

Consider further: Poetry and prose may not even be Clark’s most vital contribution to, let’s call it, Not Society. In addition to his work as a writer, he is a leading practitioner, teacher, and all-around herald for Protactile, a groundbreaking language of touch. Founded in Seattle in 2007 by two DB educators Jelica Nuccio and aj granda, Protactile shares elements in common with American Sign Language (ASL), with the significant innovation of what’s known as tactile back-channeling or reciprocity, through which a user indicates her response — agreement, disagreement, laughter, and so forth — and makes words by applying taps, tugs, rubs, and other motions on her correspondent’s hands and body.

“If you don’t have feedback, it is harder to keep on ranting or rhapsodizing,” writes Clark, whose first language as a deaf child in an all-deaf family was ASL. “What we all agreed on was that standard, visual ASL was no good. Only 30 percent of it is decipherable by touch. We had been following ASL by placing our hands on the speaker’s hands for centuries. We should have known that what we were doing was tantamount to visual lipreading, a slippery endeavor at best, impossible for most.”

So what did Protactile change? Clark gives the example of telling a story about chopping down a tree in PT. “When my hand-axe starts to chop against your arm, you are proprioceptively receiving this message,” he explains in an unpublished essay on Protactile’s history. “This is no longer a merely tactile experience. What is being utilized is dynamic, ‘depth’ perception — you are the tree, and you feel the axe on both of its sides, the back end that your hand there is following as its front edge as it collides against your arm.”

Indeed, Protactile (PT) is forging new linguistic ground. In a 2019 study, Drs. Terra Edwards and Diane Brentari, whom Clark assists on their research, writes that “PT DeafBlind language-users are, for the first time in their history, communicating with one another via reciprocal, tactile channels” and “creating an emerging grammar.”

Clark, who assists on two additional National Science Foundation grant projects related to the DeafBlind experience, goes further: “Subtle though the shift at first seemed to us, it is what has flooded us with language. It has given birth to poetry.”

He adds, “We are turning toward increased connection in a world where so many people are being isolated and separated from one another and forgetting what human contact is all about.”

Nuccio, his closest DeafBlind colleague in the field, agrees. “We need PT as a part of our empowerment in order to live our life and make decisions for ourselves,” she expresses in a 2016 video blog with granda. “Language is key to our quality of life,” the English transcript reads. “In order to achieve autonomy, we need access to language to thrive. PT is not touch signals. PT is and includes” — Nuccio raises granda’s hand and she wiggles her fingers — “philosophy, attitude, language, and techniques.” She high-fives with granda, who then taps her leg with understanding: uh-huh, uh-huh.

It’s hard not to be wowed by Clark’s incredible output. He is also, among other things, the author of a book of essays (2014’s Where I Stand: On the Signing Community and My DeafBlind Experience), editor of two anthologies of Deaf literature (2009’s Deaf American Poetry and 2013’s Deaf Lit Extravaganza), translator, Braille instructor, architecture consultant, swimmer, homeschooling father of three, partner, Bruce Lee buff, cooking enthusiast, and “lap for our two cats.” Several times a year he teaches a popular month-long seminar, conducted entirely via an email listserv, called “Introduction to Protactile Theory.”

Such versatility, Clark explains, is not uncommon among his DB peers. Because of the relative novelty of the Protactile language, “it means many of us in the movement are Leonardo da Vincis,” he writes over email, a medium at which he’s uncommonly prolific. In these emails, he is a warm and animated conversationalist, sprinkling listserv slang like “LOY” (laughing on you) and “PT cheers” just as I imagine he does in the hundreds of messages he shoots off a week to other correspondents on and off the multiple listservs he moderates for the DB community. (Indeed, during our two weeks of emailing, I was consistently amazed — and buoyed — by his voluminous, rangy replies.) “It’s not the time to be a specialist,” he writes.

Yet, he cautioned in that email, “it would be a mistake to say, ‘Whoa, you’re all geniuses! You’re all superheroes!’ Okay, we ARE geniuses and we ARE superheroes, insofar that ALL human beings are.” (“Can’t I pick my nose,” he complains in one poem, “without it being a miracle?”)

“John is a thought leader in the DB/PT communities, and his writing reflects that,” noted Cristina Hartmann, a DeafBlind fiction writer whom Clark helped to bring into the DB fold last year. This included entry into an email listserv called DeafBlind Studies, which she describes as “a safe space and an essential link between all of us.” In recent days the listserv, which is DB-only, has fostered lively discussions on politics, Braille reading speed, and even puzzles.

“So many popular hobbies and games require sight or hearing, so it’s tough to find DB-friendly diversions,” relays Hartmann. Members on other listservs, like DBMinn, provide weather reports, Covid updates, and secrets for delicious Thanksgiving dressing.

As distance-learning has become the pandemic norm, text-based formats such as the listserv offer an alternative to the Zoom-mediated classroom. Writing for the Los Angeles Review of Books, Michele Friedner, a social and medical anthropologist at the University of Chicago who took Clark’s Intro to PT Theory course, notes that despite its “pared-down, bare-bones perhaps” quality, the minimalist, text-based class “led to the creation of new kinds of contact, touching, and close engagement.”

New kinds of contact could be Clark’s DB MO. Still, he describes his own journey as “rather complicated.” As he became blind from Usher Syndrome as an adolescent, he felt alienated by his sighted Deaf classmates.

"Books became my friends and provided me shelter.”

He considers his role as a poet within a lineage of DeafBlind forebears. “Virtually . . . every significant DeafBlind historical figure was a poet,” he related in a Poetry International roundtable. Inventor Morrison Heady, educator Laura Bridgman, Richard Kinney, Robert J. Smithdas, Geraldine Lawhorn — “poets all of them, in addition to the things they were more famous or tokenized for.”

This vast knowledge and understanding of the DB community, its history, and Protactile is recognized by Hartmann. “He has spent years collecting writing from DB people throughout history, all over the world, for an anthology,” she enthused in an email. “Hell, I suspect he has the biggest private collection of DB writing in the world.”

Jillian Weise speaks admiringly of his aesthetics and his “audacity as a disabled poet who is doing really futuristic work.” One such example is the slateku, a form he invented and is based on the Braille slate. Another series, she told me, are “erasures that are interventions on extremely ableist, audist poems from the past. I asked him once, ‘Now John, why are you doing these erasures from the 19th century? Because, like, no one's reading these people.’ And that is when he told me, ‘Jillian, how would I have access to the 20th century? I am in the 19th century, because it is what I have access to.’ Conceptually, the fact that he's doing erasures from the 19th century, at the same time as he as an artist himself is erased from reading the 20th century, just points to the problem.”

Most striking among these erasures is “The Rebuttal,” which was drawn from Lydia Huntley Sigourney’s 1827 poem “On Seeing the Deaf, Dumb, and Blind Girl, Sitting for Her Portrait.” In a 2019 video, Clark performs a Protactile version of the poem. Sitting with Nuccio and another PT language-user, Heather Holmes, he heart-pumps and tug-presses, lifting their quaking hands above their heads — the three grinning in a kind of hard-won, ecstatic triumph — as the English interpreter concludes: “Philosophy fails to / sway this future child.”

You could be forgiven for having detected a thread of protest running through Clark’s works. But “rejection is a better word for me than protest,” he explains. “Often protest ends up reinforcing the legitimacy of what is protested. Banging on the closed door and shouting, “You have to let us in!” — well, if you manage to ram the door down and you gain access, one thing you are doing is saying that the room behind the closed door is so important.

"You may replace people who were in that room, but you end up sitting behind their desks. Rejection is different. Rejection is, ‘Forget about that room.’ We go off somewhere else and build something new.”