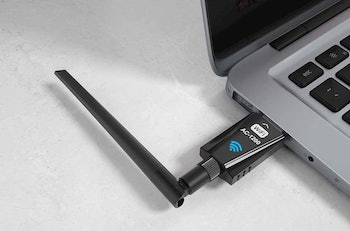 We're doing incredible things with Wi-Fi these days, like designing AI machines that use a wireless internet connection to see through walls — i.e., X-ray vision. With wireless technology that's come this far, it's no surprise that it's now entirely possible to get faster and more reliable internet connectivity with an old computer — you just need the right tools. That's where the best USB Wi-Fi adapters come in. These dual-band dongles boast speeds of up to 1300 megabits per second, and they'll be compatible with a wide range of operating systems.

The best USB wireless adapters come in a range of speeds, which are usually measured in megabits per second (Mbps). As a frame of reference, sending an email requires 1 Mbps, while streaming an HD video takes 10 Mbps, and online gaming is optimized at around 25 Mbps. While that might not seem like a lot, bandwidth gets eaten up fast when you're multitasking, and it'll go even faster if there are multiple people or devices on your Wi-Fi connection.

Next, you'll want to consider range. For the most part, the bigger the Wi-Fi adapter, the more effective it'll be at picking up your router's signal from farther away. That said, larger adapters with multiple antennas are clunkier and more difficult to travel with, so if your computer is set up close to your router, you can probably get away with a small, unobtrusive dongle instead.

Last but definitely not least, always check the compatibility. While all these units should work for both laptops and desktop, you'll want to make sure the software works with your existing operating system. Likewise, dual-band capability — which all these options have — will ensure that you can work with both 2.4GHz and 5GHz frequencies. With all that in mind, these are the best USB Wi-Fi adapters for faster connectivity that won't let you down.

The Techkey USB adapter is the number one pick because of its decent speeds, wide operating system compatibility, and low profile that takes up minimal space on your desk. And despite all that, it's still remarkably affordable, making it a great all-around pick. Reviewers report that it's easy to install — even if you're not much of a "tech" person — and you can do so by downloading the driver from the website or by using the accompanying CD.

One reviewer said: "It took just a couple minutes to get it set up and I immediately saw the difference in speed. My files were downloading quickly. The antenna moves freely so I am able to put it into a good position relative to the computer so it isn't sticking out. I would recommend this to anyone who needed to add WiFi to a computer without it."

If you're looking for compact, convenient, and affordable, the TP-Link Mini is the way to go. This small dongle boasts a low profile and is virtually undetectable when plugged into your computer, but it still offers up to 433 Mbps on a 5GHz connection. It also has built-in encryption to keep your wireless connection safe, as well as a fast online or CD driver installation that reviewers call "super easy" without requiring any "technical knowledge." Finally, since this one can be left in place while you transport your laptop, it's the best option for travel.

One reviewer said: "Plugged it in, and it immediately went to work. [...] It did not flicker once all night. No slow downs. I had forgotten what it was like not to have to load up my home page just to see if I was still connected or not."

For those who need an extra fast connection for gaming or streaming 4K videos, the dual-antenna adapter from Techkey is a fantastic option. It offers speeds of up to 1300 Mbps for both laptops and desktops, and if your computer is on a wired connection, you can create a hotspot with the SoftAP feature, which will boost Wi-Fi to mobile devices. The adapter can be plugged directly into laptops, but it also comes with a stand, so you can plug into desktops or place it farther away from laptops for more elbow room.

One reviewer said: "Night and day compared to my old adapter. Great for video calls and gaming, and signal very rarely drops."

4. The adapter with the most range

Get dual-band wireless in just about any room of the house, thanks to the Trendnet USB adapter. Not only do the four antennas offer the most coverage on the list, but this option also uses beamforming technology to direct the strongest signal to a specific receiving device, instead of spreading it in all directions. Plus, the longer cord lets you place the unit across the desk and out of your way The setup is guided and intuitive, and you can install the driver via the Trendnet website or with the accompanying CD. And even though it's an investment, reviewers say it's "worth it" for spread-out homes with weak signals.

One reviewer said: "My computer room is on the far side of the house. Maybe a good 35 feet from the router. My old adapter would take almost a minute to load a few seconds of a 480p video. Not anymore. 20 minutes of 4k video loaded in under 10 seconds."