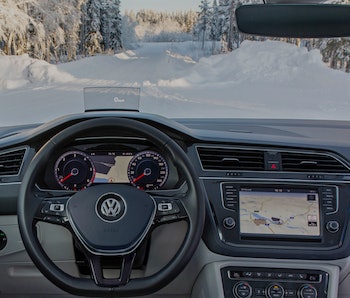 If you own a car and you live somewhere in the world where it snows regularly, you know that going for a drive in the winter involves an annoying extra step: getting rid of a layer of vision-obscuring frost covering your windshield. Volkswagen’s new solution is to put literal silver inside the windshield. You know, the precious metal.

As the company explained in a release, the climate windscreen features a “wafer-thin electrically conductive layer of silver within the laminated glass.” When turned on, a small electric current runs through the transparent silver, helping to defrost the window. Volkswagen says the silver is better than systems that use a system of tiny wires to conduct electricity, because those can be visible in oncoming traffic.

In addition, the climate windscreen has extra filaments that prevent windshield wipers from sticking to the glass in frosty weather. Volkswagen also claims the silver blocks “up to 60 percent of the summer heat,” which can reduce the temperature inside by 15 degrees.

The special silver windshield is available for the Golf, Golf Sportsvan, Tiguan, Sharan, Passat, and Passat Variant models for an extra fee, with prices starting at a little under $400.

Or, you know, you could save the money and try one of these free tips instead.