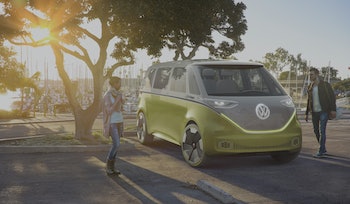 Volkswagen took the wraps off its I.D. Buzz concept microbus on Sunday, and it looks radical. Described as “a Microbus for a new era,” the zero-emission, all-electric vehicle takes the stylings of the classic sixties icon and upgrades it for a whole new generation. At the North American International Auto Show in Detroit, Volkswagen explained that the concept represents the company’s all-electric ambitions, with the end goal of selling one million next-generation electric cars by the year 2025.

It might look like some sort of retro-future mashup, but make no mistake: the I.D. Buzz’s underpinnings represent the cutting-edge in modern technology. The car has a driving range of 270 miles between recharges, a heads-up displays projects information through augmented reality, and a center console tablet provides entertainment through Bluetooth-connected speakers.

But perhaps the most impressive bit of tech comes from the car’s fully autonomous driving capabilities. Press down on the steering wheel, and it will retract into the dashboard and enter “I.D. Pilot” mode. Lasers, radar, ultrasonic sensors and cameras all communicate with the cloud to drive the vehicle, and the lighting switches to warm, ambient mode so the front passengers can turn around and relax with their friends. In driving mode, even the steering wheel itself is futuristic: it’s more of a giant touch control, which the driver can use for turn signals and other basic functions.

That interior is going to be huge, thanks to some engineering trickery based on the modular electric drive kit. The 111kWh battery located under the floor is capable of charging to 80 percent capacity in around half an hour, while its long 129.9 inch wheelbase helps with cornering ability. None of this compromises on power, though: the I.D. Buzz can accelerate 0 to 60mph in five seconds.

“The I.D. BUZZ is not a retro design on 22-inch wheels; rather, we have taken the logical next step forward in development using what is in all likelihood the most successful design of its kind in the world,” Klaus Bischoff, Volkswagen’s head of design, said in a statement.

The car is capable of recognizing who is in the car using a digital key stored on the smartphone. It senses when you get near the door, opens it before you arrive, and even remembers your air conditioning settings and favorite radio stations. Using the central tablet, users can change entertainment settings and even input intermediate destinations into the routing system.

The vehicle is just a concept, but Volkswagen seems cautiously optimistic that some of the car’s biggest features could appear in less than a decade’s time. The “I.D. Pilot” mode, for example, “could make it into production by 2025.” That’s a pretty bold timeline: while Tesla seems to think full autonomy is possible by the end of the year, one Toyota executive thinks full autonomy is years away.

Either way, it’s clear Volkswagen has some big ideas for how to revive some of its most iconic designs for the future.