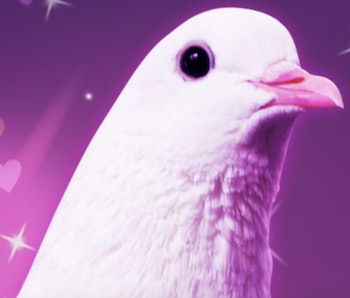 Creativity is a weird thing. An artist can plan and plan, but once they put pen to paper, or lips to an instrument, or begin sketching their first character design, the entire project can suddenly shift. Once the ideas leave a person’s mind, they can radically change on paper. And even weirder than that? You have zero idea how any of it will be perceived.

A perfect example is Hatoful Boyfriend, a dating simulator about a human girl in a school full of pigeons. It's free to play now for Xbox Game Pass subscribers on PC.

Hato Mao, who created Hatoful, didn’t mean to create an international sensation when she released her game. She wanted to make a simple parody of otome games, otherwise known as visual romance novels. Romance novels, as one fan wrote in a Guardian essay defending the genre, “do not concern real life.” Rather, they delve into the absurd.

For people who enjoy that type of delving, getting caught up in the world of otome games and romance novels can hit buttons like nothing else. It’s the type of passion that can be open to gentle parody, which is how Hatoful started.

“The idea of Hatoful Boyfriend came to me in 2011, the day before April 1. I wanted to learn how to create visual novels, and I thought I should start with something short, simple. I decided to make a visual novel about birds, because since childhood I adored them, especially pigeons. In addition, I like to write scripts more than draw, so it was much easier for me to use pictures of pigeons rather than draw people,” she said in an interview with the Russian website Look at Me.

She goes on to describe the game as “originally a silly joke” which very quickly became a big hit. The site hosting the game crashed as word of a pigeon dating sim made its way through social media. With a hit on her hands, she decided to develop the game further.

A few months later, a newer iteration of the game came out. Less of a personal gag, Mao had learned that people really responded to her game about dating pigeons. So she decided to really give people a game about pigeons, one with a fully-fleshed out world and dark secrets to uncover.

After a player gets through the bird-filled puns (teachers saying “Is everybirdie here?” is just solid writing) and meets all the eligible birds of St. Pigeonation’s, like the flirty Yuuya Sakazaki or the slightly mischievous Ryouta Kawara, they get a chance to date and the game ends. Or does it?

It does not. After the credits, Hatoful Boyfriend takes a much darker turn, also in line with some otome games. In a segment of the game that appears after the credits, titled Bad Boy Love, the world of dating pigeons is suddenly revealed to be a dystopia in which humanity and birdmanity have been at war with each other, each trying to infect the other with infectious diseases.

The player learns that the protagonist’s parents, who were attempting to broker peace between the two factions during a hostage negotiation, were shot and killed years earlier. Suddenly, the bodies start stacking up at St. Pigeonation’s, and the protagonist’s past comes hurtling back.

It’s a sudden twist on what’s already a very fun idea. If you want a game that will do more than you’ve expected and surprise you from a narrative perspective, it’s time to accept the invitation from St. Pigeonation’s.