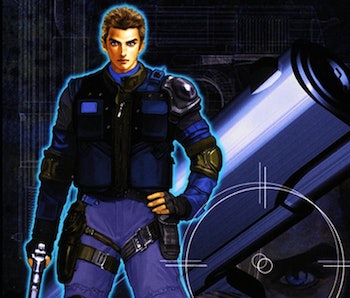 These conventions aren’t really groundbreaking. In fact, they’re the opposite: so obvious that there isn’t much interest in understanding their origins outside of purely historical interest. But they did have to start from somewhere, which is what makes learning about history so fascinating.

The same is true of video games. As a medium, games can be better at remembering their history than others — calling a game a Metroidvania, for example, connects its playing experience to the challenging NES platformers Metroid and Castlevania. But as with movies, books, and TV shows, it can be easy to forget where the obvious thing comes from, just because it's so obvious.

WinBack: Covert Operations is precisely this type of origin point. The 1999 N64 game is the origin point for the concept of “sticky cover” in console games, which is by now more associated with hugely successful franchises. And for anyone interested in understanding an oft-forgotten part of gaming history, it's available right now if you subscribe to Nintendo Switch Online + Expansion Pack.

As a game, WinBack resembles arcade games like 1995’s Time Crisis (which is the origin point for sticky cover overall, but was a rail shooter moving players from location to location). The player is Jean-Luc Cougar, which is just incredible. Jean-Luc Cougar is part of an elite team called the Special Covert Action Team.

The game starts with SCAT flying in a helicopter, getting briefed in a classic video game fashion: “As you all know, the Space Center has been completely destroyed.” Sure, if you say so! This is bad, because as the player learns, it gives terrorists access to the GULF satellite, which can hit any spot on Earth with pinpoint accuracy. One of the team members points out that it's odd the military made something like this, but there’s no time to argue. It’s time to shoot.

This is a silly plot. During a 1999 interview with GameCritics.com, the game’s producer, Tomoike Takazumi, said that he “must admit that a lot of what we did was to make a better game, not specifically to conform to reality.” And this is fine. Not every N64 game had to be Perfect Dark. What Takazumi and the rest of his team really wanted to do was “make a better game.” Frankly, it could have helped WinBack to lean its silliness a little more.

It’s a little hard to judge WinBack’s gameplay on the Switch because the game was very clearly built for its original system. The N64 simply has buttons that a standard Switch controller doesn’t, so an unaltered port like this has to do its best when the game instructs the player to press the Z-trigger or tap the right-hand buttons. Playing through the tutorial definitely helps give new players an understanding of what’s going on, although the camera can be clunky regardless.

But here’s what’s not clunky: press A for cover. When I could get everything working, the cover system paid off. Stand really close to a wall, spin around to shoot, and spin back behind the wall.

It’s a great system, and it’s great if you play it in Uncharted, Watch Dogs 2, Metal Gear Solid V: The Phantom Pain, or any of the other countless shooters that have utilized a cover system.

Like foreshadowing in a book, it gives the player a sneak peek of what’s ahead, allowing tension to build up before any action occurs. Cover systems allow for a break in rapid-fire action, creating a wait-and-see moment for the player as they scan for patterns in opponents ahead. How many of them are there? What weapons do they have? Are they moving in a pattern? These questions are often answered quickly, but there’s often nothing in the rule book which says a player can’t take their time.

WinBack doesn’t use its system to full advantage, as technical innovators rarely do. But it does use it well. When a player is shooting, they can use laser-sight for free aiming, just like in Resident Evil 4.

The N64 created the opportunity for a game like WinBack to operate like it does. As Takazumi says to GameCritics.com, a staffer who had built arcade games came to the team with the “idea of making an action game from the third-person viewpoint that utilized the N64's rather special controller (3D stick, Z-trigger, etc.). That was what started our project. I guess you could say that it wasn't any game that inspired us, it was the controller.”

Interestingly enough, Takazumi doesn’t mention the game’s cover system once, nor is he asked about it. Rather, he focuses on the game’s use of the Z-trigger for squatting. It’s a fascinating moment: this game’s one claim to history is ignored at the time, instead focusing on how it uses a button for a controller no longer in use. It’s hard to realize what’s history and what isn’t in the moment.

There are several aspects of WinBack that could be improved, and later games did just that. Still, it’s fun to see where it all started.