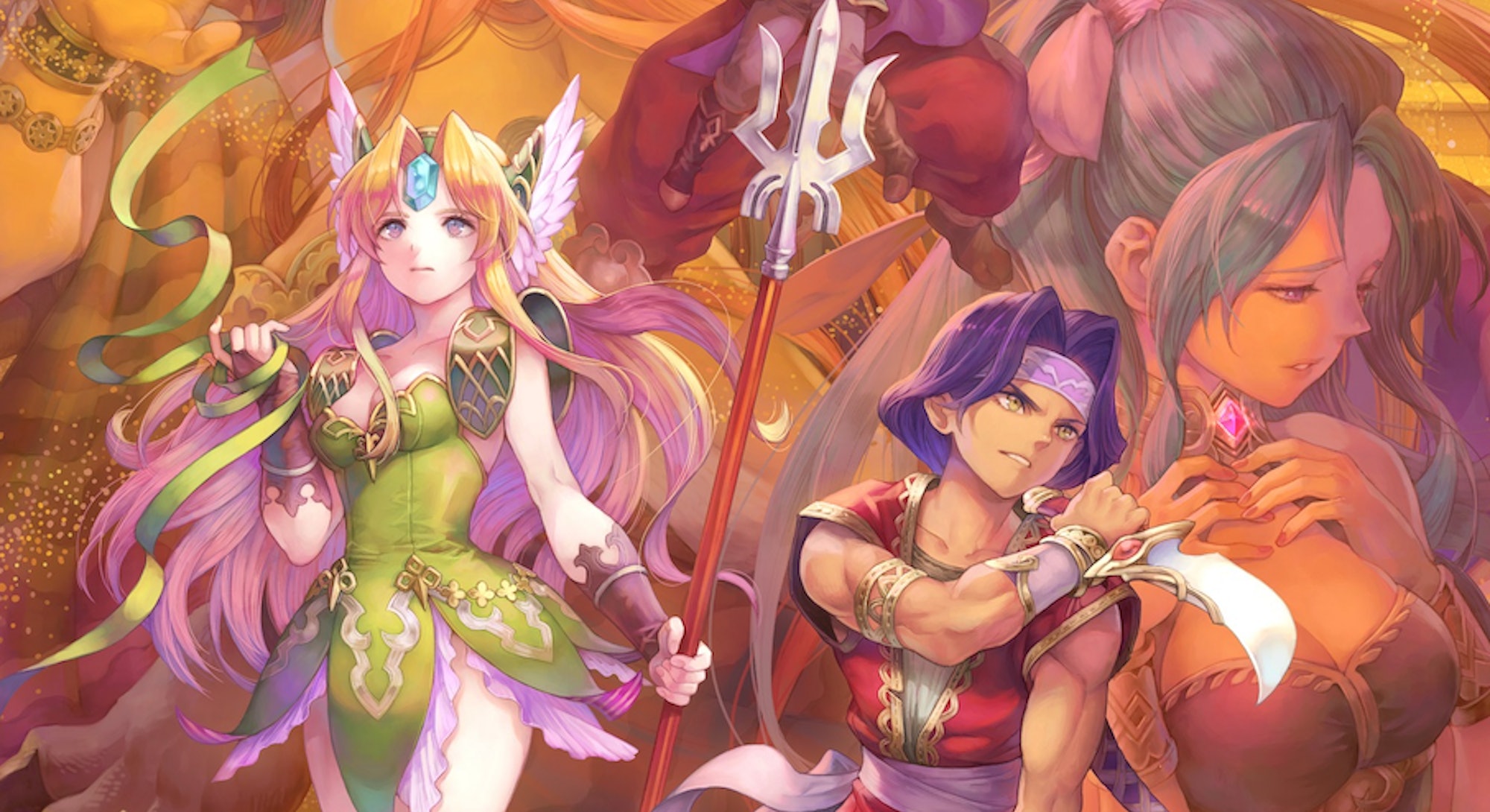 Final Fantasy VII Remake is a tough act to follow.

The sequel to Square Enix's iconic SNES game Secret of Mana, Trials of Mana is a top-down remake of a 1995 role-playing game that never made it overseas. For more than two decades, Trials of Mana (known as Seiken Densetsu 3 in Japan) had been a white whale among Western fans of the RPG genre. I've been wanting to play the older version for a while, but decided to hold out for the current-gen remake.

I'm not convinced it was worth the wait. The PS4 version of Trials of Mana remake is a mixed bag, and I suspect it might still best be enjoyed as a 16-bit experience. (You can play the SNES version as part of the old-school Collection of Mana released last year.) While Trials of Mana's nimble, action-focused combat system and class system haven't aged a day, its hokey storytelling and cookie-cutter dungeons feel like the product of a bygone era. If you like RPGs without too much chit-chat, Trials of Mana will scratch the itch for a grindy dungeon crawler. But its appeal is more niche than broad, making it one for genre diehards only.

Good news first: Trials of Mana's combat system is a snappy, strategic delight. Your basic melee attacks are handled in button-mashing fashion, a standard attack and a chargeable strong attack that you'll need to bust through shielded foes. Landing blows will steadily fill up your Class Strike meter. Once it's charged, you unleash a special move to deal whopping damage to either single or multiple targets. FIghts are integrated seamlessly into exploration with no transitions or loading screens, and you can freely toggle between party members. Speedy battles will keep you on your toes strategy-wise, but mercifully there's no noticeable lag or wonky camera issues. Boss battles are plentiful and challenging, but exhilarating once you hone in on a workable strategy.

While combat is fast and furious, other sections of the game are dragged down by load times on PS4, averaging around 30 seconds – and sometimes even longer – if you're traveling by ship or entering a new dungeon area. It's not the end of the world, but it can get tedious.

Trials of Mana's environments are vibrant and cheerful, but dungeons lack engaging puzzle elements and seem to rely on a whole lot of pallete swaps. This wasn't noticeable in my two-hour demo a few weeks back, but it became irksome the deeper I got into the game. You'll visit a lot of almost identical caves and fields, and many of the towns in the first half of the 20+ hour runtime are dotted with the same cookie-cutter houses, taverns, shops, and NPCs. Some more distinctive locations pop up once you've got access to transportation by sea and air, but it would have been nice to see more visual variety earlier on.

Couch co-op was one of the most memorable aspects of Trials of Mana's predecessor, and I fondly recall being dragged through Secret of Mana's dungeons by my older brother as a kiddo. The remake of Trials omits the option to play with a friend, and it's a real shame given the timing of the release. (You can still play co-op on the Collection of Mana version.) Playing with another housebound buddy could have made the experience a bit more distinctive and memorable.

Trials of Mana has six playable characters to choose from, and they're mostly time-tested RPG tropes: the spiky-haired swordsman, the quippy thief, the yappy kid, the bosomy mage. You can pick any trio, and while it won't change the story substantially (your main character gets their own brief introductory chapter and endgame scenario), it will have a big impact on the cadence of fighting. This bodes very well for replay value, but there's one big caveat: some trios are better than others. Select three fighters – as I did – and your ability to use magic will be hampered for a substantial chunk of the game. Go all-in on magic users, and you'll be scrambling to heal your delicate heroes all the time.

An enjoyable character customization system largely addresses these grumbles, though you have to get several hours in to take advantage of it. Each character has six possible upgrades from their starting class, divvied up by light and dark. You can change class twice, at level 18 and 38, which allows you to gain access to a host of new abilities. The system opens up loads of variety in terms of combat strategy, so if you're someone who savors boss fights but isn't so big on cutscenes, Trials might be right up your alley.

Several 1990s Square Enix (then Squaresoft) RPGs have enduring stories that adeptly manage sprawling casts – Final Fantasy VI and Chrono Trigger come immediately to mind. Then there's Trials of Mana, which is very much a "save the world by clearing these eight dungeons" kind of narrative. While it sets higher ambitions for its characters than Secret of Mana, those ambitions don't pay off in a particularly satisfying way. I consistently struggled to care about anyone's backstory and routinely skipped through cinematics, which is pretty unusual for me. It isn't exactly a mortal sin, but the clunky dialogue was all the more obvious having just finished Final Fantasy VII Remake, which manages to make you care deeply about characters who were all but cannon fodder in the original game.

Here's an example of what I mean: I chose Reisz, the spear-wielding blondie, as my main character. Her intro centers on an invasion that leaves her father dead and brother kidnapped. She searches the castle for her kid brother, finds him surrounded by knife-wielding assassins, then literally abandons him there to check on her dad instead. This is played entirely straight-faced for the rest of the game as The Formative Tragedy in her heroic journey against nefarious evildoers, but it's entirely her fault for being thick as a damn brick. Would this have made any sense in the 16-bit version of Trials of Mana? Probably not, but it sticks out all the more as a brightly rendered animated cutscene. The script and character development didn't get as much of an update as the visuals in this remake, and it's obvious more often than it should be.

The release of Final Fantasy VII Remake just two weeks before didn't do this game any favors, but Trials of Mana's shortcomings are its own. With a slightly more fleshed-out story and characters, I might be tempted by the prospect of a second playthrough, because some of those boss fights are pretty darn fun. As it is though, this one falls a bit short of what I hoped for in a modern take on Mana. 6/10.

Trials of Mana comes to PC, PS4 and Switch April 24.

INVERSE VIDEO GAME REVIEW ETHOS: When it comes to video games, Inverse values a few qualities that other sites may not. For instance, we care about hours over money. Many new AAA games have similar costs, which is why we value the experience of playing more than price comparisons. We don’t value grinding and fetch quests as much as games that make the most out of every level. ¶ ️We also care about the in-game narrative more than most. If the world of a video game is rich enough to foster sociological theories about its government and character backstories, it’s a game we won’t be able to stop thinking about, no matter its price or popularity. ¶ We won’t punch down. We won’t evaluate an indie game in the same way we will evaluate a AAA game that’s produced by a team of thousands. ¶ We review games based on what’s available in our consoles at the time. For instance, we won’t hold it against a video game if its online mode isn’t perfect at launch. ¶ And finally, we have very little tolerance for junk science. (Magic is always OK.) ¶ Here’s how we would have reviewed some classic games: 10 = GoldenEye 007. 9 = Red Dead Redemption 2. 8 = Celeste. 7 = Mass Effect 3. 6 = No Man’s Sky. 5 = Fortnite. 4 = Anthem. 3 = Star Wars Battlefront II. 2 = Assassin’s Creed Unity. 1 = E.T. the Extra-Terrestrial.