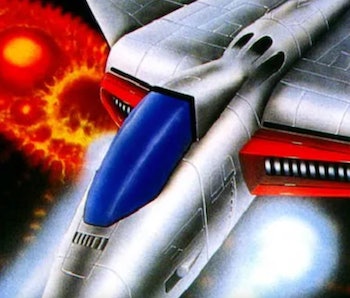 Imagine an open-world game that just throws the player, without any training, into a harsh and uncaring world. Without much understanding of what they’re supposed to be doing or how they’re supposed to do it, the player dies quickly and often. But the gameplay itself is fun and engaging, scattered between all the dying. Eventually, the player starts to master the system of gameplay, even gaining powers that radically re-orient the game in their favor.

There’s still a lot of dying, and not very much understanding of what’s happening, but the player is now able to understand the game. And with that understanding, the game becomes a blast.

Several games could be described like this, including those made by Elden Ring developer FromSoftware. But in this case, I’m describing my experience playing the 1989 Sega Genesis Thunder Force II on the Nintendo Switch. It’s a fun, challenging adventure available right now if you’ve subscribed to Nintendo Switch Online + Expansion Pack.

At its core, Thunder Force II is a scrolling shooter. At times it is a side-scroller, others it resembles an open world. As played on the Switch, you’re given a good-luck cheer, and then off you go, flying around and shooting everything in sight (that’s also trying to shoot you back).

The enemy ships stalk you throughout, sometimes tailing you close enough to read your bumper stickers. Others resemble kabuki masks and disassemble themselves, breaking into four tiny ships that swirl around trying to hit your verssel. And their red orbs follow you for quite some time, making dodging them an increasingly complicated endavor. And then on top of that, whenever I crossed certain white borders, I ended up dying. The three lives weren’t enough.

Stymied in my early efforts, I turned to a helpful walkthrough published in 2015. While it wasn’t exactly hard for me to figure out how to fly around or switch between guns on my own, the game offered no objective beyond destruction. Clearly, all of this was explained in a manual somewhere.

The story of Thunder Force II is straight out of the arcade era, with the evil ORN Empire attacking the Galactic Federation. Piloting the experimental space fighter Exceliza, the player must liberate the planet Nepura from the ORN. In other terms, a lot of sci-fi words thrown together. But a game like Thunder Force II isn’t based around a coherent plot- it’s based around destroying everything.

And in this, Thunder Force II is great. Grabbing power-ups that pop up on the top of the screen like tabs in a browser help a lot. Moving from Exceliza’s two types of attacks to powered-up ones feels like a relief, especially the powerful laser and the time-saving hunter.

Thunder Force II feels like an arcade game to the extent that you can practically feel the quarters being sucked out of your jacket pocket. But while Nintendo’s approach to retro games on the Switch has several downsides, being able to rewind is a huge plus for beginners. Reaching a skill level where you’re able to turn around on a myriad of enemies and turn the firepower back on them is a true joy of gaming.