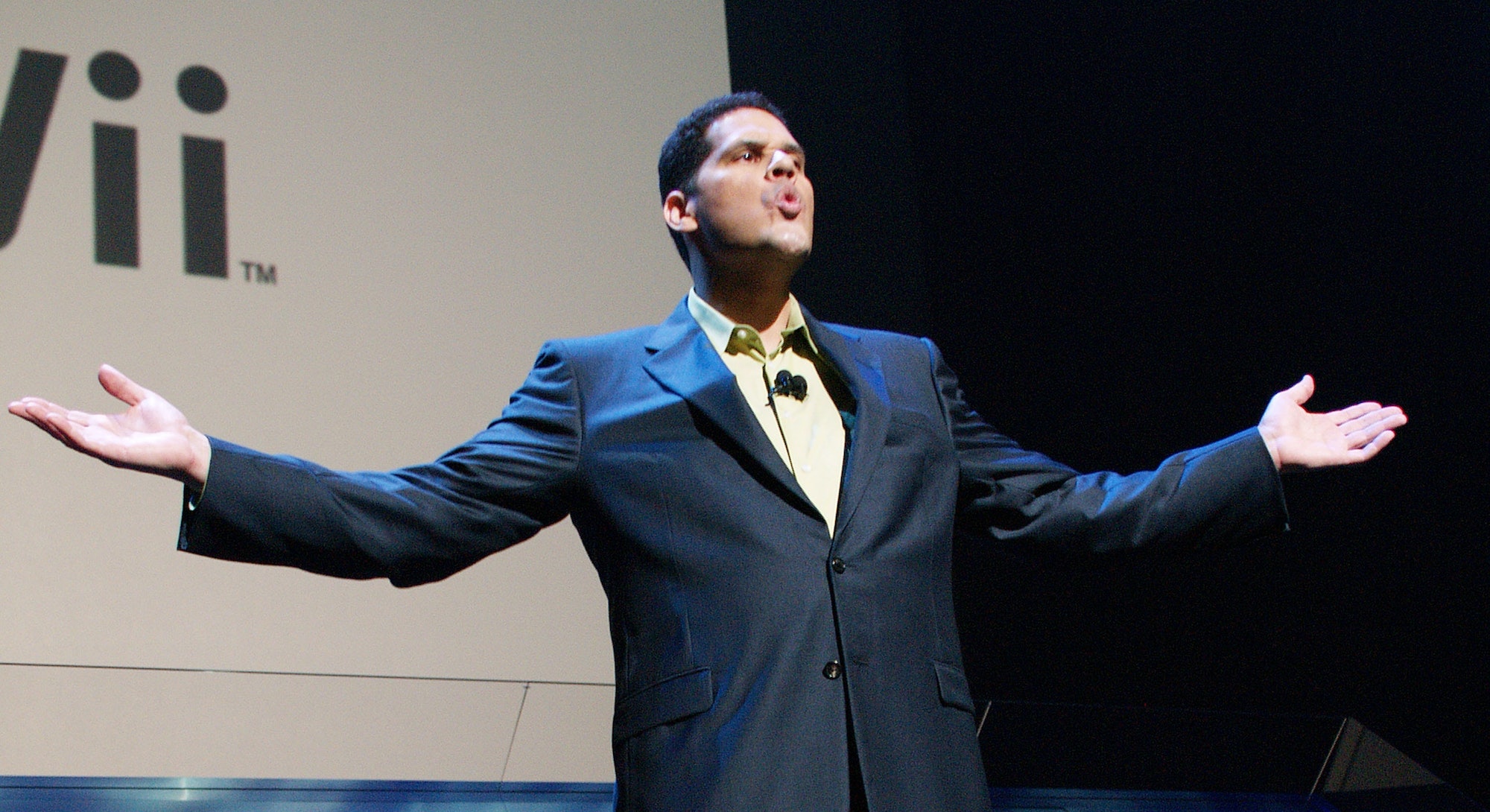 My name is Reggie. I’m about kicking ass. I’m about taking names. And we’re about making games.

This was the world’s introduction to Reggie Fils-Aimé, the newly appointed head of sales and marketing for Nintendo of America. A veritable giant at 6-foot-2, he strode confidently onto the stage at Nintendo’s Electronic Entertainment Expo (E3) presentation as a soaring orchestral score gave way to what passed for sick electronic beats in 2004. At the time, Nintendo’s top brass were deeply concerned the company was lagging behind “hardcore” competitors like PlayStation and Xbox.

Reggie, as fans soon came to call him, became the figurehead of a bold new era for a company that once notoriously replaced blood with blue mouthwash in the SNES version of Mortal Kombat.

It would become one of the most iconic moments in modern gaming history.

While the “kicking ass, taking names” line seemed like a spontaneous ten seconds of Nintendo’s hour-long conference, Reggie and his team spent months working on a presentation that was scrutinized by company leadership, as he details in his new book Disrupting the Game. Linguistic and cultural barriers required Fils-Aimé to explain his intentions to beloved company head Satoru Iwata on numerous occasions.

“We need to be clear that we are focused on driving the industry,” he writes of his attempts to persuade Iwata. “We are going to be aggressive. We will drive innovation. We will look to be successful across the world. This line is the opening phase of our new direction.”

“It was remarkable to me how often the slate of final candidates looked exactly like the hiring manager.”

That triumphant moment marked the start of an incredible 15-year run at Nintendo, but it was also marred by an unnerving reminder of the industry’s more insidious biases. Immediately before taking the stage, Reggie was mistaken for a security guard. He looks back on the incident as a symptom of a bigger social problem that still needs to be addressed both within and beyond the games industry.

“This is a big issue, not only in the gaming business — it's a significant issue around all industries,” Reggie tells Inverse. “It becomes the responsibility of each company to demand a diverse slate, to really challenge themselves to create as diverse an organization as possible. When I was president at Nintendo of America, it was remarkable to me how often the slate of final candidates looked exactly like the hiring manager, whether it was from a sexual orientation standpoint, a gender standpoint, whether it was the color of skin.”

Reggie acknowledges that creating inclusive workplace environments is hard work and says one of his biggest concerns is that industry leaders won’t take these initiatives seriously.

“I was the one to push back as a challenge and say, ‘No, this slate isn't good enough.’ I fear that that's not happening broadly within our gaming industry,” Fils-Aimé says. “I'm still close with Phil Spencer over at Microsoft. This is something I know that is important to him, but I don't believe it is something that is being addressed with passion and vigor across the entire industry.”

Disrupting the Game doesn’t focus exclusively on his days at Nintendo — it also details the long and winding professional road that led him there. His first job right out of college was with Procter and Gamble, the parent company of consumer brands like Crest and Gillette. Toward the end of his tenure there, he approved an ambitious advertising package despite lacking the authority to do so. It taught him a harsh — but important — lesson.

“I was so confident in my vision, I started spending without the full agreement of my management. In the end, that cost me my career at P&G,” Fils-Aimé says.

That experience proved invaluable when he eventually came to Nintendo, a deeply traditional Japanese company where adherence to protocol often outweighs the value of haste. In the lead-up to the Wii launch in November 2006, Reggie had a bold idea — include Wii Sports as a free game with every console sold. Initially, this offended Mario and Zelda creator Shigeru Miyamoto, but after months of careful discussion, Fils-Aimé eventually got the green light.

While Disrupting the Game offers a fascinating peek behind the curtain of Fils-Aimé’s career, the format was a massive departure from his original idea.

“The first book was focusing on all of the real-world skills that you learn and develop by playing video games — strategic thinking, communication skills,” Reggie says. “As I shared this idea with folks, I received the feedback that it was a nice speech, but really wasn’t a book, which then drove me to focus more on a business memoir.”

Fils-Aimé took inspiration from The Ride of a Lifetime, the memoir of former Disney CEO, Bob Iger, as well as others. He says he found the format of those books to be slightly user-unfriendly.

“They were two books, loosely stitched together,” Reggie says. “The first part of the book would be the memoir, the second half would be lessons learned or key principles. I thought for the reader that it was a bit disruptive. That gave birth to my approach.”

“I absolutely believe that Gamestop can successfully pivot and be a vibrant part of the gaming industry.”

Fils-Aimé retired from Nintendo in 2019, though he still serves in an advisory role and on the board of numerous institutions and companies. One of these was gaming retailer Gamestop, though he says the addition of new board members and their plans for the future were “warning bells” for him to step away after just one year.

“I absolutely believe that Gamestop can successfully pivot and be a vibrant part of the gaming industry,” Reggie says. “Its secret formula is their employees who are passionate ambassadors for the video game space.”

He continues, “But they've got to figure out how to participate in the digital sale of software. I brought a lot of those ideas to the board, and a number of them were being actively discussed. Now I'm sitting back and watching to see how they address that issue.”

One of Reggie’s more surprising admissions in Disrupting the Game is that he didn’t own a GameCube at the time he interviewed at Nintendo — though he did own both a PlayStation 2 and an Xbox. He says the wrong has since been righted.

“I do have a GameCube,” Reggie says. “I ended up having three. Fans don’t need to worry.”

Disrupting the Game is available in stores and online now.