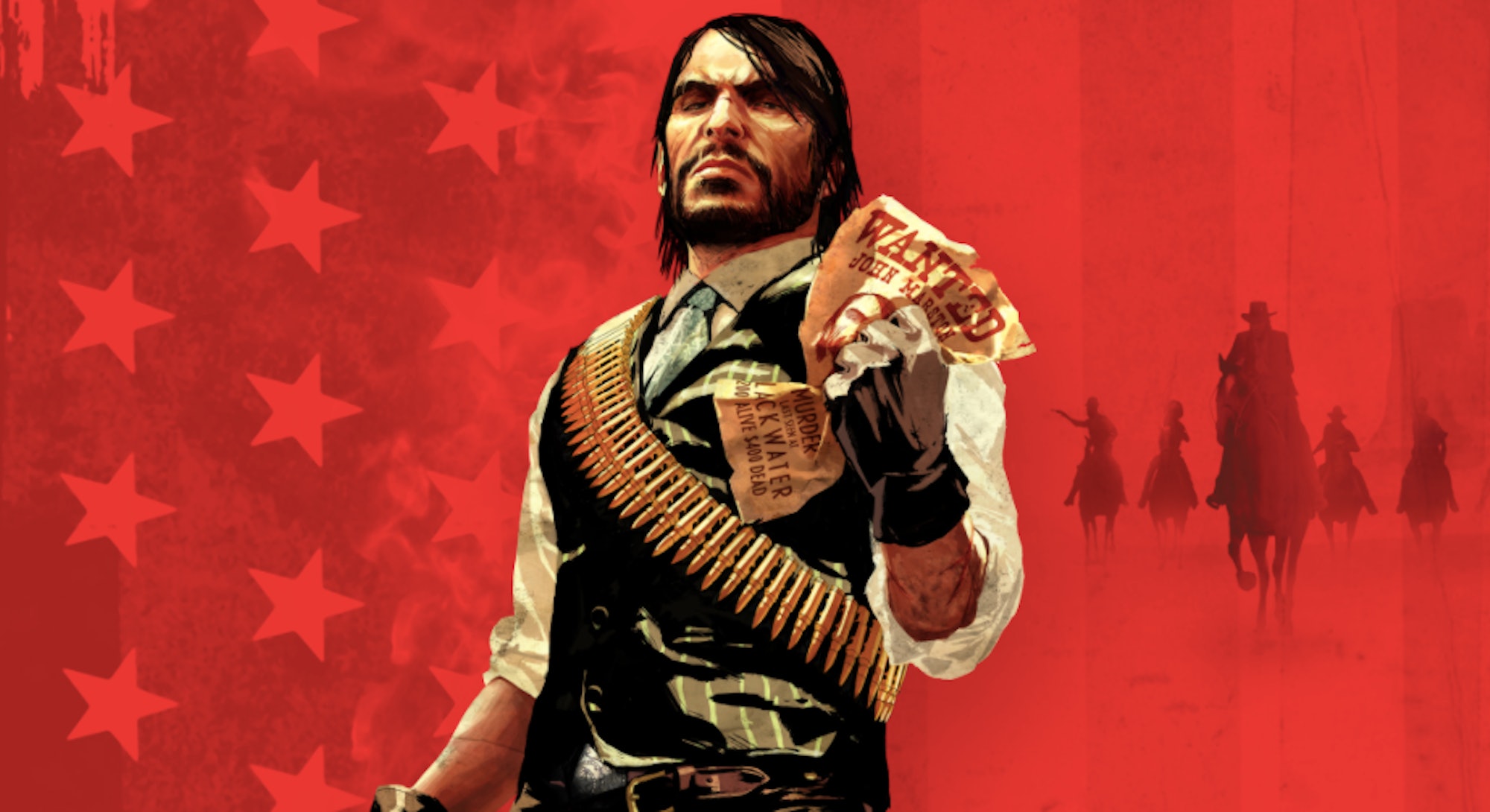 Things that suck in real life can be far more enjoyable in video games.

Being judged by your peers is one of the delights of Rockstar’s Red Dead Redemption, which celebrates its 10th anniversary this week. The game's blockbuster sequel, 2018’s Red Dead Redemption 2, made that mechanic even richer by allowing players to experience — and live with the consequences of — truly unique gameplay scenarios with thought-provoking moral consequences.

The 2010 open-world Western plonks players into the boots of John Marston, a former bandit whose husband and son are taken captive by the government in 1911, forcing him to bring three bad dudes from his old Van der Linde gang to justice. The ambitious adventure was widely praised by critics and went on to sell a whopping 15 million copies by 2017. Along the way, you’ll have countless opportunities to shape how others see John as a hero, a villain, or somewhere in between.

One way or the other: Red Dead’s John Marston

As John, you can choose to help the vulnerable and poor, or be a ruthless cur. Almost every action you take is assigned a distinct point value in Red Dead Redemption’s honor system. There are clear perks to being a good guy by helping strangers and aiding the law – you’ll get discounts in shops and passerby will be nicer to you. Actions have a corresponding positive and negative honor value: disarming John’s opponent in a duel, rather than killing him, earns a cool 200 points. On the other hand, you’ll be punished for committing dirty deeds: minus 100 points for killing a lawman or a nun.

Curiously, bribing a lawman while you’re wanted is the worst sin of all, knocking 400 to 1,000 points off your honor tally. Is that really so much worse than killing a nun?

According to a January 2010 post on Rockstar’s Newswire blog, this gameplay mechanic was partially influenced by “actual legendary heroes and villains from the Old West who responded to the new period of progress and potential prosperity by changing their ways, for better or worse. Bad guys turned tame, good guys gone bad, and a few managed to exploit their own legends for fame and profit.”

As you progress in the game, your honor score will also influence John’s personality. Play with virtue, and you’ll be doffing your hat to ladies and gents all over town. Embrace the dark side, and his dialogue — generated randomly through pressing one of four directions on the D-Pad — will have a more antagonistic and lecherous bent. (One such gem: “You like younger men, darlin’? I’m at my sexual peak, sweetheart!” to a saloon girl.) There’s one caveat, though: donning a bandana will allow John to evade a multitude of sins, which isn’t all that true to real life.

John's dialogue options in the original 'Red Dead Redemption' can shift dramatically depending on his current honor stat.

2018’s Red Dead Redemption 2, a prequel to John’s story set in the waning heyday of the Van der Linde gang in 1899, elaborates on the honor mechanic in a way that’s even more memorable. You play as the older, wiser Arthur Morgan, a gruff and grizzled counterpoint to the then twenty-something John.

Red Dead 2’s honor system does away with the omnipotent bandana of the original game, which means your honor can be affected even in scenarios where nobody’s watching. The sequel also eliminates the point system, which lends more ambiguity to Arthur’s behavior. His honor rating will slightly tweak the music and cutscenes you see, all the way up to the ending. Red Dead 2’s sights and sounds take on a more sinister air when Arthur’s honor is low, and a more optimistic slant when it’s high.

A direct comparison of differences between the same 'Red Dead 2' scene with a high honor and low honor Arthur.

These honor-driven tweaks aren’t always obvious, but when they catch you off guard, the effect can be arresting. With food supplies low at camp, I decided to pick off a few cows at a far-flung homestead under cover of night. Turns out, killing domesticated animals is frowned upon by the gods of Red Dead Redemption, and the low violin music and bovine screeching that greeted Arthur’s moonlight slaughter was as compelling an argument for vegetarianism as I’ve ever heard.

While the original Red Dead Redemption was no slouch in the sales department, the sequel was an absolute barnstormer by every possible standard, drawing stellar reviews and earning $725 million in just three days, making it the biggest opening weekend for any piece of entertainment ever. (That record was overtaken by Marvel’s Avengers: Endgame in 2019.) Red Dead 2 has since gone on to sell more than 29 million copies as of February 2020.

One of the reasons behind Red Dead 2’s critical acclaim and enduring appeal to audiences is its intricate open world. In towns and at the Van der Linde gang’s camp, every non-playable character has a routine that can be shaped by Arthur, subtly or dramatically. The majority of these interactions affect Arthur’s honor. There's also more freedom with dialogue choices than in the original Red Dead, and Arthur can choose to antagonize or greet his fellow gang members and town dwellers. These little interactions add up over time, and if you’re like me, you’ll find it hard to get anywhere in San Denis because you’re too busy saying hello to everyone for the sake of good karma.

The burden of dishonor

Red Dead 2 has few qualms about punishing a butterfingered player. Accidentally whip out your pistol in the general store when you meant to innocently greet a stranger, and suddenly Arthur’s got the law on his tail. Even if you pay off your bounty or surrender, the locals will remember what you did. They’ll chastise Arthur the next time he passes through town, even as he attempts to play things off with a cordial ‘hey mister.”

Just a few hours in, most of the game’s sprawling four-state map is wide open, allowing you to progress the main story as leisurely as you like. This opens up a host of fascinating possibilities for the honor system. As you explore the countryside, you’ll encounter random strangers asking for aid, and Red Dead 2 keeps the best course of action refreshingly unclear. Will these folks rob you, or do they genuinely need your help? Do those creepy siblings at the pig farm want more than a friendly meal and some bedroom hijinks? You can always save your game and then reload if you get a lousy outcome, but in my experience, it’s far more rewarding to let it ride.

My favorite example of this: a drunk in the Valentine saloon picked a fight as I was fixin’ to explore some new mustache options at the barber. He had a pretty badass raccoon cap that I wanted to snag. I’m not very good at hunting, and there was no way I was getting the required number of perfect pelts the old-fashioned way. We came to blows and I won. Or so I thought.

When attempting to claim my spiffy new headgear, I accidentally picked up my unconscious adversary and put him down again. This flub caught the eye of tattletale bystanders, who instantly reported me to the sheriff on assault charges. (Defending myself in a fistfight was fine – picking someone up and putting them down again was the real crime.) I hightailed it out of Valentine toward the Dakota River, with several lawmen following behind. Things took a turn for the catastrophic when I got my horse killed and tried to fire some warning shots… and then, well, I kinda ended up killing six lawmen in the heat of the moment. This moment of hot-headed panic sent my carefully cultivated honor into the toilet and racked up hundreds of dollars in bounty. It took me hours to pay off.

Critics have pointed out that Red Dead 2’s honor system holds players to a far different standard in story battles than for optional content. You can mow down a couple dozen O’Driscolls and pick their corpses clean with no harm to Arthur’s honor, so long as you’ve got Dutch and Hosea in tow. I noticed this as well, but don’t find it particularly bothersome. If those same rules applied to the main story shootouts, there’d be no point to the honor system, since Arthur would always remain in the doghouse. Those weird consequence cascades of the wanted and honor mechanics might not be especially accurate, or even fair, but they’re one of the most memorable and fascinating aspects of the game.

This added layer of moral complexity and ambiguity is what makes the optional content of Red Dead 2 so feel anything but – you’re constantly stumbling upon new opportunities for vice and virtue.