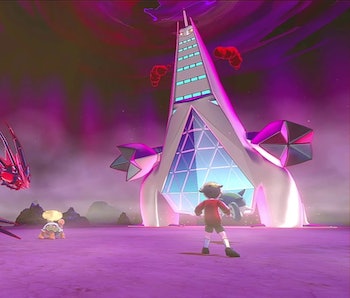 Fans learned more about the Isle of Armor expansion for Pokémon Sword and Shield during the March 26 Nintendo Direct Mini, and there are some more immediate changes happening to the popular pair of Pokémon games as well. No matter which version you have, two Pokemon have just become much easier to find, due to their inclusion in April's Max Raid battle event.

Which Pokémon can be fought in April's Max Raids?

You'll be able to find Gigatamax Raids with Charizard, Garborder, Copperajah, and Duraludon over the course of the next month.

Charizard is the classic final form of Kanto starter Charmander, who's a Fire and Flying-type. Be sure to watch out for G-Max Wildfire, which is a powerful attack that also burns Pokémon for four turns.

Meanwhile, Garbodor is a Poison-type Pokemon made of literal garbage that was introduced in Pokémon Black and White. It can use G-Max Malodor, which will poison whatever Pokémon you are using to fight it

If you are playing Pokémon Shield, you'll find the Gigantamax forms of Darludon and Copperajah during raids. Copperajah is a Steel-type Pokémon that can use Steelsurge to place damaging spikes on the field, and Duraludon is a Steel and Dragon-type that is more likely to use G-Max Depletion the will take additional PP away from the moves that you are using.

Both Copperajah and Duraludon are new Pokémon introduced in Sword and Shield. By defeating them, players can get tons of valuable items and ones to use in battles like PP Maxes and Ability Capsules.

All four Pokémon are available at the same time during this event. The new Gigantamax raids run from March 26 until April 27.

How to find Charizard, Garbodor, Duraludon, and Copperajah

Finding these Gigantamax forms should be fairly easy. Once you having activated the Wild News with an online connection, these four Pokémon will begin to fill the Pokémon Dens spewing purple or red lights. Approach one of these dens and you'll be able to see the silhouette of the Pokemon contained within. All four Pokémon have very distinct sprites, so distinguishing between them shouldn't be too difficult.

The spawns of these Max Raids are technically random, but you should be able to find at least one of them fairly quickly. Once you find the Pokémon that you want to catch, choose to go in with AI or a group of friends and have fun fighting them!

Max Raids like this can be quite tough, but each of these four Pokémon has blatant weaknesses that you can exploit.

If fighting Charizard, use Rock-type Pokemon or moves to have 4x super effectiveness.

For Garbodor, the fairly common Psychic and Ground types are both super effective against it.

Copperajah is a pure Steel type, so it also has fairly obvious weaknesses to fire and ground.

Gigantamax Duraludon may be the most difficult to beat, thanks to its tricky Steel and Dragon typing and PP-depleting moves. It doesn't have any 4x weaknesses but is still weak to Fighting or Ground types.

With the exception of Charizard, who is immune, using a Ground-type Pokémon is the best thing to do if you want to beat these Max Raids.

Pokémon Sword and Shield are available now for Nintendo Switch.