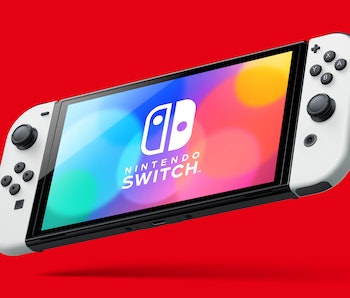 This week, Nintendo announced the latest addition to its lineup of handheld Switch gaming devices. The new device has a handful of interesting new features that offer more than meets the eye, and chief among them is the OLED screen. The technology, first developed in 1987, has been arriving on TVs for more than a decade. OLED is known for dark blacks (it doesn’t need a backlight), high contrast brights, and not sucking your battery life.

So, why has the reaction been mixed to this OLED Switch? It’s not the upgraded “Switch Pro” many were hoping for: The processing power is the same; this water-treading is blamed on a semiconductor shortage spawned by Covid-19-related production slowdowns over the last 18 months.

As opposed to an LED screen, OLED (short for organic light-emitting diode) offers a better picture, but to understand why this technology isn’t enough to please gamers, we asked Raymond Wong, senior reviews editor, for Input.

Inverse: Did you see the news this week? Well, what did you make of it?

Ray Wong of Input: I think it was just a little underwhelming, a little disappointing. There was a lot of hype for a Switch Pro; there were rumors about the potential OLED display. I think many people were looking forward to maybe a larger display or even a higher-resolution display. So they stuck with 720p instead of bumping it up to 1080p, and you can't even output to 4K. I don't think anyone ever expected a 4k display on the device itself, but at least outputting to 4k would have been nicer.

This OLED display, honestly, I don't think it's going to make a very big difference. Most of our phones have OLED displays — your iPhones or Androids or Pixels, your Samsung Galaxy, whatever. And they've had OLED displays for a long time. The PS Vita had an OLED display like ten years ago. So it's not like it's groundbreaking, revolutionary new tech.

OLED does deliver a better picture quality, but I don't think that's going to truly improve your quality of life when you're playing the Switch.

I don't think I've ever looked at the PS Vita or my iPhone or an iPad and said, “Oh, man, I wish the black levels were darker.”

Inverse: So we shouldn't be fooled by the OLED option for Switch? You can notice the difference on a large screen but with a Nintendo or handheld device, something that's much smaller, do you think the difference is negligible?

Wong: I think it's very negligible, especially on a 720p display that isn't as pixel-dense as the screen on iPhones with the Retina display. You’ve got some true clarity with Retina Display. But on a Switch — like I've looked at my Switch — and I play handheld mode a lot. And I've never once said, “Hey, look, I wish this the colors were better. You know, I wish it was a higher resolution.”

Inverse: How does OLED affect battery life in a Switch? Will you get a few extra minutes of game time?

Wong: I don't think so. You know, OLED used to be a thing that helped conserve battery life when you were on a web page or standby mode on your phone. So like, if your phone's idle, and it's just a black screen, all the pixels would be turned off. And you wouldn't be wasting any power at all. So like, if you've got dark mode as I do right now on my iPhone, it's a black wallpaper. Those black pixels are conserving power. But on a Switch, the user interface is pretty bright. It's not going to benefit much or at all from OLED. And most games are probably not going to take advantage of the power efficiencies of OLED.

They're not very dark, especially Nintendo games. A lot of the games on the Switch tend to be overly bright. You'll get some additional vibrancy, but I don't think it's going to be something noticeable. You definitely won't be like, “Oh, yeah, I'm saving a couple of hours of battery life.” Maybe you'll get like a couple of minutes here and there while it's idle. I can't see this being a significant power-save.

Honestly, I think that this is the wrong move. Nintendo is pushing in a piece of tech that isn't adding any actual value. And I believe there are specific reasons for why they're doing that. Maybe they were planning a Switch Pro with perhaps a higher resolution, an OLED screen, and a more powerful chip.

I think the kind of component shortage and chip shortage worldwide kind of forced them to scale back some of those features, maybe. And that's why we get an OLED display.