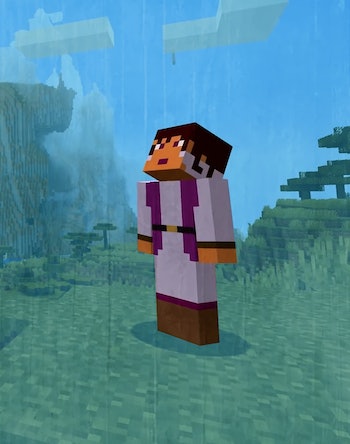 The metaverse is far older than Facebook’s recent bid to make baby boomers fall in love with VR.

Cruising through its eleventh year, Minecraft is more popular than ever, with an active player count of nearly 172 million in August 2022 alone. But there’s more to the game than building castles and slashing Creepers.

September saw the full release of Minecraft Education Edition, which has been available in beta since 2016. Over that six-year period, the game has become a powerful platform for interdisciplinary learning on a broad range of topics, from climate change, to literature, to indigenous cultures. It shares all the same features and functionality of “bedrock” Minecraft, with more stringent privacy and safety tools — and a library chock-full of educational resources and experiences.

For Head of Minecraft Education Allison Matthews, the potential of a metaverse doesn’t lie in branding opportunities or flogging NFTs. It’s about making the world a better place. And that starts with education that cultivates empathy.

“From our perspective, a Minecraft server or multiplayer world is a metaverse. If and when the metaverse expands more broadly, we would want to make sure that the values that we have within Minecraft apply more broadly to metaverses everywhere,” Matthews tells Inverse.

“We would want everyone to have equal opportunities in these virtual worlds. We wouldn't want there to be forced scarcity, or spaces that only certain people can have access to,” she continues. “We would want inclusive access, diversity, and the ability for anybody to safely join a virtual space and have fun together and create the adventures that they want to have.”

Minecraft Education is putting that philosophy into action by creating virtual worlds like Peace Builders, a partnership with the Nobel Peace Center and Games for Change, and Frozen Planet II, a collaboration with BBC Earth. In these worlds, students of all ages can learn about topics like conflict mitigation and climate change in a collaborative, immersive environment.

The move to use Minecraft as a teaching tool didn’t start with developer Mojang. It began with a group of educators in New Jersey who were using the game in their classrooms. The makers of the game took note, working with them in-house and building upon the seed of the idea. Now Minecraft Education has a dedicated learning experiences team, all of whom are former educators. It’s through that team that partnerships with organizations like the Nobel Peace Center and BBC Earth take shape.

“We would want everyone to have equal opportunities in these virtual worlds.”

In the early days, persuading teachers to incorporate Minecraft into their lesson plans wasn’t easy.

“Our biggest hurdle from the beginning was convincing educators and school leaders that it was a good idea to bring the world's most popular video game into their classrooms,” says Matthews. “But I have been in forums where ministers of education or ministers of culture have been on stage talking about the power of Minecraft Education to reach students who perhaps weren't being successful in a normal classroom environment, or in more deeply or immersively addressing issues that they didn't otherwise have a tool to address.”

As online spaces become more entangled with real life, Minecraft has become a tool for educators to start discussions about digital citizenship.

“It's an opportunity for an educator to have a conversation with students about kindness and empathy — understanding that the things that you say to someone, even if you're in a virtual world, can have real impacts on the person. It opens up positive conversations in a way that we wouldn't be able to address otherwise,” says Matthews.

The virtual worlds of Minecraft Education also allow teachers to engage with students about more challenging topics in a comparatively safe space.

“So when we look out at different conditions in the world today — whether it be the climate crisis, or the war in Ukraine, or political upheaval. Young people and educators don't necessarily have tools that help them deal with these kinds of scary existential topics, because they aren't necessarily part of the core curriculum,” says Matthews.

“We saw a need in schools to address these topics, but we also know that what we're good at is building games. We are not experts in these other areas, even if we're passionate about them,” she adds. “So we needed to partner up with organizations that have the experience, credibility, and curriculum content that we could bring into the game to make it a powerful learning experience.”

For Matthews and her team, the partnership with the Nobel Peace Center was an opportunity to inspire young people about small changes they could make within their own communities to help create a more peaceful world. Peace Builders, the recently launched second project from this collaboration, includes interactive experiences with four Nobel Laureates — Jody Williams, Archbishop Desmond Tutu, Carl von Ossietzky, and the United Nations Refugee Agency.

To create these experiences, the Minecraft team works closely with the laureates themselves, or their foundations. Williams, who was awarded the Nobel Peace Prize in 1997 for her work with the International Campaign Against Landmines, even came to the team’s offices for a candid conversation about the importance of taking action.

When you’re trying to develop a learning experience that’s going to have a lasting impact, authenticity is crucial. Minecraft Education walks a careful line, calling attention to injustice and conflict in an age-appropriate way.

“It's an opportunity for an educator to have a conversation with students about kindness and empathy.”

“We wanted to make sure that we were showing young people that it doesn't matter where you're from, what your background is, what your gender is —you can have an impact on the world if there's something that you're passionate about and you take action,” says Matthews.

As “bedrock” Minecraft cruises into its second decade of formidable popularity, the future seems limitless for the game’s potential in the classroom. Peace Builders and Frozen Planet II have already busted out of the schools-only silo, and are accessible in the main game for all players. It’s a trend Matthews hopes to see continue in the future.

“The goal is to make our content much more broadly available to everyone,” she says.

The team also has further collaborations with the Nobel Foundation in store, expanding the project to other prizes within the organization. “We are working on another world with it, not in the Peace area, but in a different area, because our interests span the curriculum for schools. More to come on that,” Matthews says.

Seeing more people play through these experiences is one measure of success. But the longer-term impacts that teaching through Minecraft could have on the world are a bit harder to quantify — though infinitely more rewarding.

“Knowing that we're having a real, meaningful impact on individuals' lives is the thing that really keeps us going,” says Matthews. “At a higher level, the studio’s purpose is to build a better world through the power of play. What we're doing with Minecraft Education is really embodying that mission and going deep to bring it to life.”