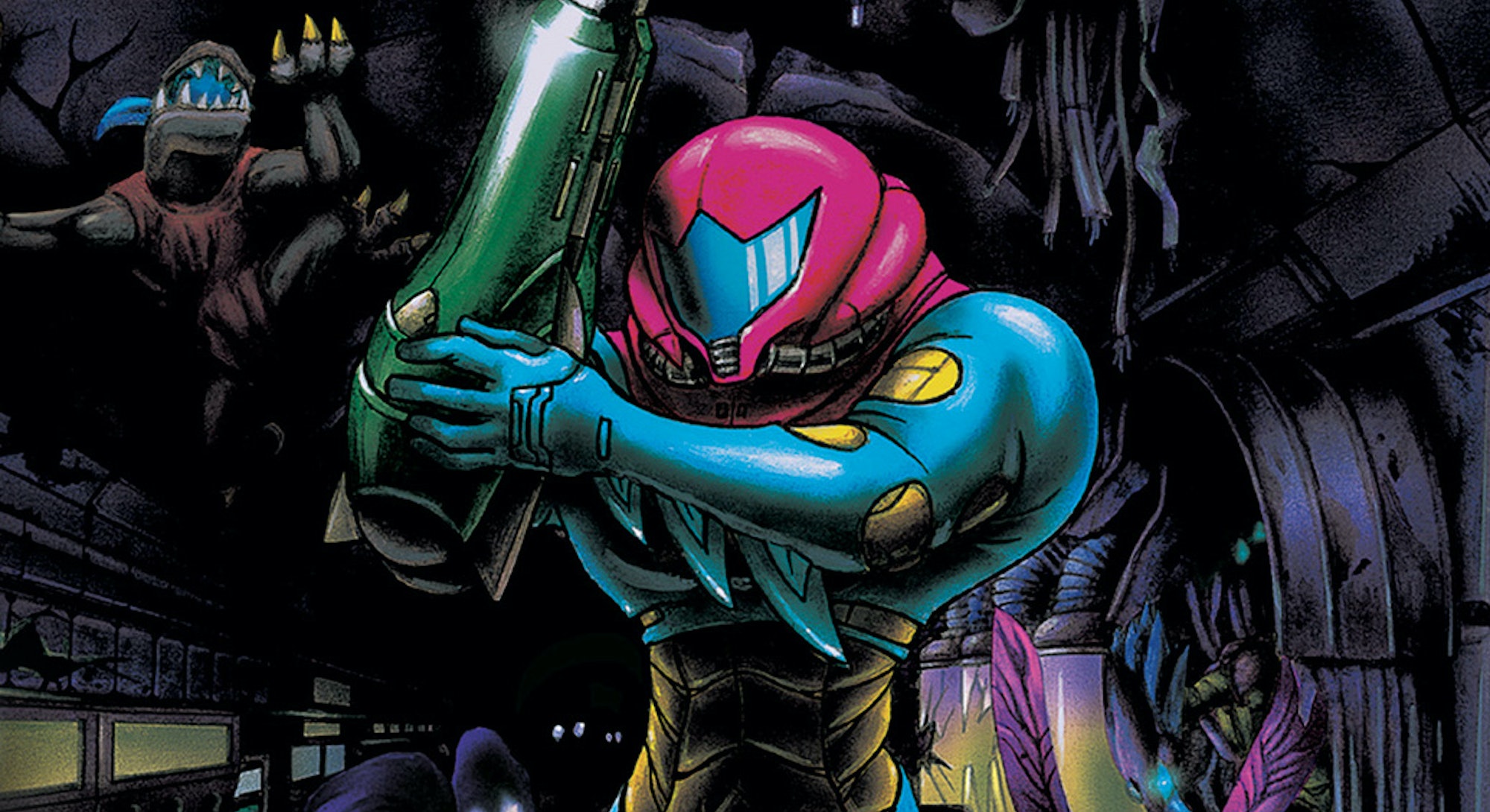 As I stare at the tiny 3DS screen before me, a trickle of anxiety swirls around my chest.

I try to steady my breath while my white-eyed, blood-hungry doppelgänger stomps towards me. With each step, its boots clang ominously upon the metal grating before it suddenly stops just above my hiding place. Heart audibly thumping, my sprite-drawn heroine — the legendary bounty hunter Samus Aran — lays curled in a helpless ball.

It’s hard to believe that mere moments ago, I was the hunter, the bold adventurer blasting my way across a parasite-infested space station. Now, as the game’s stabbing staccato soundtrack culminates in a skin-crawling crescendo and the clone exits the dilapidated corridor, there is no doubt that I am the prey.

This is what it feels like to play 2002’s Metroid Fusion.

When I pitched the idea of writing about this nearly 20 year old Gameboy Advance game to my editor, I naively expected Metroid Fusion to offer up enjoyable retro blasting. Instead I discovered an utterly isolating, nail-biting experience. To make matters worse, I’d decided to play Fusion in the midst of a particularly rough, real-world break up. With Samus left weak, alone, and struggling to adapt to her new surroundings, I found myself relating to our heroine on a jarringly raw level.

So much for sitting down and blasting some aliens.

Late to the Party is an Inverse series that offers a fresh look at retro video game classics from a newcomer’s perspective.

The origin of Dread

So why am I playing an ancient game that’s sending me into cold sweats? Well dear reader, it’s to prepare me for the release of the aptly-named Metroid Dread. Like many ‘90s gamers, I was raised on the blocky 3D polygons of the original PlayStation, leaving a 2D-shaped Samus Aran blindspot in my video game history. It was high time that I donned Samus’ Power Suit and saw where all my favorite indies got their best ideas. Fusion was the perfect starting point for my modern Metroid mission considering it’s a prequel to the upcoming Dread.

The first thing that struck me about Fusion is its atmosphere. Despite the limitations of the Game Boy Advance hardware, Nintendo wastes no time dragging you by the hair and yanking you into Samus’ terrifying world.

Beginning with a dramatic pixel-art cutscene, we find our intergalactic heroine rushed to hospital. After encountering a deadly parasitic organism known only as X, Samus’ suit becomes infected, leaving her fighting for her life. She survives, but only thanks to the Galactic Federation’s research team injecting her with cells from a dead baby Metroid, creating a rough and ready anti-X vaccine. It’s only after all that that the game truly begins.

In all honesty, my first hour with the game was a massive shock to the system. Rudimentary, confusing and unrelentingly difficult, it rubbed my coddled modern gamer brain completely the wrong way. Fusion’s first hour makes it abundantly clear this world isn’t here to help Samus — it actively wants her dead.

Struggling to find my place in this strange and lonely world, progress that should have taken about ten minutes instead saw me aimlessly wandering the same corridors for hours. Though to be fair to early 2000s Nintendo, what impeccable corridors they are. Despite my waning patience and muttering of less than Nintendo-appropriate language, I always felt the pull to keep exploring this skin-crawling space station. Why? Because Fusion’s unknown horrors were too enticing to resist. Channeling that trademark sense of isolation that makes the Metroid Prime games so immersive, Fusion’s tale of insidious flying parasites lends an alluring sense of fear and unpredictability to Samus’ running, jumping, and blasting.

Where other Nintendo games dabble with creating a sense of unease, Fusion fully commits to creeping you out. Roaming the eerily deserted research station, its stark and haunting soundtrack effortlessly sucks you into a foreboding realm.

It’s no secret that Metroid lead Yoshio Sakamoto had an unrequited love for the Alien franchise. (The 2004 DS game Metroid Prime Hunters: First Hunt literally describes its enemies as xenomorphs in homage to the iconic movie monsters.) But thanks to the X parasite’s love of reanimating dead organisms, Fusion often feels like a nod to John Carpenter’s body-swap horror The Thing, too.

While initially frustrating, I soon began enjoying Fusion’s unforgiving logic. In its dimly lit deathtrap, you are the outsider. As such, every new area must be treated with suspicion, caution, and a healthy dose of fear.

With every lingering shot of its slime-drenched corridors, Fusion makes you painfully aware you’re all alone. Experiencing this virtual isolation while grappling with my own sudden solitude, Fusion’s dark world often felt a sprite-art mirror to my own life.

It’s not just the fear of isolation that haunts Samus. The world is utterly brimming with vicious enemies, including the aforementioned X parasite that’s set to play an integral role in the upcoming Dread. With Samus underpowered in the game’s early hours, Fusion’s enemies can send you crumpling to the floor with just a few hits.

In what feels like a throwback to arcade classics, I soon learned the best strategy for survival was to simply run into each new area relentlessly mashing the “fire” button. Sprinting across the side-scrolling space station, my utterly unhinged avatar charged into every room like a woman possessed, blasting everything in sight. It’s not pretty or graceful, but it certainly got the job done.

Thankfully, Fusion’s brilliant bosses offer a meatier tactical challenge. Much like that initially frustrating exploration loop, facing each new fearsome foe can seem like a hopeless endeavor. The first time you encounter the gargantuan water dragon, Serris X, for example, this impossibly swift screen-filling serpent appears nigh-on-impossible to beat. After an embarrassing amount of time figuring out how to avoid its furious attacks (switching between clinging to the ceiling and diving in the water) when you do finally slay it, there’s an immense sense of satisfaction. It’s this grueling, grindy approach to boss battles that defines your stress-inducing encounters with all of Fusion’s brutal behemoths.

If these wit-testing showdowns weren’t enough to contend with, you also have to grapple with an evil version of yourself throughout your journey. It’s these chilling encounters I alluded to earlier, where Samus is stalked by her sinister, expressionless genetic clone. Much like the sphincter-clenching robot chases teased in Metroid Dread, there's a tangible sense of tension coursing through these shuddering segments. The key isn’t to defeat this evil foe — just to escape alive.

Thanks to its jarringly old-fashioned game design, Metroid Fusion won’t please everyone in the era of HD gaming. Though its early hours are littered with frustration, I soon became enthralled with Fusion’s eerie unpredictability. Despite bottomless loneliness and insurmountable odds, with each new encounter, Samus became stronger. Each power-up makes her more capable and better equipped to face whatever this world threw at her. It’s a comforting feeling, and one I began to relate to with each new day that passed — making Fusion an unexpectedly reassuring post-break up companion.

Whether you’re playing it with a broken heart or not, Metroid Fusion is still an absolute banger. Don’t let the superficial simplicity of its presentation and control scheme fool you — this is a masterclass in tension and atmospheric storytelling. If you want to catch up before Dread, don’t sleep on Fusion.

Metroid Dread will be released October 8, 2021 on the Nintendo Switch.