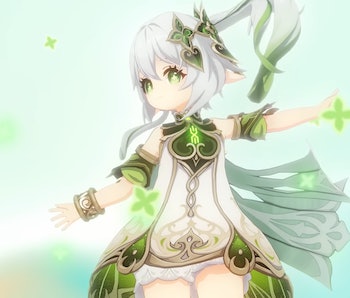 The Dendro Archon lives up to her name. As of Genshin Impact 3.2, Nahida, aka Lesser Lord Kusanali, has already earned a reputation as a “broken” unit that outdoes all other Dendro options in the game. Her utility as a Dendro-enabling support makes her a versatile option for any Dendro-based comp like Quicken and Bloom teams, especially with the Elemental Mastery buffs she offers. Nahida’s place in the Genshin Impact meta is still solidifying. However, early impressions already seem to have a good handle on how to use her.

Here are some tips on how to build Nahida into a Dendro support hero.

Nahida loves Elemental Mastery. Elemental Mastery strengthens any character that constantly causes elemental reactions like she does. However, Nahida especially needs it because her two ascension passives also boost allies’ EM, Bonus DMG, and Crit Rate depending on her Elemental Mastery:

Like most 5-stars, Nahida has her own 5-star weapon tailored to her kit. A Thousand Floating Dreams boosts her Elemental Mastery and her party members’ EM with it. Skyward Atlas, Lost Prayer to the Sacred Winds, and Kagura’s Verity also work because they increase offensive stats and have broadly applicable abilities that also happen to work for Nahida.

Nahida doesn’t need a 5-star weapon to challenge the meta. The craftable Mappa Mare is one of her best free-to-play weapons because of the EM and Elemental DMG buffs it gives. Sacrificial Fragments also raises EM, but you’re not guaranteed to get it from a banner and its ability is arguably less useful because of all the Dendro particles Nahida generates with her own talents.

It’s also hard to go wrong with the Widsith and Solar Pearl, which raise Crit DMG and Crit Rate respectively. These typically work better with DPS characters who need higher offensive power but also work with Nahida. Still, she arguably gets more utility from the F2P Mappa Mare because of the EM.

Nahida’s Elemental Burst, Illusory Heart, consistently applies Dendro to enemies within its field. The Deepwood Memories artifact set complements this effect with the 15 percent Dendro DMG Bonus plus the 30 percent Dendro RES debuff whenever anyone hits an opponent with an Elemental Skill or Burst. Nahida doesn’t even need to be on the field to trigger the debuff.

Gilded Dreams isn’t a bad option for Nahida but doesn’t offer as much team utility as Deepwood Memories because only part of the 4-piece bonus applies to the equipping character. Gilded Dreams works for those who want to buff Nahida’s personal damage with additional ATK or EM. You can also equip two Gilded Dreams and two Deepwood Memories artifacts to get the two-piece bonuses from both if the substats are way better than the four-piece set for either.

Elemental Mastery is the premier stat for Nahida. Crit DMG, Crit Rate, ATK%, and Energy Recharge are also reasonable substats. It’s best to prioritize EM as the main stat on an artifact and try to get as many of the secondary stats listed for the substats.

Nahida fits with many Dendro-based teams including Bloom, Quicken, and Burgeon comps. One of the most popular strategies suggests teaming her with two Hydro characters to extend the duration of her Burst as long as possible. Yelan and Xingqiu are optimum choices for this comp because of the personal Hydro DMG they also offer besides enabling Bloom.

Quicken and Aggravate also work. Nahida can regularly trigger Quicken reactions with her Burst, then it’s up to the Electro driver character like Keqing, Cyno, or Yae Miko to Aggravate the enemy. Cyno in particular had an issue with Dendro Traveler and Collei’s Dendro application matching the timing for his skills. Nahida removes that problem completely with her consistency.