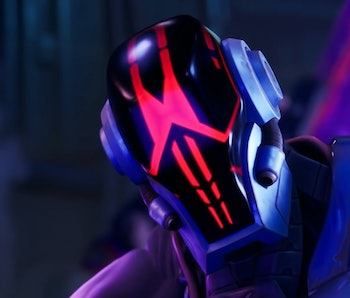 Fortnite’s Foundation skin is officially live, offering owners of the Season 1 battle pass a chance to quickly cash in on their paid cosmetic reward. The first step in that process is unlocking the outfit, which is obtained by visiting Mighty Monument, a Seven Outpost, and Sanctuary in any number of matches. In this no-nonsense guide, we’ll show you how to unlock the Rock in under five minutes.

The first location you must visit to unlock the Foundation skin is the Mighty Monument. Despite being an unnamed Landmark on the Season 1 map, it sticks out like a sore thumb for anyone remotely interested in the Foundation. Mighty Monument refers to the giant Foundation statue in the island cluster between the Joneses and Sanctuary.

Land on the rocks close to the statue, and the challenge completion should trigger.

There are multiple Seven Outposts on the Battle Royale map, but you only need to visit one of them to move forward with unlocking the Foundation Outfit. To get to one quickly, jump into the air current that surrounds Mighty Monument to get your character back up in the air. Make your way to this small grassy island on your right when you deploy.

There’s a Seven Outpost here. This is what it looks like.

Because Sanctuary is a named location on the Battle Royale map, you shouldn’t have any trouble finding it. Traveling from the island you’re currently on, head toward the docks area and go through this Rift to redeploy.

The Rift should offer you just enough elevation to glide your way to this marked location.

This is what Sanctuary looks like when you land there. Having visited the three required destinations, the stock Foundation skin should now be added to your cosmetic Locker.

With the Foundation skin now in your possession, there are still 10 additional rewards to unlock including Gliders, Pickaxes, Back Blings, and more. For those who can’t see the full list of challenges in-game, we’ll recap them below alongside the reward associated with each objective.

That’s all you need to know to unlock the Foundation skin in Fortnite.