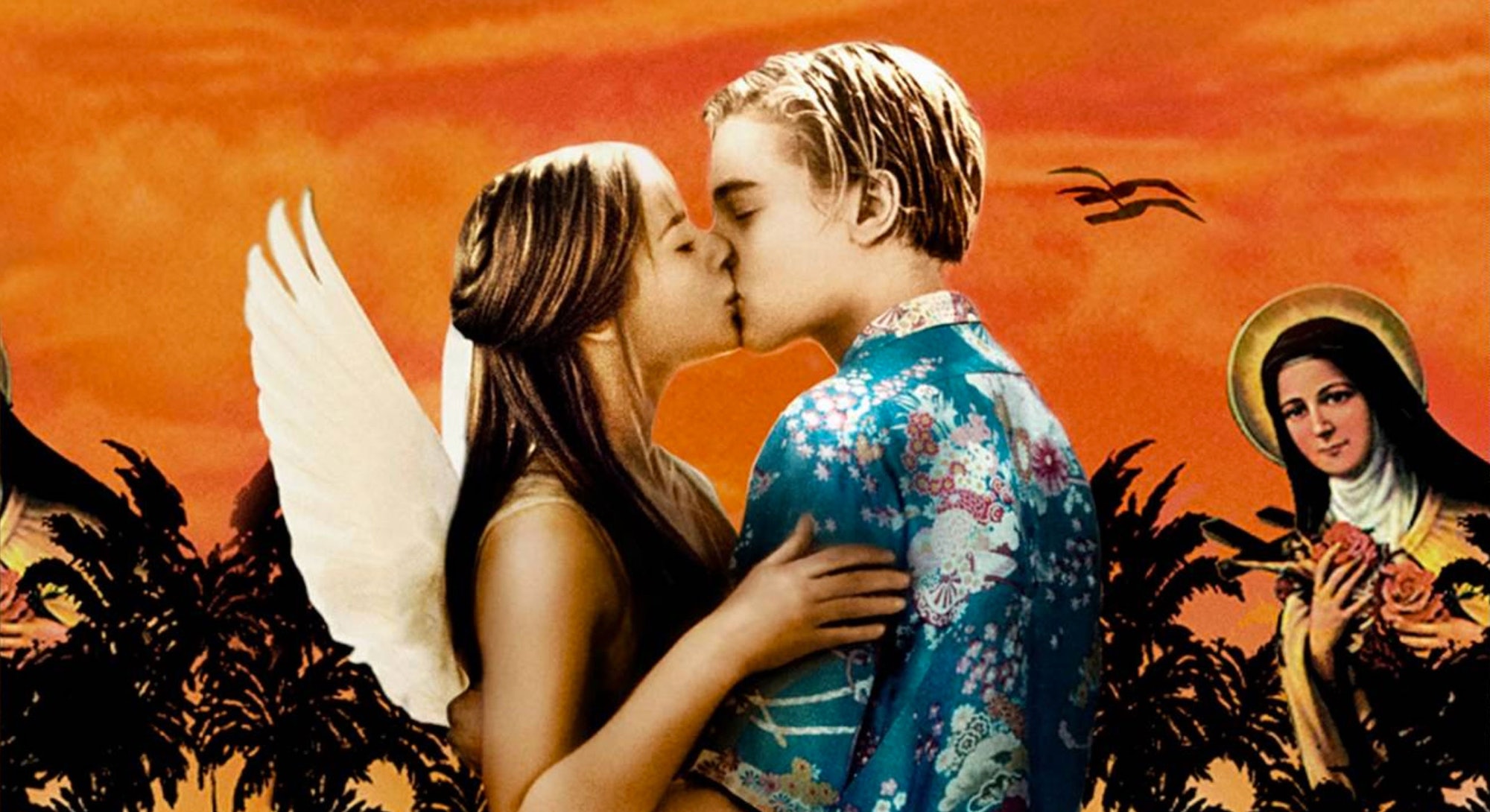 There is a yet-unnamed law of nature that ensures all internet discourse will invariably swing around to the artistic merit of Baz Luhrmann's Romeo + Juliet.

It's as inevitable as the moon's cycle or the tides' ebb and flow. The new moon always ripens until it's full, the dry shoreline is always drenched by the briny deep, and movie Twitter dissolves into sound and fury over the "legitimacy" of Verona, Italy circa 1996.

Whenever the storm churns up again, I admittedly can't help but add my voice to the chorus. I am firmly pro-Leo DiRomeo, and always have been. I even hauled my pimply 16-year-old butt to the theatre on opening day to get some culture in my veins. I love the movie now as much as I loved it when I was a hormone-addled teen who'd knife my own grandmother for a day out with Leonardo DiCaprio.

Earlier this summer, I added my two Ducat to the most recent debate cycle, then felt inspired to watch Quindon Tarver's interpretation of When Doves Cry for the first time in ages. (Tarver's untimely death back in April might've been the catalyst for Twitter's latest R+J bout.) Ten seconds into the video, my brain lit up with a life-changing realization:

O cruel ignorance! How can I call myself a fan of Final Fantasy or Romeo + Juliet if this connection has eluded me until now? Despair comes later. For now, there's a rabbit hole to plumb.

It's very common for game developers to find inspiration in films, but re-watching Romeo + Juliet has left me absolutely delighted with veteran Final Fantasy director and character designer Tetsuya Nomura. There's media that inspires, and then there's media that seeps into your bone marrow and never, ever fades. The latter clearly happened when Nomura first clapped eyes on Romeo + Juliet. As far as I'm concerned, this is no longer simply a quirky film people fight about on social media from time to time. It's a spore. A seed. A genesis.

An important sidenote: Nomura is one of Square Enix's best-known character designers. He also designed Final Fantasy VIII's monsters, and directed its battle sequences. His influence on Square Enix's general visual style can't be understated. That said, the Final Fantasy games that seemingly soaked up the highest doses of Luhrmann's influence — VIII and X — were directed by Yoshinori Kitase. There's no documented proof that Kitase is a fan of Romeo + Juliet. Given how closely he worked with Nomura on the games' visuals, however, I don't doubt some of the latter's enthusiasm for Luhrmann rubbed off on the former.

Romeo + Juliet opens with the perpetually open-shirted Montague Boys throwing wildly energetic shade at the sleek and seething Capulet Boys in the simmering parking lot of a Verona gas station. It takes two seconds to realize you're looking at a car full of Nomura's devil-may-care sidekick characters (Zell, Rikku, Prompto), and another brimming with his smouldering rival characters.

Then Tybalt Capulet (John Leguizamo) enters the scene—or, if you prefer, Seifer Almasy. A frantic fight follows, with both families flashing their insanely over-decorated guns. That's the moment your brain turns around and says, "There seems to be a mix-up. You're actually watching a Final Fantasy cutscene, right? That must be what I'm looking at. Right...?"

Next, observe the fateful Capulet costume party: The wild colors, the quick cuts, and Lady Capulet's exaggerated hairpiece, which Final Fantasy VIII's Edea assuredly wore better. Watch fireworks bloom over star-crossed lovers who form a fast but unbreakable bond under those fiery tendrils. Watch Romeo and Juliet ogle each other and make out in and around water a whole bunch, something Yuna and Tidus are fond of doing in 2001's Final Fantasy X. Notice how Romeo acquires a notable scar near his eye during his deadly struggle with Seifer — er, with Tybalt. The mark symbolizes a change for Romeo, a descent down a path that leads to ruin.

Oh Romeo, Romeo. I can't point at DiCaprio and name a single Final Fantasy hero who emulates him, because Leo DiRomeo is every post-1997 Final Fantasy hero. That first shot of Romeo — backed by a bloody sunset, lamenting his unrequited love for Rosaline while his wispy hair dances in the sea breeze — clearly caused something inside Nomura to flare awake with the light of a thousand Verona summer suns. Final Fantasy VIII and Final Fantasy X were well-tanned by the explosion, and the heat from that blast of inspiration still lingers.

Do you hear Nomura sing?

If I showed this article to Nomura, I suspect he'd look at me and say, "Well, yeah. Duh." In a June 2013 interview with IGN, Nomura admitted he doesn't play many games, but he is a movie fanatic. He watches two or three films a day, and his greatest cinematic influence is — surprise, surprise — Baz Lurhmann.

Unsurprisingly, the top brass at Square Enix said "Uh, no."

That's for the best, but now my life's dream is to see a musical with Nomura. Tommy is my top choice. Phantom of the Opera comes next. Hell, I'll endure Rent one more time if Nomura promises to whisper-sing "Without You" alongside me.

Interestingly, Nomura says it's not genre that moves him, but rather how a film's elements all work together. "It's not like I love one particular type of film — it's all about the balance," he told RPG Site in a July 2013 interview. "Les Miserables and Romeo + Juliet, which of course I also like —they are old, traditional plays that have been updated. I've never actually seen the original stage play, but the reason why I really like those classic plays is because of the total balance of everything—the balance of all the levels."

On the topic of events that conclude tragically, Nomura almost had a chance to flaunt his unabashed love for Luhrmann as the director of Final Fantasy Versus XIII, a companion game for Final Fantasy XIII. Versus XIII's development was troubled, and the game was eventually soft-canceled, gradually mutating into Final Fantasy XV. We've only seen a mere sliver of what Nomura intended for Versus XIII, including a 2008 trailer wherein Prince Noctis has a fateful meeting with Stella Nox Fleuret.

The story for Versus XIII was never solidified (Roberto Ferrari, one of the artists on the game, admitted that its narrative changed every three months), but the cutscene reveals Noctis and Stella were well on their way to being star-crossed lovers from rival families. Final Fantasy fans have since noticed that the initial meeting between Noctis and Stella (assembled by Square Enix cutscene director Jun Akiyama) resembles Lurhmann's take on Romeo meeting Juliet.

It's hard to dispute this claim, knowing what we know about Nomura. The two scenes share a lot of blood: The soft, seductive music hanging over the budding lovers, the coy glances accented by quick scene shifts, and even an aquarium backdrop. Granted, Noctis and Stella don't stare silently at each other like cats sizing each other up across a room, but Luhrmann's fingerprint is certainly on the scene.

Next time you get an opportunity to squeeze a post-1997 Final Fantasy game, take notice of how much Romeo + Juliet juice gushes from its pores. It's not just the wild-haired pretty boys with their unbuttoned, riotously-colored shirts. It's not just the dark rival who scuffs up Romeo's face. It's not just the underwater make-out sessions, the ornamental weapons, the jump-cuts, or the rough fate brought down upon star-crossed lovers. It's everything working together to give us the Final Fantasy experience that changed us in the late '90s and early '00s.

Many years have passed since 1996, and Nomura has undoubtedly seen billions of movies since Romeo + Juliet first took up real estate in his mind. Lurhman's strange retelling of the world's most cherished love story no longer covers Nomura's work from head to toe, but its influence is far from gone. Now, when I play Final Fantasy XV and Noctis perches on the back of the Regalia's back seat, I no longer just see Noct hanging out with his crew. I also see Romeo and his Montegue boyz driving through Verona in their bright, boxy convertibles, mirroring Noct's disregard for traffic safety and laws.

My third eye is forever opened. Surrender yourselves to Romeo + Juliet's epic retelling of the Bard's play, and join me in an enlightened paradise where nobody buttons up their loud-ass shirts.