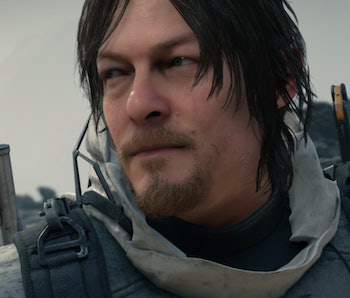 Death Stranding was one of the most talked-about games of 2019, and it might be getting some new content soon. Hideo Kojima teased this possible DLC with a trailer set during one Death Stranding's wartime levels that calls back to Sam Mendes' award-winning film 1917.

While the homage of the teaser is entertaining in and of itself, the implications behind it are even more exciting. If this DLC is real and takes place during a wartime portion of the game, then it's very possible that Mads Mikkelsen's character Clifford Unger could make a return.

The new Death Stranding trailer is set in the trenches of World War I, and its stylization is very similar to the trailer for 1917. It even starts with a plane crashing as it approaches the camera, and ends with a single shot of Sam Porter Bridges running towards the game's camera as "2020' appears on the screen, similar to the trailers for Mendes's movie.

Wartime segments are hugely important to understanding the relationships between characters in Kojima's most recent game. Without spoiling too much, these are the sections of Death Stranding in which Clifford Unger, Mads Mikkelsen's character, appears. As Deadman points out at one point in the game, these war-related beaches are for soldiers who die in combat with unresolved issues, and that's definitely a description that applies to Unger. It could also refer to a new character, but this tease does not hint at that in any way.

Another likely possibility is that 1917 director Sam Mendes could wind up making an appearance or cameo in the game himself, potentially as an NPC in a bunker somewhere on Death Stranding's expansive map. Kojima is well known for his connection to film directors, and the likes of Guillermo Del Toro, Nicholas Winding Refn, Jordan Vogt-Roberts, and Edgar Wright all made cameos in Death Stranding. Whether it's via a major role or just a small delivery station cameo, it would be cool to see Mendes included in some way.

If Death Stranding DLC is coming this year, as the teaser suggests, it's not clear exactly when. The most probable timeframe is around the game's PC launch, as it would make sense to come to a new platform with some new content. The PC release has a vague summer 2020 launch window, so we can expect that, and likely this DLC, sometime between June and September.

Even with all of this speculation, it is worth pointing out Kojima may just be having fun with his audience. The footage in the trailer is taken from Chapter 4 of the game, so the teaser doesn't actually feature any new content. The 'coming soon' message could also just apply to the PC version of Death Stranding or be poking fun at how that terminology is used a lot with movies. Still, Death Stranding fans would appreciate new DLC in addition to the free updates that Kojima Production is currently doling out.

Death Stranding is out now for PS4 and comes to PC this summer.