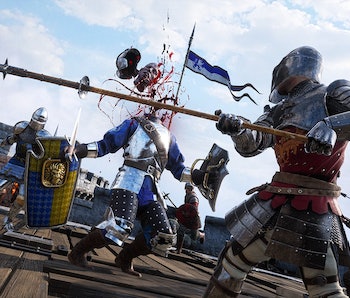 Blood is everywhere. Not just literally, in our bodies and bats and bricks, but in our history. Call it conquest or colonialism, we’ve been taking stuff from each other since the start. Our legends are full of epic battles over loot and land, and so are our poorly lit TV shows. Our games? Not as much as you’d think. There’s plenty of bird’s eye strategy, but what about the boots on the ground? The truth is battle is chaos, and chaos is hard to refine into something playable.

At a glance, the combat might seem uninspired. After all, we’ve been swinging swords in video games since we first learned it’s dangerous to go alone. Given the eleventy billion hours gamers logged in Skyrim, you’d think a similar system is at play here. You’d be wrong. These aren’t the featherweight weapons of action RPGs. The lethal arms in Chivalry II have heft. And you’re gonna need it.

A brief but effective tutorial takes you through the fundamentals of the combat system, which boils down to one word: balance. When you go toe-to-toe with an opponent the strategy is to block and counter, or stagger and strike. There’s a rhythm to weapon clashes that’s hard to define, but oh-so-satisfying. It’s a Souls-y approach that keeps the 64-person melees from getting out of hand.

There is no single-player mode in Chivalry II. Fortunately, the multiplayer experience is so good you won’t feel like you’re missing any action. Lobby and respawn times are quite short so the pace is quick. And while there is certainly a strategic element to the game’s various objective-based maps (mostly guarding payloads and checkpoints) things are not so precise you’re totally overwhelmed as a new player. Far from it. This is a great game to be bad at.

If you want to wax esoteric you could argue the bumbling noobs are actually immersive. It’s easy to see who’s new when you look across the field, just like a real battle. Throngs of footmen in the same helmet with the same halberd, punctuated by veteran swordsmen, archers and the occasional gleaming knight.

And just like real battle, it’s incredibly easy to accidentally whack an ally with your blade. Friendly fire is real here, but so is the “vote to kick” feature. Regardless, there’s a hilarity to your first few battles as you bravely charge into a scrum, haymaker swing an ax into three of your own guys, perish, and get booted.

A certain Monty Python-ness to Chivalry II adds some levity to all the dismembering. It is a gory, blood-spewing brawler that’s even better with friends. Just like its combat system, this game nails the balance between “bloody” and “bloody good time.”