“I mostly just wanted to make a fun game, so there was no sense in maybe accidentally hurting someone!” 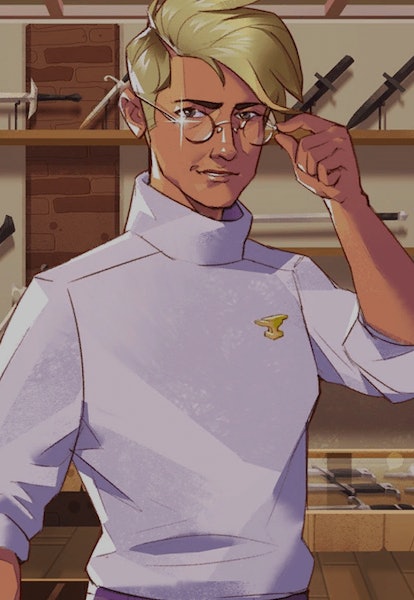 Boyfriend Dungeon is a dungeon crawler dating sim hybrid where your weapons transform into romanceable hotties.

Its treatment of an emotionally manipulative antagonist, however, has raised provocative questions about the kinds of trigger warnings people want to see in games. But at what point does a content warning become a full-on plot spoiler?

“Fiction can be a great way to explore and work through complex issues and feelings, but only if you're ready to do so,” Boyfriend Dungeon co-director Tanya X. Short tells Inverse in an email interview.

Boyfriend Dungeon initially gained positive attention for letting players opt out of phone calls from their in-game mother where she encourages the player. Disabling these calls allows those with parent-related trauma to still enjoy the game without having to confront their triggers.

But Boyfriend Dungeon faced intense backlash after players encountered Eric, a creepy character who stalks and attempts to emotionally manipulate the player-character. Initially, you can exile Eric by ignoring him, but he ultimately becomes one of the game’s main villains. It’s abundantly clear why Eric’s behavior can be triggering, so was this original content warning enough?

"This game may include references to unwanted advances, stalking, and other forms of emotional manipulation,” it reads. “Play with care."

Rather than describe a game as “intensely violent,” — like an ESRB rating might — proper content warnings state the specific trauma depicted, even at the risk of spoiling the story. High school horror sim Doki Doki Literature Club Plus took an effective approach in 2017 by adding an optional spoiler-filled content warning, detailing the exact nature of the triggering content. Anyone with a sensitivity to certain triggers could learn more if they were open to reading story spoilers. Should Kitfox Games have done the same thing, to begin with?

Kitfox Games has already promised to improve the warning, but the discourse surrounding Boyfriend Dungeon raises provocative questions for the industry at large.

Should all games include more explicit content warnings? At what point does a content warning spoil the experience? What’s a fair way to balance how games approach spoilers and triggers? Inverse spoke with co-director Tanya X. Short from Kitfox Games about content warnings and their future in gaming, along with what the developers learned from Doki Doki Literature Club.

Inverse: Why did you put a content warning in Boyfriend Dungeon?

Tanya X. Short: In playtesting, we found some people resonated with the writing of the main plot and characters in a way that made them uncomfortable. As a writer, it's flattering to be told your characters feel like real people, of course, but given that the main plot also drew from my personal experiences, I wanted to make sure nobody was taken by surprise.

Fiction can be a great way to explore and work through complex issues and feelings, but only if you're ready to do so. At the end of the day, I mostly just wanted to make a fun game, so there was no sense in maybe accidentally hurting someone! Or they can just opt out if it sounds like that kind of topic might ruin their fun entirely.

What do you think makes an adequate content warning?

Ideally, someone who has read the content warning has enough information to make an educated decision about whether or not they are emotionally prepared to engage with the game.

How do you think content warnings change the experience compared to ESRB ratings?

Content warnings help ensure the player has the correct expectations. Of course, if you're making a game that's all about surprises and twists, I guess it's possible it could 'spoil' that,

But Doki Doki Literature Club is a great example of a game that has plenty of twists that aren't ruined by knowing it's a horror game.

In fact, it has the psychological horror tag on Steam, and in some ways that in itself acts as a content warning. I'm glad they added one to the new premium version, to be more specific, but horror games are often the least in need of content warnings, simply due to genre expectations being what they are, whereas a family-targeted title has to be more careful not to misuse their audience's trust.

To what extent do self-insert protagonists affect the need for a content warning?

I do think it's more affecting when you play a game as "yourself." It's kind of like how the ESRB (based on various studies) differentiates between stylized/cartoonish violence versus realistic violence. Seeing Wile E. Coyote get hit on the head with an anvil is very different from witnessing a headshot in Call of Duty. And seeing a fictional character experience stalking or harassment is very different from feeling that you yourself are being stalked or harassed.

It's nuanced, of course, and the exact scale of the different impacts is unclear, especially since some people self-insert more strongly than others, but there's no question that they are different experiences.

Boyfriend Dungeon is available now on Xbox One, Xbox Series X|S, and PC.