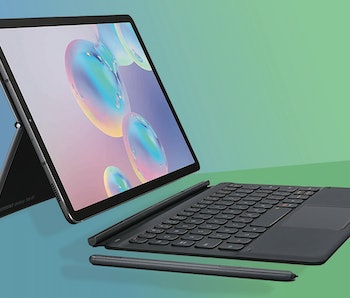 While they won't replace your PC or console of choice, the best tablets for gaming streamline your favorite mobile games for playability and performance. They also typically have more memory, a larger screen, and a better sound system than your phone — not to mention processors that are much better suited for speed. That said, just about every major electronics company has several models to choose from, and while most of them can handle apps, photography, and entertainment, not all are a good choice for gaming.

There are several specs to consider when choosing a tablet that will make gaming the most fun, but the two major ones are RAM and memory. RAM handles your device's short-term memory, so it'll determine how fast your device functions. Typically, the more RAM, the better. Standard computers start at around 4 gigabytes of RAM, while the most gaming-intensive PCs offer 16 gigs. Gaming tablets typically fall within the 4- to 8-gigabyte range, though for a cheaper model, you might need to go down to 2 gigabytes. The next thing to consider is the internal memory, which dictates how much data you can store on the device itself. Since modern games tend to be larger, 128 gigs is considered a good amount of storage, though most tablets allow you to add additional external memory if needed.

Last but not least, you'll want to look at the sound system and the screen size. More often than not, a better sound system will be worth the splurge, but the screen size is a double-edged sword; yes, a larger display will make for a more immersive experience, but it'll also be more difficult to store and transport — a downside when it comes to portable gaming. With all that in mind, here are the four best tablets for gaming, plus a hybrid console that's worth the consideration.

1. The Overall Best Tablet For Gaming

Especially for a middle-of-the-road price point, the Samsung Galaxy Tab S6 has extremely high ratings — 4.6 out of five, to be exact. Buyers say it excels in screen quality and ease of use, and the touch screen is nice, too. There are several more features that make it great for gaming: For one, its 10.5-inch screen and all-around AKG speakers make for an extremely immersive experience, while its long-lasting battery provides up to 15 hours of playback on a single charge. It also has a Qualcomm Adreno 640 graphics processor, 6 gigs of RAM, and 128 gigs of internal memory which can be expanded up to 512 gigs with a microSD. For $550, you get the tablet itself and the S pen, but for $674, you can also get the keyboard case, which transforms it into a use-anywhere PC. There's also a 256-gig internal memory version available and three colors to choose from.

One reviewer wrote: "Excellent Android tablet! This is by far the best Android tablet of the year and ever. The Tab S6 is really useful for gaming and Internet consumption as it has the snapdragon 855 and over 7000 Mah battery. I use it to game on and for minor work related tasks."

For light gaming, the Dragon Touch K10 tablet is an incredible value. It won't offer the RAM and memory needed by serious gamers, but it's an affordable option that'll keep you occupied while you're away from your PC. It's designed with a wide, vivid 800 by 1280 display, and it has dual speakers for quality sound, a long-lasting battery that runs for up to eight hours on a charge, and a quad-core processor for smoother gameplay. It also works with both 2.4 gigahertz and 5 gigahertz Wi-Fi connections. With over 600 five-star ratings, it's clear that with a $120 price tag, this is a steal.

One reviewer wrote: "I use my tablet for social media, e-mail and playing games. It's important that there is no lag time between when I touch the screen and when my game moves are recognized. Because a lot of games use subtle color differences in its games, I also wanted good color clarity. I got both! I am absolutely hooked."

3. The Best Option For iOS Gaming

Since Apple products typically prioritize sleekness and appearance over speed and graphics, they're not the most popular among gamers. That said, the third-generation Apple iPad Pro is packed with some of Apple's most advanced technology to facilitate gaming, it has even gotten PC fans to say it's worth the price tag. Due to its massive internal memory and solid RAM, it can definitely handle iOS games, but the value of this tablet lies in its versatility. It has two incredible cameras, a large vivid Liquid Retina display, four-speaker audio, and a 10-hour battery life, all of which combine to offer a great platform for both work and play. While this model has 256 gigabytes of internal memory, versions with 64 gigabytes, 518 gigabytes, and even 1 terabyte of memory are also available.

One reviewer wrote: The processing power followed by its nearly 4K quality screen [...] makes the iPad not only a great laptop replacement (especially with the upcoming iPad OS) it also makes for a great gaming and media consumption device."

4. The Most Portable Option For PC Gamers

In their search for a Windows 10 gaming tablet, most gamers land on the Microsoft Surface Pro 6. With an impressive 8 gigabytes of RAM and an Intel Core processor, it offers much more power for your favorite games — and since it's Windows, you can even run Steam. It weighs less than 2 pounds and is slim, so all that power doesn't mean it can't be portable.The 12.3-inch PixelSense display, crisp speakers, and up to 13.5 hours of battery life contribute to an immersive gaming experience.

One reviewer wrote: "Wicked stoked on this machine. The new cores really make a difference in gaming. Better battery life, light, and comfortable."

While it's not what most people picture when they think of a tablet, the GPD XD Plus console is a brilliant alternative for gamers. It's small enough to fit in your pocket and comes attached to all the necessary controls, but unlike handheld consoles like the Switch, the 5-inch screen and Android operating system also function as a tablet, so when you're done gaming, you can access your email, watch movies, surf the web, or post on social media. Thanks to its 4 gigs of RAM, 32 gigs of storage, and Hexa-core processor, buyers are raving: "This is a wonderful device for playing retro games."

More like this
Gaming
Jan. 25, 2023
"Mindboggling" Launcher layoffs prompt outcry and tributes to WaPo gaming vertical
By Jess Reyes
Gaming
17 hours ago
4 best weapons to upgrade first in the Dead Space remake
By Joseph Yaden
Gaming
12 hours ago
Dirge of Cerberus is still the most incoherent Final Fantasy game ever
By Willa Rowe
LEARN SOMETHING NEW EVERY DAY.
Related Tags
Share: