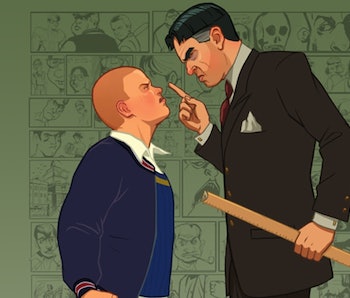 School is one of the cornerstones of pop culture — and life itself. We’ve all experienced its horrors and occasional sanctities, and it serves as a timeless setting for stories. High school in particular often feels like a giant cartoon: oblivious social cliques, impractical classes, and your unreciprocated crushes that can feel like the end of the world.

This sentiment is at the heart of what makes Rockstar Games’ 2006 gem Bully so special. The game brings all of those superficial elements of school to life in a vast open-world setting. Simply remembering its controversial reputation — the game was denounced as a “Columbine simulator” in a failed legal bid to change its ESRB rating — is a tremendous disservice to a unique coming-of-age story and a quintessentially cheeky Rockstar experience.

Bully is available for PS4, Xbox 360, and PC. Physical and digital copies should set you back about $15 — or less, if you happen upon a sale or used copy. The game is also playable through backward compatibility on PS5 and Series X|S.

The basic premise of Bully is fairly simple; you play as Jimmy Hopkins, a 15-year-old delinquent forced to attend a year’s semester at the fictitious Bullworth Academy. From there, you interact with the various social cliques that govern the school: the nerds, the townies, the preppies, the greasers, and of course the jocks. You then go on a ludicrous adventure to rise through the ranks of the school system and, ironically, put an end to the true bullies that terrorize the powerless students residing in it. That’s right, Jimmy Hopkins is basically a freedom fighter.

Like all the open-world titles Rockstar is known for, there is a lot to do in Bully. Missions can involve anything from protecting a student government candidate during their campaign speech, going on dates to a carnival, facing off in boxing matches, and even an absurd incident involving a drunken, homeless Santa Claus versus a more legitimate Santa Claus. You’ll run various side errands for cash, including mowing lawns, delivering newspapers, and even being the mascot for a restaurant. Plus, there’s always class to go to (or not, if you want to play hooky, it’s all your choice) which feature different mini-games that reward you with different skills and items as you progress. Learning is fun sometimes!

Speaking of items, Bully’s arsenal might not be a match for the firepower of the Grand Theft Auto series, but it certainly doesn’t disappoint. You’ll throw eggs, ignite firecrackers, do some slingshot slinging, and even hit some fools with a potato launcher. It’s almost enough to make the Ratchet & Clank series jealous. (Almost.) You’re constantly rewarded for nearly everything you do — which is something you can't say of everyday, mostly miserable, school life — so that’s rad.

But while the game’s personality and satirical humor can be clever, it shouldn’t serve as a surprise to anyone that it is still very much a Rockstar game, with moments and jokes that haven’t aged well. But despite its flaws, the game’s charm is in the finer details and a condensed open-world experience that feels more conquerable than GTA V or The Witcher 3. It's the more quiet aspects of going to school, and the resulting waves of nostalgia for perhaps the most awkward, and cringey time in our lives that makes Bully so memorable. There are hardly any titles with a setting like it, which ranks it among the most interesting titles in Rockstar’s storied catalog. Is it the best? Not quite, but it’s the ultimate oddball.

Bully is widely known, but not always for the right reasons. Thanks to the lingering media hyperbole surrounding the game, it’s easy to overlook how qualitatively good Bully is. But there’s a pounding heart to its madness — it’s about giving the insufferable troglodytes some richly deserved payback and, more simply, about growing up.