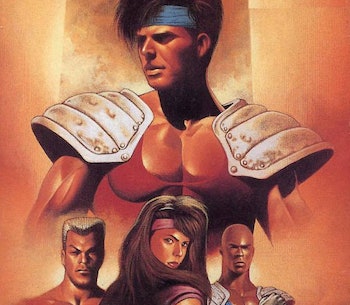 The opponent’s name was “K’s,” a 29-year old cyborg from Germany.

I was told that his special weapons were “weapon” and “arm.” I laughed, but sure enough, K’s had two long metallic arms that had an incredible reach. His legs were long too, meaning that the jump kicks which had been so effective in previous battles were useless. My close-up blades were at a serious disadvantage. Instead, I had to wait for K’s to make the first move, dodge that, and sneak in for the hits while he was still off-balance. Eventually, I was ready to face Jade, the Fighting King.

It took me a while, though. K’s was a struggle to get through, a matter of perfect timing and defensive strategy. I could easily see this game, Tuff E Nuff, gobbling up my quarters in 1993 when the game was first released. But my quarters are safe: If you’re a paid Nintendo Switch Online subscriber, it can be played right now by downloading the Nintendo Entertainment System app.

Tuff E Nuff is an enjoyable Street Fighter II clone with a fun post-apocalyptic twist. To understand why it was made, it’s important to know a little bit about Street Fighter II: The World Warrior.

Close-quarters fighting games have always been popular, but Street Fighter II broke new ground in 1991 with the idea of multiple playable characters. Each had their own special attacks, advantages, disadvantages, and background. Suddenly, a game was willing to let players pick out a playstyle that worked for them as opposed to the other way around.

Its multiplayer mode became a cash cow, making the game the highest-grossing arcade game in Japan in 1991, and then again in 1992. Similar blockbuster sales occurred in the U.S., the U.K, and anywhere a console could be plugged in. By 1993, Street Fighter II had become a franchise of its own, spawning two other games, and all three were top-sellers.

Players clearly wanted more fighting games, and Tuff E Nuff was among those that delivered. The game nicks some plot ideas from SF II, including the idea of a Japanese fighter (Syoh) rivaling an American (Zazi). But Tuff comes through with a wholly original setting in the year 2151.

After “the war to end all wars,” Earth has become barren and desolate, a place where “only the strongest” survive, the player learns in an opening scroll. During this “crazy time,” a man named Jade declares himself the fighting king and builds a huge tower. Many fighters have tried to fight him, but none ever returned. So now the last four have come to take down Jade and prove, once and for all, that they are ... tuff e nuff.

Beyond Syoh and Zazi, there are also Kotono, a female Japanese ninja armed with kunai throwing knives, and Vortz, an older wrestler from the Netherlands. These fighters each employ unique fighting styles — and therefore playstyles. While Syoh and Zazi are balanced, Kotono leans towards speed whereas Vortz is stronger and slower.

After you select a character, the game transports you to Jade’s desolate tower, where you start battling your way up. First, you take down your fellow heroes, and then on to the bad guys.

Some of these characters make absolutely no sense, like the Libyan ex-military commando named Dolf (?) who fights with a missile launcher. There’s also the New York street punk named Beans, a speedy samurai named Shirou with a sick sword, a martial artist named Rei, another wrestler named Gajet from parts unknown, the cyborg K’s, and finally Jade, the Fighting King, whose weapon is “aura.”

Apparently, there was more backstory for these characters in the Japanese version of the game (Vortz and Gajet are brothers?????) called Dead Dance, but all of that was cut from the international version for unclear reasons. It’s a shame because the game does feel a little empty without them.

But backstory or no, Tuff E Nuff a fun fighting game with a silly name, perhaps best played with a friend. It lacks the depth and range of Street Fighter II but has unique challenges all its own. And seriously, watch out for K’s arms. So annoying.