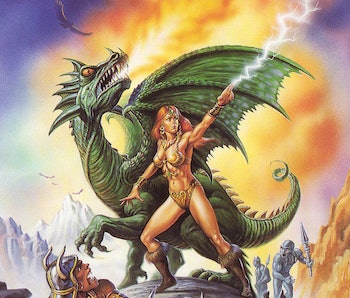 These days, the name Gainax is primarily associated with the anime studio’s biggest success: Neon Genesis Evangelion. The story of Shinji Ikari battling mysterious kaiju-sized Angels brought the studio into the international spotlight, both in terms of critical respect and commercial success. Gainax struggled with money issues pre-Evangelion (post-EVA too, for that matter). To help compensate for the expensive cost of their anime projects, the studio dabbled in video games for a brief period of time. The end result is one of the most underrated Sega Genesis fantasy games ever made, and it’s available to play right now if you’ve subscribed to Nintendo Switch Online + Expansion Pack.

Gainax is better-known for its bishōjo games (otherwise known as “girl games”) like Princess Maker, which would become the studio’s biggest commercial project for a time. There were even internal discussions about the studio switching over to games full-time.

That never happened, but the studio did stay involved with games development for some time. It began loaning out employees as consultants to companies searching for crossover appeal with anime fans. One such company was Game Arts, which was in the midst of transitioning from PC games to consoles.

The 1992 game takes much of its influence from an anime masterpiece: Nausicaä of the Valley of the Wind, Hayao Miyazaki’s dystopian masterpiece which takes place in a world where giant mutant insects and futuristic technology battle it out. The interplay of high-tech and mystical beasts was an intriguing one, which Alisia sets out to replicate.

The game’s plot is mostly covered in its manual, which notes that Alisia is the daughter of a magician who attempted to stop Baldour, “the prince of all things evil.” It didn’t work out so great for her dad, but Baldour has had problems of his own, like having to rest in a giant cocoon. But like a beautiful butterfly, Baldour is getting ready to hatch, which means Alissa has some unfinished business.

Nearly all of this plot is limited to the game’s manual, so a readthrough might give players a better context regarding what is happening. But on screen, the main action comes with Alisia and her four monsters. Like Pokémon, only one is available at a time, each with different abilities. There’s a dragon, a raven (hyped up as a “Thunder Raven”), a literal ball of fire, and a “boomerang lizard.” The four beasts are all pretty cute — I’m partial to the lizard, even if its boomerang isn’t the most effective at halting swarming enemies.

The enemies come fast and furious, spawning suddenly right in front of Alisia and quickly dealing damage. There are almost seventy beasts throughout Alisia Dragoon, mixtures of goo and teeth that fit in well with Nausicaä. An old interview actually collects some of the gorgeous art, and the transformation into pixelated sprites is worth seeing.

Like many older platformers, memorizing the patterns of enemy appearances is crucial towards future success. Your second playthrough of 1-1 will likely go much smoother than your first, and so on. The game’s vibrant visuals and challenging gameplay mean that for anyone looking for a retro fix, it’s certainly worth exploring Gainax’s forgotten video game past.