“The story grows stranger at every turn.” 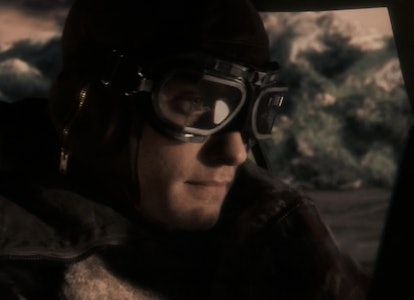 Nearly 17 years after it was released, it still seems miraculous that this movie was made at all. A science-fiction effort from the early 2000s built on the bones of an original short, this film went on to become a full-on feature-length Hollywood territory, with all the star-power that comes with it — and some behind-the-scenes woes, as well.

Sky Captain and the World of Tomorrow writer-director Kerry Conran grabbed the attention of producer Jon Avnet with his homemade short film, and Avnet fully financed the feature-length version, drawing in the likes of Jude Law, Gwyneth Paltrow, and Angelina Jolie to bring this one-of-a-kind vision to life.

The first-time filmmaker delivers a startlingly original vision that’s deeply indebted to classic Hollywood while also pioneering new filmmaking techniques that would become commonplace in major blockbusters over the next decade and a half.

Sky Captain’s unique production history and filmmaking approach dominated the coverage when the movie was first released, and its box-office failure cemented it as an ambitious boondoggle. But as remarkable as the behind-the-scenes story may be, the onscreen result is just as entertaining and worth discovering — or rediscovering — whether you’re familiar with the backstory or not. Conran was one of the first filmmakers to create a live-action movie almost entirely on virtual sets, presaging the approach used on movies ranging from Sin City to Jon Favreau’s The Jungle Book.

In short: Sky Captain walked so The Mandalorian could run.

Conran’s frame of reference for his virtual environment is old adventure serials, film noir, screwball comedies, and other artifacts of vintage Hollywood, and he never once winks at the audience or breaks the illusion. Set in an alternate version of 1939, Sky Captain tells a globe-trotting pulp-hero story about the title character, ace pilot Joe Sullivan (Jude Law), and plucky reporter Polly Perkins (Gwyneth Paltrow), who uncover a sinister plot by a mysterious mad scientist known as Totenkopf.

As much as possible, Sky Captain also looks like a movie made in 1939, or perhaps in its own reimagined take on the time period, something that Polly would catch at Radio City Music Hall right after the showing of The Wizard of Oz she attends for a meet-up with a shadowy source.

Polly’s been investigating the disappearances of prominent scientists, and at that rendezvous with Dr. Walter Jennings (Trevor Baxter), she learns that the participants in something called Unit 11 are being picked off one by one, and Jennings believes he’s next. He hands Polly two unmarked vials and then disappears, dropping a blueprint on the ground.

Those dropped plans correspond to the design for a fleet of flying robots that suddenly attack the city, in the latest in a string of strange attacks on major metropolitan areas. The robot attack is recreated almost shot-for-shot from Conran’s original short film, and the imposing machines themselves look like a cross between the Iron Giant and Gort from The Day the Earth Stood Still.

As Polly runs through the streets of New York, dodging massive stomping robots and always framed in perfect key lighting, the city calls on Joe, who runs his own private air force and is a sort of proto-superhero, complete with a cool code name. Joe is, of course, also Polly’s ex, and they remain at each other’s side from the moment he rescues her from being smashed under a giant robot foot.

Polly is determined to get the scoop on the story of the missing scientists and the sinister Totenkopf, whether Joe wants her to or not. “The story grows stranger at every turn,” she tells her editor (Michael Gambon) in a telegram, as she tags along with Joe deep into the Himalayas.

Conran’s dialogue is more about gee-whiz comic book wonder than sparkling wit, but there’s plenty of clever banter between Joe and Polly, who’s a little bit Lois Lane and a little bit His Girl Friday’s Hildy Johnson. Both Law and Paltrow evoke classic Hollywood stars, and not just in their matinee-idol looks. “Could we just die for once without all this bickering?” Joe exasperatedly quips as he and Polly are trapped in a room full of dynamite, seemingly about to be blown to smithereens.

Law and Paltrow contribute as much to the movie’s throwback vibe as the retro visuals do, and Jolie gives the movie an extra jolt in her brief appearance as Joe’s other ex, Franky Cook, a British military commander with an eyepatch and an armada at her disposal. Despite her above-the-title billing, Jolie is only onscreen for less than 10 minutes, but she makes the most of it, bellowing “Alert the amphibious squadron!” in a tony accent like she was born to say it.

Sky Captain’s visuals may have been created almost entirely with computers, but it feels tactile and well-worn, like every frame was lovingly restored by a specialist in a dusty film archive. The muted color palette sometimes makes the movie look like a black-and-white film that’s been colorized, but Conran knows when to dial up the colors, whether that’s when Joe and Polly encounter strange prehistoric creatures, or when they witness a giant rocket ship in an underground lair.

In another nod to the time period, Totenkopf himself mostly turns out to be a MacGuffin, played via manipulated archival footage by the long-dead Laurence Olivier. The plot of Sky Captain is as nonsensical as any comic book or adventure serial of the time, but it would be wrong to dismiss the movie as style over substance, as many did at the time it was released.

Here, the style is the substance, a tribute to the exuberant incoherence of old-school genre storytelling. It’s disappointing that Conran never got the chance to make another feature film, but at the same time, Sky Captain contains enough vision for an entire filmmaking career. It’s a miracle to witness, every time.

Sky Captain and the World of Tomorrow is streaming for free on Pluto TV in the U.S.