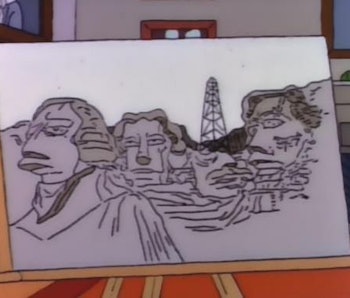 The Simpsons has found itself in the unfavorable position of becoming yet another piece of pop culture transformed into a weapon for modern politicians. The show always treated politics as a joke, but a GIF from the Season 3 episode “Mr. Lisa Goes to Washington,” recently used by Secretary of State Mike Pompeo during the Democratic National Convention, highlights the episode’s long-standing cultural power — and the ways in which it continues to defy anyone who tries to weaponize it.

Pompeo, who has used the image before to mock Speaker of the House Nancy Pelosi, was only 28 when “Mr. Lisa” aired in 1991, it’s certainly possible that he could have watched the episode when it aired. The show had just begun its run of cultural dominance, and politicians had noticed. In a 1990 interview, then-First Lady Barbara Bush expressed confusion at The Simpsons, calling it “the dumbest thing I have ever seen,” earning a back-and-forth with the show through open letters, which seemed to end on genial terms. But then, just a year later, President Bush brought the show up on the campaign trail, saying that American families needed to be more like The Waltons and less like the Homer, Marge, Bart, Lisa, and Maggie.

“Mr. Lisa” features the Bushes, but only briefly. It’s far more concerned with America’s self-image, and how far that image can be stretched. It does this in two ways, one far less predictable than the other.

The episode first revolves around Homer’s new obsession with a Reader’s Digest-style magazine, which then leads the family to an essay-writing contest with a focus on America. Lisa takes charge, going into the forest and letting a bald eagle inspire her.

After winning her local competition and a ticket to a national competition in D.C, the show breezes through a few other competing speeches from around the nation, riddled with cliches about the Liberty Bell and recipes for a country (like “a sprinkling of veto power”).

Once in Washington, The Simpsons runs through a number of familiar sights. The family stays at the Watergate, where the writers skip Nixon jokes in favor of “Bart makes mischief.” The Air and Space Museum and White House all get a quick viewing. There’s a Barbara Bush cameo where she's forced to reluctantly play tour guide because of the almighty power of the Simpson family’s VIP badges. Anyone who's spent time in D.C’s political culture will recognize the subtle reference to all important badges.

But the crux of the episode focuses on Springfield’s corrupt congressman, Bob Arnold. After posing together for publicity pictures, Lisa catches him in the act during an early-morning trip to see the statue of a forgotten feminist icon. It is here where Secretary Pompeo takes his GIF. After Lisa overhears Arnold's shady dealings, she up her planned speech for the contest, “The Roots Of Democracy,” crying and forlorn that the American Dream was nothing more than a lie.

Embittered, Lisa delivers a new speech at the contest, this one titled “Cesspool on the Potomac.” Up until this point, the episode is a fun jaunt through tourist locations with typically high-quality absurd jokes (Homer reading his magazine: “Then I heard the sound that all Arctic explorers dread, the pitiless bark of the sea lion! “) and easy targets (a highly annoying song-and-dance man performing songs about the problems of Congress will trigger anyone who remembers back to the Capitol Steps).

But then, for the best punchline of the episode, the show plays it straight.

As Lisa gives her speech, one of the contest’s judges, a Senate aide, leaps into action. He calls his boss, alerting him of the unfolding crisis: “A little girl has lost faith in Washington!” Bob Arnold is quickly busted by the FBI (“You work quick!” “I work for Uncle Sam.”) and summarily thrown out of Congress, disgraced. The action goes all the way up to President Bush, who tells a visiting dignitary that his bosses will be pleased with this.

“Your bosses?” the dignitary asks.

“Oh yes sir! All 250 million of them!” Triumphant music plays.

Lisa loses the contest, but her words are shown to have a real effect on the world. For The Simpsons, the idea that the American system could work quickly and efficiently to help its people and kick out bad actors is the biggest joke of all. It’s a message that Secretary Pompeo seems to endorse, and many associated with the show were quick to point it out.

"Is this a cry for help?" asked Lisa's voice, Yeardly Smith.

And writer Bill Oakley brought the '90s history of contention right to the forefront when he retweeted a fan account with a forceful claim: "Denigrating Simpsons fans didn't work well for the incumbents back in 1992, you smarmy little bastard."

Ultimately, The Simpsons doesn't discriminate between Democrat and Republic. It mocks everyone equally, and the only mistake you can make is in thinking this mockery can be used to further one political agenda over another. Or, in the words of Lisa Simpson:

"The city of Washington was built on a stagnant swamp some 200 years ago, and very little has changed. It stank then, and it stinks now... And this will be one nation, under the dollar, with liberty and justice for none."