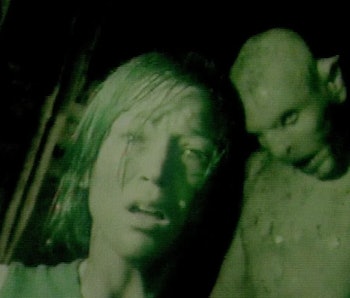 “Horror movie.” Just those words alone offer up their own set of expectations. As Carol J. Clover, a Scandinavian literature scholar, writes in her book, Men, Women, and Chainsaws: Gender in the Modern Horror Film, folklorists tend to dismiss horror movies “as products too mediated by technology, authorial intention, and the profit motive to be seen as folklore in any authentic sense.”

Ultimately, Clover states that horror movies don’t look anything like folktales because of those critical distinctions. While it may be hard to argue how and if films should be considered folktales, at the very least, there are plenty of movies that are inspired by them.

Horror movies can offer clever and frightening variations of a folktale, and this 2005 horror from Neil Marshall does just that. Now streaming on Amazon Prime, The Descent takes viewers on a riveting, if claustrophobic, adventure.

The Descent all starts with Sarah (Shauna Macdonald), Juno (Natalie Mendoza), and Beth (Alex Reid), three friends who love the outdoors. There isn’t any discussion of why they love the outdoors, exactly, but their actions speak louder than words. When they go whitewater rafting together, pushing through rapids and scenic forests, their joy is tangible. They even knock each other out of their raft at the end of the journey, just to keep things light.

But that all ends on the ride home. Sarah, driving with her husband and young child, gets into a car crash, and she is the only survivor. She wakes up in a hospital colored sickly green, traumatized beyond belief at what has happened.

A year later, Sarah is ready to try again, with Juno and Beth, as well as their friends Sam (MyAnna Buring), Rebecca (Saskia Mulder), and their new friend Holly (Nora-Jane Noone). Like they did when they were whitewater rafting, the group is exploring the Appalachians in North Carolina. But this time, they want to try exploring a cave.

While set in the U.S., The Descent was filmed in the United Kingdom. Those lush forests are in Scotland, and the tight, claustrophobic cave is a series of sets shot in London. The actors do not bother with American accents, and there’s no real explanation of what people from the U.K. are doing in America. Far from detracting from the movie, this adds to its folkloric nature: While this is technically happening in one place, it could be happening anywhere.

The cave system they are exploring is tight. As soon as the physical descent begins, the movie changes to its true form, with close shots and darkness, only the brightest colors breaking through the spell. While the colors ostensibly come from flashlights and torches, director Neil Marshall douses the caves with red. The movie brings the viewer very close as the audience watches the group struggle through one claustrophobic spot after another.

A challenge is ostensibly what the group wanted, after all. But then a cave-in causes Juno to reveals that she chose this cave system specifically because it was uncharted and unnamed. She hoped to name it after Sarah, which is sweet but presents them with a problem. Nobody knows where they are. All they have are their flashlights, flairs, and a handheld camera that gives them a little night vision.

Thinking she sees light, Holly accidentally falls, injuring herself. And then, just when things couldn’t get worse, it becomes clear that they are not alone. Something is down here with them.

Coming into The Descent with an idea of what happens in a horror movie, that’s not exactly a big surprise. But what is stunning is how Marshall can pass on the group’s sense of panic to the viewer.

Moving between bright color and near-total darkness with rock walls constantly taking up part of the screen, the movie makes it hard not to feel trapped alongside the group. At times, this can mean getting a little confused with who’s who in each situation. But like any good folk story, just because the exact details aren’t always clear doesn’t mean the general message doesn’t come across.

What’s attacking the group are Gollum-like mole men. The movie calls them Crawlers; they are experts at living in the caves while horrible at seeing. The group figures out the Crawlers are like bats, using echolocation to move through the dark. And, unfortunately, they want Holly.

The Crawlers get Holly, although not without a fight from Juno. But in Juno’s haste to take down the Crawlers, she accidentally strikes one of her friends, an action that reverberates throughout the group. The friends begin to split up.

There are two endings to The Descent, and the one available on Amazon Prime is the U.S. version. It all comes down to opinion, but I prefer this ending. Through the darkness, through the color, through the rock (which really sells the movie, thanks to Simon Bowles' excellent set design), The Descent is a suspenseful movie that never loses its tension, gripping you through the final frame.

The Descent is now streaming on Amazon Prime.