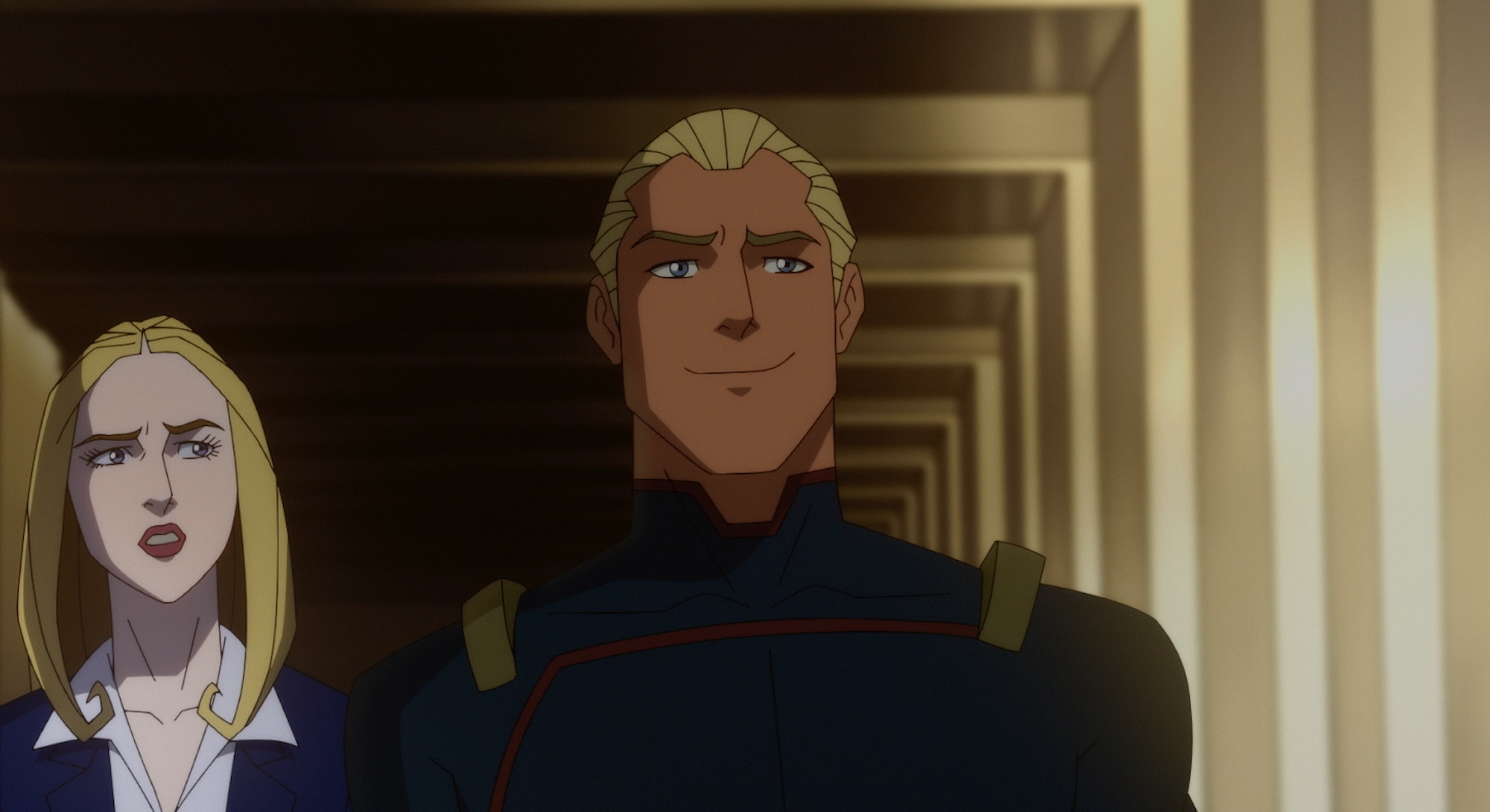 “Know who I am?” Billy Butcher asks with a hefty punch to the face. “Good. Let’s keep it that way.”

It takes three episodes for the title anti-superhero group's renegade leader to appear in The Boys Presents: Diabolical’s. But when he does... something’s off.

We absolutely still know who he is. But in the episode titled, “I’m Your Pusher,” the potty-mouthed anti-hero made famous by Karl Urban on Amazon’s flagship series looks and sounds a bit different. For a good 12 minutes, Butcher returns to the original style and storytelling vision of the man who created this whole universe, to begin with: Garth Ennis.

In an attempt to whet the appetites of fans, executive producer Simon Racioppa (Invincible), along with producers Evan Goldberg, Seth Rogen, and Eric Kripke, have released The Boys Presents: Diabolical — a new collection of stories inspired by the world Garth Ennis built. And considering the fact that Ennis penned an original story for the series in the vein of his original comic, you best believe this spinoff project is a special one.

The eight-episode season — which features the storytelling stylings of Justin Roiland, Awkwafina, Aisha Tyler, Andy Samberg, Ilana Glazer, Evan Goldberg, and Seth Rogen, and, of course, Ennis — broadens the scope of Amazon’s hit superhero series. Each wildly different bite-sized cartoon proves a worthy piece of supplemental entertainment to the main course (The Boys itself, returning June 3 for Season 3) while also serving as a hilarious, heartfelt, and homicidal love letter to the historic artform called animation.

Inspired by the original comic book run by Garth Ennis and Darick Robinson, The Boys follows a rag-tag group of renegades, led by Billy Butcher (Urban), who risk life and limb to expose the insidious nature of world-famous celebrity superhero group The Seven, led by violent narcissist Homelander (Antony Starr).

Diabolical operates by the rules established in the groundbreaking comic book, which has since been built upon in the live-action hit. The narrative connections in the spinoff aren’t always strong — they don’t have to be. These are the story details that lay the bricks of each hand-drawn building and color the peculiarities of every bug-eyed superhero (or “supe”) in The Boys universe.

And there are plenty of supes to go around. Diabolical expands upon the reality that supports these characters and follows through on a recurring theme: the great power that comes with an injection of Compound V (a superpower-giving serum owned by the same company that has a monopoly on superheroes) and the even greater trauma lurking right around the corner.

A multiverse of styles

Each episode gives a proverbial hat tip to a cartoon style that will surely pluck a heartstring or give the viewer a nostalgic twinge, the show also deals with some darker subject matter: themes of parenthood, accountability, generational trauma, divorce, social media identity, addiction, and more permeate the series.

Episodes like Rogen and Goldberg’s Looney Tunes homage, “Laser Baby’s Day Out” and Justin Roiland’s “An Animated Short Where Pissed-Off Supes-Kill Their Parents” (presented in the Rick and Morty co-creator’s signature style) explore issues of parental accountability and how adult decisions lead to childhood traumas. Ilana Glazer’s “Boyd in 3D” taps into the French animation style to show how a superhero makeover can lead to some quick dopamine fixes, with fame and addiction acting as catalysts for identity destruction. Awkwafina’s “BFFs” gives a sense of awkward agency to high school kids struggling to fit in, while immersing the story in a Saturday morning cartoon flair. And Andy Samberg’s “John and Sun-Hee” shows through the lens of Korean horror that, when all is said and done, it’s best to leave an all-powerful hero-creating medicine alone and let nature take its course — no matter how heartbreaking that choice can be.

Of all the episodes featured in Diabolical, two make clear connections to the source material: The Garth Ennis-penned “I’m Your Pusher” brings some die-hard fan-dreams to life by tapping into the original style of the books, finally enlisting Simon Pegg to voice Hughie Campbell — for those not in the know, the character was originally inspired by the Shawn of the Dead actor.

Audiences may be looking for hints of what to expect from Season 3 of The Boys, but not many can be found in Diabolical. That said, executive producer Simon Racioppa’s “One Plus One Equals Two” gives us a character study of Homelander, delving into his early crimefighting days. How did he go from doe-eyed do-gooder to the laser-eyed super-sociopath we all know and hate? If you’re dying to know the answer to that question, this episode sheds some light.

The power of the anthology

If it sounds like a lot to digest, it kind of is. But given the 12-14 minute running time of each episode, the portion size is perfect for the palette. When all is said and done, Diabolical is a break from the genre norm, giving audiences enough of the stuff they love before overloading the senses with a welcome onslaught of over-the-top gore, ridiculous laughs, and maybe even a few unexpected tears.

A joyful element of surprise accompanies each episode. Dipping into similar anthology sensibilities as, say, MTV’s Liquid Television animated series, or the classic Spike and Mike Twisted Animation specials, Diabolical showcases a deep investment in diverse perspectives and animation styles. It acknowledges some lesser-represented corners of the massive fandom while elevating the tried and true faves of the medium in ways that are both familiar and shocking.

The Boys Presents: Diabolical isn’t here to reinvent the wheel. There would be no point when The Boys already feels unique and unpredictable. But what it does do — and quite well, we might add — is remind viewers that animation isn’t just a storytelling tool reserved for children. With each installment acting as perverse little parables within The Boys’ ever-expanding universe, the spinoff proves that oftentimes, the best way to make the medicine go down is by pummeling us over the head with an oversized cartoon anvil.