“I don’t even know what a Substack is.” 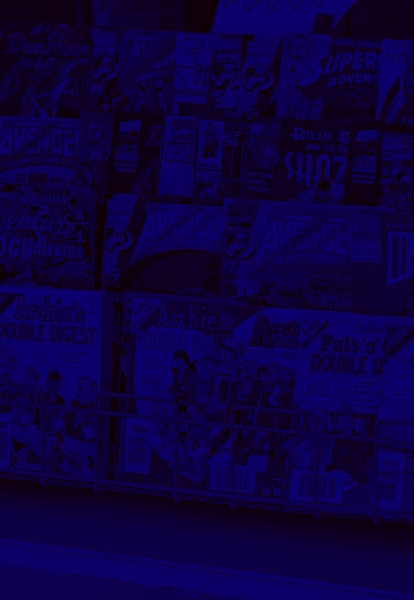 Substack’s move into comic book publishing went about as well as Marvel’s 2017 decision to make Captain America a Nazi.

A big reason why: Nick Spencer, the same controversial comics writer who penned the poorly received but high-selling Secret Empire arc, and later ran for political office on a platform of defunding schools to pay for cops (more on that later), is leading Substack’s foray into the world of superheroes and webcomics.

“The broken windows policing shithead is who Substack goes to for comics stuff? Certainly fits their pattern,” tweeted comics journalist Robert Secundus when the news was announced on June 9.

“Did Substack look back at their big transphobia scandal and think to themselves, We need to recruit more people with a history of alienating marginalized readers?” went another tweet from Daily Dot staff writer Gavia Baker-Whitelaw.

As bad as that sounds, the truth about Substack’s new comics strategy might be even worse than you think. Inverse spoke with the newsletter startup and reached out to various comic book writers and artists to get to the bottom of the company’s plans to shake up this industry just like it already has in the journalism world.

The truth reveals a fundamental misunderstanding by Substack of how comics work, and a troubling decision to apparently double-down on its worst tendencies as it expands its newsletter empire into new territory.

Spencer’s new job title at Substack is a mystery. “Nick is on the Partnerships team,” a Substack spokesperson tells Inverse. “We don’t focus too much on specific titles, [but] technically his is ‘Partnerships.’”

However, what he’ll be doing at the company is more concrete. Perhaps a little too concrete.

“To accelerate our growing fiction writer base, we approached Nick about working with comic book writers to help them hire artists and a small production team,” the spokesperson says. “We have already begun fostering our fiction writers and are working with Nick to get great comic writers up and running on Substack as soon as possible.”

If you read the above and feel as if that phrasing feels particularly writer-centric and dismissive of the many creators responsible for making a comic… well, look like a comic — sorry, pencilers, inkers, colorists, and letterers — then you can at least feel comforted by the fact that others have noticed, too.

“Substack is the platform and the writer is the publisher.”

Among the prominent critics of this move is Cully Hamner, a comic book artist best known for his work on Green Lantern: Mosaic, Blue Beetle, Black Lightning: Year One, and Detective Comics. Here’s how Hamner unfurled his thoughts to Inverse:

“The announcement and its seeming dismissal of the idea of artists as creators — basically conferring that status only on writers, and considering the visual part of the equation as merely part of a production assembly line the writer would hire and manage — only highlights the continual misunderstanding, by those outside the craft (and some inside the craft, unfortunately) as to what it is that artists — visual creators in a medium that hinges on a visual vocabulary — actually contribute to what we know as a comic book.”

Other writers and artists Inverse reached out to declined to comment, mostly due to a lack of understanding of Substack's new business model, or the company itself.

“I don’t even know what a Substack is,” says one comics creator. “This and NFTs are all a mystery to me,” jokes another.

Substack confirms that it’s only approaching writers and plans to fund their comics project through its Substack Pro program with zero stipulations. Whether those writers want to use that money to pay other artists is up to them.

“In our model, including when we offer an advance, Substack is the platform and the writer is the publisher,” the company’s spokesperson says. “The writer fully owns their work.”

That part sounds great, though it’s not exactly an innovation for the comic book industry (Image Comics has offered creatives the chance to own their work for decades). But as Hamner points out, there’s no reason Substack can’t give the same lucrative deals to artists it’s already handing out to writers.

“It does seem to me that there's no reason that Substack couldn't make deals with well-known artists, who would, in turn, hire writers to manage,” Hamner says.

The problem with Substack Pro

To fully understand what’s happening here requires a look back into Substack’s recent history. The company ran into controversy earlier this year when it emerged that Substack has been secretly paying a number of writers. Initial reports, including one from Vox, claimed Glenn Greenwald and Graham Linehan were among the list, though Greenwald denies it and these claims were later debunked.

(After leaving The Intercept, which he co-founded, Greenwald continues to use Substack, with one recent report claiming he earns between $80,000 and $160,000 per month through paid subscriptions. He’s recently faced criticism for claiming that a “decrease in the lesbian population” is due to trans men. Linehan, also on Substack, has been banned from Twitter for making anti-trans comments.)

It was a scandal in media circles. Substack had been paying content creators in private, seemingly at odds with public-facing statements that writers earned money purely through subscriptions.

io9 co-founder Annalee Newitz quit the platform as a result, calling Substack a scam and writing, “They claim to offer writers a level playing field for making a living, and instead they pay an elite, secret group of writers to be on the platform and make newsletter writing appear to be more lucrative than it is.”

Substack subsequently went public about its payment plan, titled “Substack Pro,” and revealed that it was paying “more than 30 writers” offering “a diverse set of viewpoints — though none that can be reasonably construed as anti-trans.” The new comics program is part of the Substack Pro initiative, and specifically an outgrowth of a new evolution into working with fiction writers. Novelist Maggie Stiefvater currently uses the platform to share short stories, for example.

“Thanks to the early promise fiction is showing on Substack, the team has already started to offer deals to fiction authors, although those efforts are nascent,” Substack’s spokesperson says. “Nick Spencer will be responsible for really helping grow this initiative in the comics space.”

Which brings us back to Spencer himself.

Spencer is, to say the least, a curious figure in comics. He’s no slouch when it comes to sales. His Amazing Spider-Man series is a consistent high-seller for Marvel, outperforming the majority of its peers despite being years into its run, and his Secret Empire miniseries from 2017 performed well, despite — or, perhaps, because of — the controversy surrounding it. That controversy is part of what makes Spencer the figure that he is — his seeming inability to shy away from upsetting people.

If it’s not turning Captain America into a fascist (the central conceit behind Secret Empire), it’s apparently suggesting that heroes shouldn’t punch Nazis, or creating supervillains based on right-wing stereotypes of the left. Outside of comics, his 2005 run for Cincinnati City Council saw him pledge to increase police presence, with the funding coming from defunding social programs. He even went on record complaining about a “glut of social services” in the city.

“We are big fans of Nick Spencer.”

“We are big fans of Nick Spencer,” a spokesperson tells Inverse. “He has deep experience not only writing comics but also navigating the industry. Nick understands what it takes to succeed and what writers need to feel artistically supported.”

(It should be noted that a week after the news that Spencer had signed up with Substack initially broke, Marvel announced he would be departing the Amazing Spider-Man comic book series with September’s #74.)

The case for Substack

So, what does Substack have to offer creators that its competitors don’t, beyond upfront payment? The answer might be key to creators willing to be patient.

“With the Substack model, all comic writers and artists own the IP and share their work directly with subscribers,” the Substack spokesperson says.

It’s that first part that’s particularly important. Unlike virtually every publishing agreement in comics — outside Image Comics and Panel Syndicate — creators retain all rights on work published on Substack, including the rights to republish material through other publishers, as well as all media rights. That means Substack takes no cut of any potential movie or TV adaptations.

In theory, this could allow creators to fund new work published initially through Substack, and then release that same work in a traditional print format through another publisher, where it can find an entirely new audience at almost no cost to the creator. While the idea of taking webcomics to print is nothing new — publishers from Image and Dark Horse to Drawn & Quarterly and Macmillan’s First Second imprint have been doing it successfully for years — this would be one of the few (if not the only) occasions where comic creators could assume no financial risk during the initial online serialization of their stories.

The comics program is still in its early days at Substack, by all reports; the company suggests that Spencer is just beginning to reach out to the creative community, and only a handful of projects are underway at most. Spencer might have his work cut out for him.

Correction: An earlier version of this article claimed that Glenn Greenwald and Graham Linehan are part of Substack Pro. We regret the error and it has been corrected.