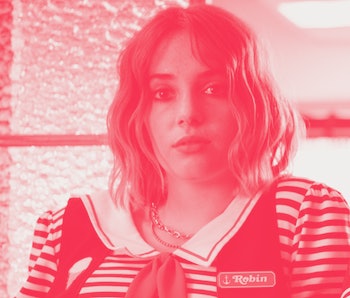 Stranger Things Season 3 introduced Robin Buckley to audiences, and she quickly became a staple of the popular Netflix series. An employee at Starcourt Mall’s Scoops Ahoy, Robin befriended Steve and became involved with the Russian plot, and it seemed her participation in some of the season's biggest mysteries was just harmless happenstance. A new fan theory blows that out of the water by suggesting that Robin’s role in Season 3 could reveal a new Russian plot ahead in Season 4. Let’s dissect.

Reddit user Animestrangerthings has an explosive interpretation of Robin’s backstory that suggests she helped break the Russians code because she was a covert spy. Robin, a Russian spy? It seems like a stretch, even for Stranger Things. After all, there didn’t seem to be anything mysterious or shady about her character, right? The theorist, however, has assembled a horde of evidence that might convince even the most skeptical of fans.

Without Robin’s help in Season 3, no one would have discovered that the Russians had also infiltrated Starcourt Mall. While Robin has a penchant for languages, she was able to decode the Russians’ radio message fairly quickly. Maybe a little too quickly. Here’s the gist:

“...the Russians' plan is for Robin to help crack the Russian code, help Steve's friends close the gate so that all of Steve's friends, including himself, trust her. And they tell her stuff like about Eleven's superpowers, and the lab and the government, and more about the Upside Down.”

Another compelling thread of evidence: absolutely no one from high school remembered. Steve even recalled the girl Robin is crushing on, but not Robin herself. That’s strange, especially since she seemed to know a lot about Steve, Nancy, and Jonathan, and it’s possible she’s privy to that information because she actually is a spy. That potential reveal might even work against in her in Season 4.

On the flip side, one can argue that there’s no way that Robin is a Russian spy because she was also kidnapped and threatened by the Russians alongside Steve, Dustin, and Erica. However, it’s possible that it was all a ruse devised to maintain Robin’s cover so that no one would suspect her. After all, the Russians didn’t hurt Robin, but they did beat up Steve pretty badly. Still, it seems like an awful lot of trouble to go to just to keep her identity under wraps.

While the evidence is definitely intriguing, it's still pretty hard to imagine that Stranger Things Season 4 will reveal anything quite so nefarious about Robin. Either way, we’re still a while away from finding out. No matter how it plays out, since the Russians now have a Demogorgon on their hands (thanks to that Season 3 mid-credits scene), we know the kids of Hawkins will have bigger fish to fry next season.