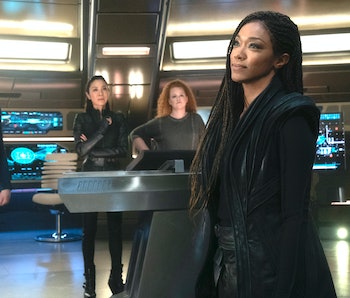 With Season 1 of Picard now in the rearview, Discovery Season 3 is the next major event on the Star Trek calendar. The upcoming episodes will see Michael Burnham and the rest of the Disco gang traveling nearly a thousand years into the future, a period that's undiscovered country for the storied sci-fi franchise. Discovery's cast and showrunners have been fairly tight-lipped about what to expect in Season 3. However, some new comments from Trek icon Jonathan Frakes and a look back at previous teaser footage hint at some enticingly upbeat possibilities for Burnham in the episodes to come.

On the heels of his memorable return to the role of Will Riker in Picard, Frakes directed the third episode of Discovery Season 3. The loveable beardo has a long history of directing Trek, all the way back to TNG, which includes several episodes of Picard and Discovery.

When asked about the upcoming season in conversation with Star Trek Magazine (via GamesRadar), Frakes said Discovery "feels like my home show now." He also offered up some details about Burnham's emotional state in Season 3's far-flung future scenario:

"Burnham has been separated from the [Discovery] crew, and then they reunite. I was talking with Sonequa [Martin-Green], and I said to her, 'This character is so appealing and interesting and complicated, and always has been, but there’s a little more joy [now].' She said to me, 'Because Burnham is now no longer driven by fear and guilt.' I thought, 'Wow.'”

On the surface, this just seems to carry forward the resolution of the Red Angel storyline in Discovery Season 2. Burnham's come to terms with her fractured adoptive family, and she's left the trauma of the Shenzhen incident and the ensuing court-martial behind her. However, Martin-Green's comments about her character take on a new meaning if you take a closer look at the Discovery Season 3 trailer that dropped all the way back at New York Comic Con last November.

"I've spent a year searching for that domino that tipped over and started all of this," Burnham says over the opening montage. It's a revealing character moment, even if it doesn't feel especially Trek. We see Burnham in a variety of outfits and hairstyles, looking contemplatively at her communicator. It almost has a bit of a rom-com feel, like Michael Burnham's Diary, where the heroine is working through her sad past to emerge from her cocoon.

Smash-cut to the next shot, we see her with Book, the new character played by David Ajala. In fact, pretty much every time we see Burnham in this trailer, Book is by her side. Curiouser and curiouser! There's also hints of an extended "getting to know you" interlude – dare I call it a hint of flirty banter? – in one of the early-season episodes, as he quizzically asks her if she believes in ghosts as they hike through otherworldly terrain to an unknown destination.

Combined with Frakes' account of his exchange with Martin-Green, there's reason to suspect Burnham's moved beyond the "fear and guilt" of her catastrophic love affair with secret Klingon Ash Tyler in Season 1. During their parting scene, Tyler accuses her of pulling back "because your parents were killed by Klingons, and you fell in love with one." Shock passes over her face, she admits, "Maybe you're right." It's clearly not a clean break for her at the time, but these things take time to get over. Now, Burnham's a thousand years away from her lousy ex, and feeling a bit more joy. Seems like the perfect time to kick off a romance with someone new.

Star Trek: Discovery Season 3 does not yet have an official release date.