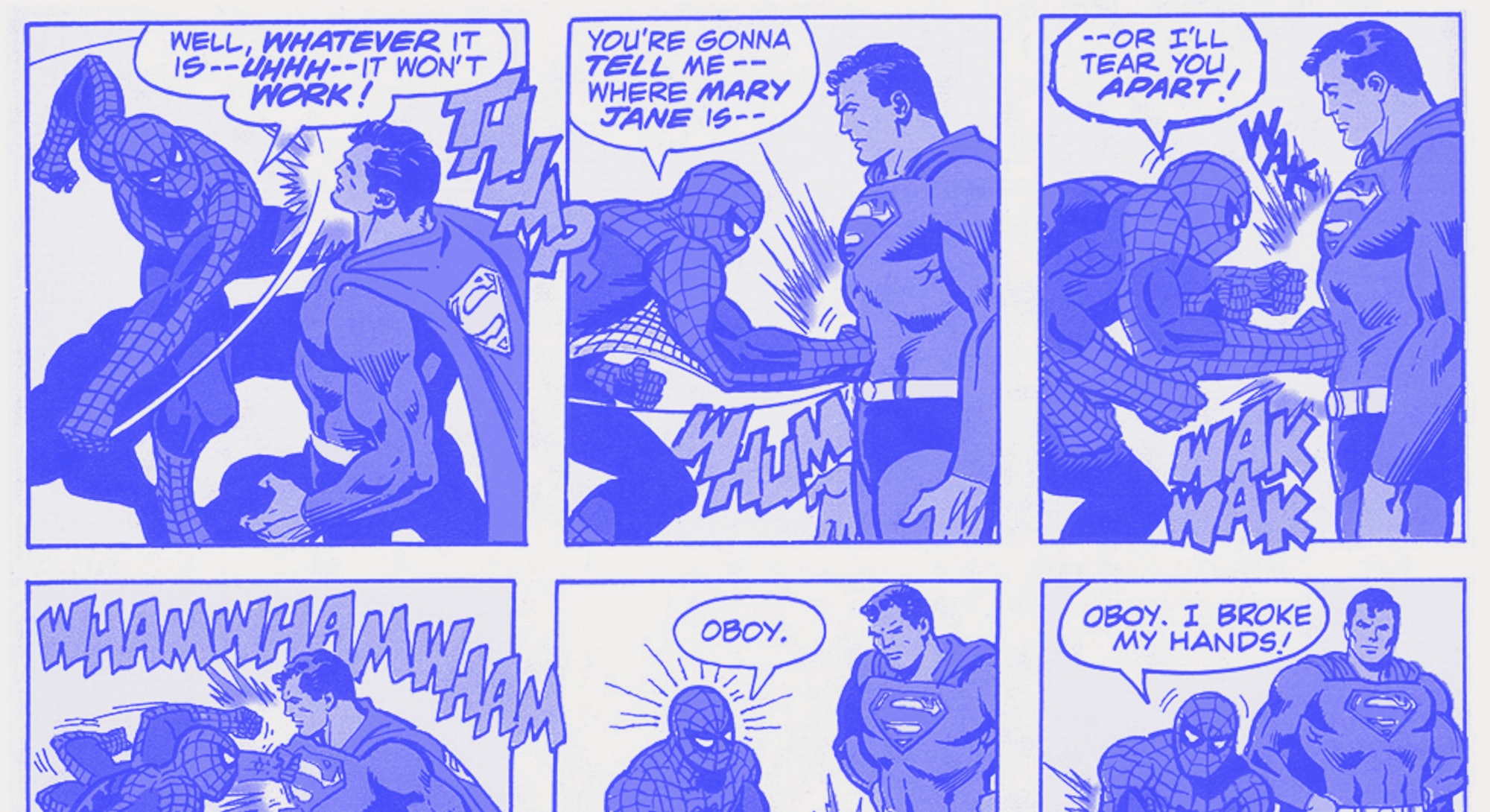 It was, according to its own cover blurbs, not only “The Greatest Superhero Team-Up of All Time,” but also “The Battle of the Century.”

Even in 1976, comic book fans knew better than to believe the hyperbole offered up on a regular basis, but this time, it seemed earned. After all, even the very idea of DC and Marvel joining forces to produce Superman vs. The Amazing Spider-Man was the stuff of fan-fiction.

At 96 pages, it was four times the length of a regular monthly comic book, but sold for eight times the price at a shocking for the times $2.00. The oversized comic wears its dreamlike status proudly with a splash page featuring the two heroes staring each other down. The words “AT LAST!” and “THIS IS IT!” underscore just how excited fans were supposed to be about the first official meeting between DC and Marvel characters. An introduction from Stan Lee began bluntly, “We were told it couldn’t be done. They said it would be impossible.”

That’s an overstatement, but Superman vs. The Amazing Spider-Man was the result of two years of painstaking negotiation and effort between Marvel and DC that started, unexpectedly, with someone entirely unconnected with either company. Instead, the man to thank for this particular comic book milestone was literary agent David Obst, better known at the time as the dealmaker behind the movie version of Bob Woodward and Carl Bernstein’s All the President’s Men.

Back in 1974, Obst had the opportunity to lunch with Stan Lee. He asked why the Marvel and DC universes had never crossed over in more than a decade of co-existing. After all, DC’s premiere super-team had visited alternate realities on an annual basis since 1963’s Justice League of America #21. Lee, being his usual affable, if non-committal, self, said that he’d love to do it, but he knew DC would never be interested… only to eat his words with Obst managed to get Lee’s counterpart at DC, publisher Carmine Infantino, to sign off on the idea. (Both Lee and Infantino receive the first credit in the finished story, which is officially “presented by” the two of them.)

As part of the agreement between the two companies, DC handled the majority of practical duties related to the book – lettering, coloring, and a rarely-mentioned “production by” credit for employee Sol Harrison – and also chose the writer. Meanwhile, Marvel would select the artist. Demonstrating the complicated spirit of cooperation fueling the project, Infantino told Marvel he knew the perfect man to script the story: Gerry Conway.

“Carmine was a guy who had this kind of tendency to carry grudges and liked to poke people in the eye.”

On the one hand, this was a sensible idea. Conway, a writer and editor at DC who was at the time working on Superman, had written The Amazing Spider-Man for years (he was actually the first regular writer on the flagship title outside of Stan Lee) and clearly had a handle on both superheroes.

On the other, Conway had, at the time, recently left Marvel on bad terms, making the suggestion more than a little awkward. This wasn’t an accident. As Conway explains in an interview from 2012’s Back Issue #61: “Carmine was a guy who had this kind of tendency to carry grudges and liked to poke people in the eye. He was really proud of the fact I had left Marvel and come over to DC, where I was writing things like Superman stories.”

Marvel was seemingly more generous in its selection of artist, putting forward Ross Andru, a fan-favorite artist with experience on both Superman and Spider-Man comics — and a history of collaborating with Conway on the latter. In reality, Andru ended up being just one artist on the project, with both Marvel art director John Romita Sr. and DC veteran Neal Adams redrawing his work to ensure both companies were satisfied with how their flagship heroes were portrayed.

With this much effort behind the scenes, fans would be forgiven for expecting that “A Duel of Titans,” as the story was officially titled, would be something really special. Unfortunately, it’s just… fine. Both Conway and Andru are professional enough to make it a fun enough read, but it’s somehow both restricted by contractual obligations – Marvel and DC expected their heroes to appear in exactly the same number of panels in the issue – and disinterested in offering up what fans truly wanted.

One glaring issue? There’s no explanation of how the heroes crossed universes to team up. Instead, the story assumes they already coexist on the same planet. Similarly, the factual fight between the two characters takes less than 10 pages before Superman sees sense and tries to calm down a passionate, misguided Spider-Man. (“This fighting won’t get us anywhere. Will you listen to me?”) What was literally described as a “battle of the century” takes up less than a quarter of the final comic, with more time spent on the two prologues introducing the heroes and villains fans were already familiar with.

Despite the disappointment of the actual story, Superman vs. The Amazing Spider-Man was a massive success and remains an important piece of comics history to this day. It might not have been the first DC/Marvel co-production – that was actually an adaptation of MGM’s The Wizard of Oz movie a year earlier, although that came about after work on this special had started — but it was nonetheless proof for a generation of fans that, in the right circumstances, and if enough people want to make it happen, anything was possible.

After all, if Marvel and DC could manage to put aside their differences long enough to work together, who knows what could be achieved?