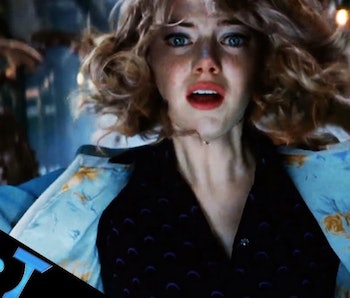 Is Gwen Stacy alive? In 2014, the Andrew Garfield-led Spidey flick, The Amazing Spider-Man 2, honored a tragic storyline from Marvel Comics. The movie adapted the moment when Gwen Stacy (Emma Stone) dies after Peter Parker attempts to save her. However, the latest Spider-Man film, No Way Home, might have changed Gwen’s fate.

If the multiverse-crossing rules of Spider-Man: No Way Home operate the way we think they do, then it’s possible that a new timeline was created where Gwen Stacy is alive. Here’s how and why the Amazing Spider-Man’s heroine could still return. Spoilers ahead for Spider-Man No Way Home.

The climax of No Way Home concerns the three Spider-Men — Peter 1 (Tom Holland), Peter 2 (Tobey Maguire), and Peter 3 (Andrew Garfield) — all attempting to convert various villains to the side of goodness. While Doctor Otto Octavius is “cured” early on, the Spider-Men have to fix the rest of the baddies at the end of the movie. When all of this is accomplished, there’s a sense that each of these reformed baddies goes back to their respective timelines. But this time, they’ve changed.

While Peter 2 and Peter 3 seem to come from a parallel point in time as Peter 1, the villains conversely traveled across dimensions and time. Put it this way: Peter 2 (Maguire) seems to be a version of that Spider-Man, whose life continued after the events of Spider-Man 3 (2007) and is simply the age he is now in roughly 2023 or so. The same goes for Peter 3 (Garfield); what we’re seeing is a version of him after the events of 2014, in an unseen timeline in which he carried on being Spider-Man following Gwen’s death in The Amazing Spider-Man 2.

But, again, the villains are all from the past. Green Goblin, Doc Ock, Sandman, The Lizard, and Electro all were plucked from their respective universes at the point in time they were about to die fighting Spider-Man. So, when they’re all sent back to their universes, they presumably return to the moment when they were fighting their respective Spideys. And this is where things get interesting.

In that film, the second blackout caused by Electro (Jamie Foxx) sets into motion a series of events that leads to Gwen’s death. Peter (Andrew Garfield) and Gwen (Emma Stone) destroy Electro in the moments before Harry Osborn (Dane DeHaan) shows up and attacks Gwen. But if Electro returns to that moment a changed man, it’s possible Peter and Gwen don’t kill him, and he would be in a position to help them fight Harry.

If Peter 3, Gwen, and Electro team up against Harry Osborn, then suddenly all the elements that led to Gwen’s death are very different.

A poignant moment in No Way Home specifically references Gwen’s death but reverses it when Peter 3 saves MJ (Zendaya). Andrew Garfield plays this scene brilliantly, and you can see that we’re supposed to read this as a moment of bittersweet triumph. He’s able to save MJ in this universe in a way he wasn’t able to save Gwen in his universe.

But, if we think about the wibbly-wobbly multiverse logistics of the movie, maybe this scene means something else. Maybe when Peter 3 returns to his universe, Gwen will be waiting for him. And if that’s the case, then No Way Home didn’t just reconcile the continuity of three previously disparate Spidey-verses; it also reversed one of the most unfair comic book deaths of all time.

Spider-Man: No Way Home is in theaters now.