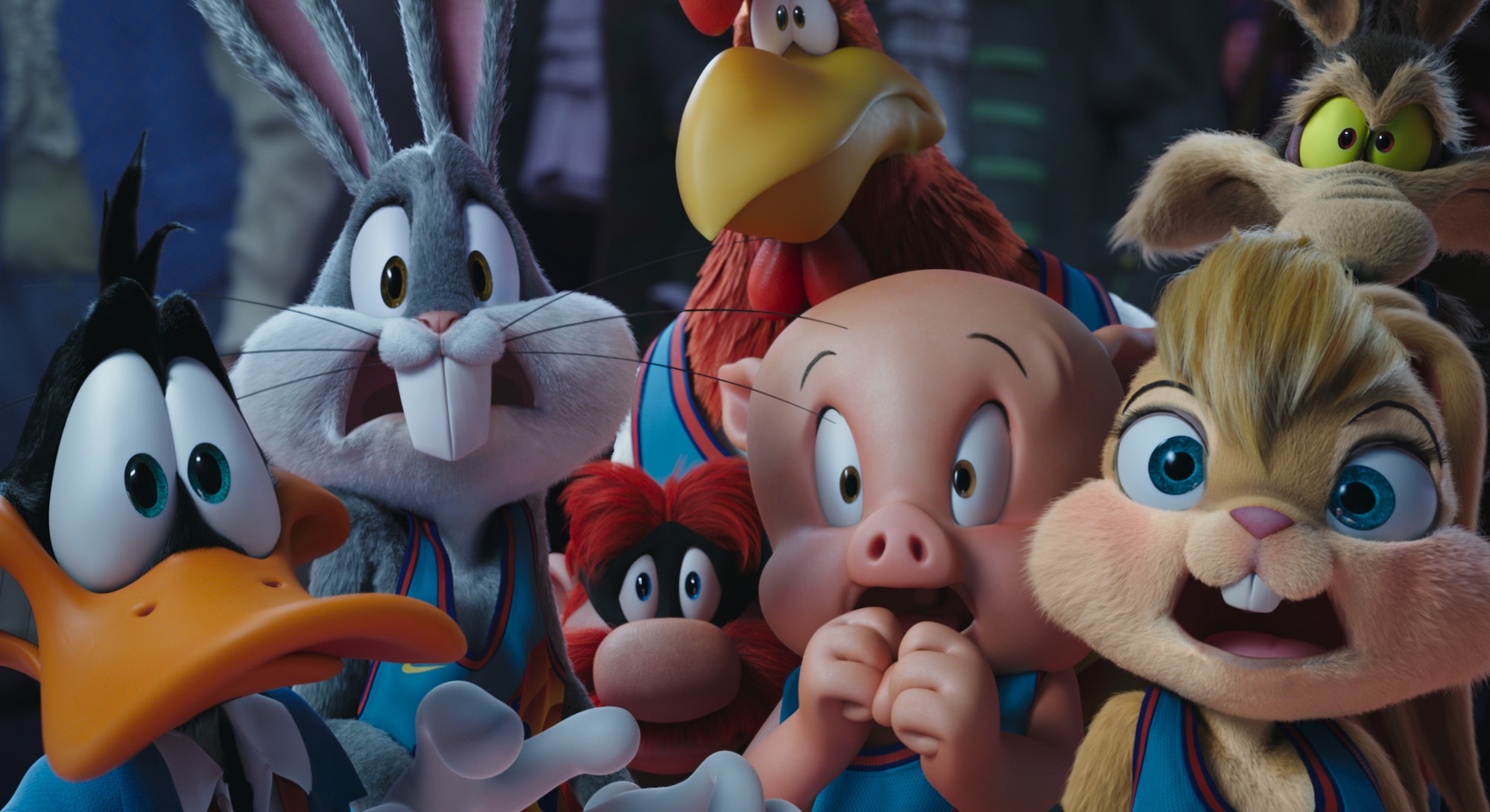 Bugs Bunny gasps in fear as fur appears up his arm, sprouting across his body against his will and transforming his two-dimensional self into something... different.

To categorize Space Jam: A New Legacy as body horror might seem like a stretch, but the unnatural transformation the Looney Tunes undergo after the movie’s villain decides to "upgrade" the 2D cartoon characters into computer-generated 3D creatures is unnerving, to say the least.

While much has already been said of the Space Jam sequel’s blatant use of nostalgia for old Warner Bros. properties via the concept of the "Serververse," the LeBron James vehicle tries to be a looney adventure with some basketball thrown in. By showing how unnatural it is for cartoon animals to take on realistic forms and textures, Space Jam 2 actually offers a much more nuanced and striking commentary on CG animated remakes of 2D cartoons.

In Space Jam 2, LeBron James and his son are trapped inside the Serververse by an algorithm named Al-G Rhythm (Don Cheadle), who kidnaps LeBron's son and forces the NBA star to play a game of basketball or lose his family forever. While the first half of the movie is animated in 2D (including the bizarre choice to create a cartoon version of Lebron), Al-G Rhythm turns the cartoons into CG-3D characters so they can play basketball in three dimensions.

The Looney Tunes freak out at their new bodies. While Bugs Bunny is covered in fur, Porky Pig has a soft spongy texture that's rather unsettling. Their motions also seem more realistic, with subtle movements replacing the chaotic, frantic movement the Tunes are known for. It takes away what makes them so special.

This is a trend we've been seeing a lot of in the past few years. Studios take traditionally animated 2D cartoons and turn them into CG-3D creatures to appear more realistic and modern. The results are mixed, at best.

In the pursuit of photorealism, however, these redesigns lose the type of expressions and movements that make 2D cartoons appealing in the first place. After all, cartoons can get away with whatever they want since the two-dimensional drawings instantly trigger our suspension of disbelief. We recognize these are not real people and they don’t need to follow real-world rules.

The moment a cartoon goes for 3D realism, it loses that suspension of disbelief, as it aims for something more grounded that then has to follow the laws of physics.

Take Sonic the Hedgehog. When the first trailer for Sonic came out, the internet blew up in outrage over the design of its protagonist, which came with new human-like proportions and teeth, despite its protagonist being a blue hedgehog that runs real fast. The Rugrats reboot is another instance of this trend. The movie exchanged Nickelodeon’s original ugly, weird, and asymmetrical designs for smoother, softer babies that lack any charm or flexibility.

In both these cases, as well as the new Space Jam, the transition from hand-drawn 2D to CG-3D is both weightless and soulless. Realistic characters no longer stretch, transform or distort like, you know, cartoons, and instead focus on realism while still never fully feeling like real characters.

Pixar movies get away with this because the entire film is computer-generated, and it doesn’t try to trick you into thinking otherwise. But when you take characters that the audience already recognizes as 2D creatures and then make them 3D, you lose that vital the suspension of disbelief.

Detective Pikachu is one recent movie that does get away with realistic redesigns of 2D characters. The live-action Pokémon movie avoided this fate by sticking to the original Pokémon silhouettes but altering enough that these creatures could live and survive in our world. This mostly meant giving certain Pokémon fur.

It works because the Pokémon look tactile enough that they fit in the world of the movie while still looking cartoonish enough that you don't think of them as real creatures, but as slightly altered versions of the animated series.

Space Jam: A New Legacy almost got away with a seamless animation/live-action hybrid, at least at first. Before the main basketball event kicks in, we are treated to what is essentially a Looney Tunes movie about disrupting popular Warner Bros. properties that feels like a big-budget Animaniacs episode.

The first half of the movie is essentially LeBron animated in 2D, recruiting the Looney Tunes for his basketball team. The only problem is that each of them has been scattered throughout the Serververse, landing in such classic Warner Bros. properties as The Matrix, Superman: The Animated Series, and Casablanca. Even if seeing Granny in Trinity's shoes in a Matrix scene is jarring and a little bit cringe-y, the combination of 2D cartoons and live-action footage is seamless because it's aiming for comedy, not realism.

In the original Space Jam, many of the funniest moments came from the Looney Tunes following cartoon physics while Michael Jordan looked bewildered. This technique also worked in films like Mary Poppins or Who Framed Roger Rabbit for decades because they draw attention to the jarring juxtaposition between real people and 2D cartoons and work it into the plot, usually for comedy.

In A New Legacy, a scene where Wile E. Coyote rides with the War Boys in Mad Max: Fury Road works, not necessarily because it looks realistic, but because the sheer chaotic energy of this character and film make for a hilariously — dare we say — looney scene.

A lot of the conversation around Space Jam: A New Legacy has been about it being a shameless nostalgia cash-grab that also serves to promote all the Warner Bros. properties available on HBO Max. Even if the film’s commentary on algorithms dictating what movies get made falls flat, the film does offer a poignant piece of commentary around the current state of animation. It shows how the pursuit of 3D animation for the sake of realism takes away from what makes cartoons special in the first place.

Al-G Rhythm may have kidnapped hundreds of people to witness a basketball game and held them hostage, but his most evil act was taking the Tunes out of Looney Tunes.

Space Jam: A New Legacy is streaming on HBO Max through August 15.