“Not everything has to be about something.” 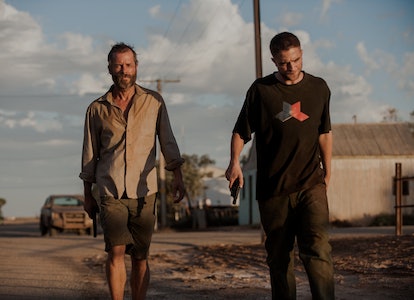 “Not everything has to be about something,” says Rey (Robert Pattinson) to his traveling companion Eric (Guy Pearce) late in their journey across rural Australia in writer-director David Michôd’s 2014 post-apocalyptic drama.

It’s tempting to see that as a statement of purpose for Michôd’s bleak, minimalist film. The Rover is set in the expansive Australian outback, in scuzzy, out-of-the-way places that were probably halfway to apocalyptic even before the film’s fictional apocalypse.

The Rover is also available to watch for free via Hoopla and Kanopy, two streaming services accessible to anyone with a library card. Here’s why it’s worth checking out.

Not everything has to be about something, and that includes Eric’s grim, single-minded quest for revenge against a trio of outlaws who stole his car. It also includes “the collapse,” the vaguely defined world-ending event referenced in the film’s opening title card and never fully (or even partially) explained. And it includes the movie itself, which presents a harsh, unforgiving environment in which any potential meaning for the characters’ lives seems to have vanished.

But The Rover is about something, even if that something is difficult to discern at first. Eric doesn’t say much, either when he stops at a dusty roadside karaoke bar as the movie opens, or when he chases the men who steal his car after their own truck careens off the road and won’t start. Pearce has a vacant, haunted look that keeps him at an emotional distance from his surroundings. Michôd wordlessly conveys Eric’s state of mind in a single shot, as the character sits passively at the bar, sipping his drink and never glancing over or even moving when the outlaw trio’s car tumbles across the road outside the window behind him.

Eric never says why this car matters so much to him, and vehicles are easy to commandeer in this largely lawless terrain. But he’s willing to go to violent extremes to get it back, drawing nearly everyone he encounters into his obsessive, destructive quest. After the thieves knock him out and leave him on the side of the road, he takes on a new tactic for tracking them, picking up the injured Rey, whose brother Henry (Scoot McNairy) is one of the thieves, and forcing Rey to guide him to the gang’s destination. The intellectually disabled Rey seems like a blind follower, first of his brother and then of Eric, but he’s more adaptable to this hostile new world than nearly anyone else.

Eric can allow himself to be consumed by his desire for revenge because he’s already a broken man, as he recounts in a heartbreaking monologue (the most he ever speaks at one time) while he’s held captive by what passes for the authorities in this forsaken region. “You should never stop thinking about a life you’ve taken,” he tells Rey. “That’s the price you pay for taking it.” The lives that Eric has taken weigh him down so heavily that adding to that burden no longer means anything to him.

As he pursues Henry and his associates, Eric stops at a dingy roadside brothel to find someone willing to sell him a gun. Outside the brothel, Eric witnesses the gun dealer throw a rock at a dog to stop it from barking, and when he’s allowed to handle his potential purchases, he casually shoots the man in the head. It’s just one more life to add to the tally.

Rey takes life, too, which is why he gets that particular bit of advice from Eric, but he does so out of instinct and loyalty, not a sense of who deserves to live or die. It would be reductive to call him simple-minded, and Pattinson, in one of the first performances that proved he could do more than play a sparkly Twilight vampire, makes Rey into a complex character who is as much of an enigma as Eric, even if he talks a lot more. As would become something of a trademark for him, Pattinson affects an inscrutable accent, somewhere between the American South and another dimension entirely, making Rey wholly unique in whatever company he keeps.

Even with all the bloodshed and car chases, the most memorable moment in the movie comes as Rey sits alone in his brother’s truck, listening to Keri Hilson’s 2010 sugary pop hit “Pretty Girl Rock” and mournfully singing along. He’s lit only by the cabin’s dim interior lamp, so it’s not entirely discernible, but it looks like there may be a tear or two dripping down his face as he sings, “Don’t hate me because I’m beautiful.” Everything that’s been lost in the collapse—that no longer exists in this dirty, beige world—is encapsulated in that brief scene.

Pearce provides a more internalized counterpoint to Pattinson’s at-times flamboyant performance, and if Eric isn’t exactly a sympathetic protagonist, he’s still fascinating, just in the way he carries on, almost zombie-like, after everything worthwhile in his life is gone. “Nothing makes me think that,” he responds when one of the car thieves asks what makes him think they won’t just kill him. “A threat means there’s something still left to happen,” he says later to his military captor when asked if he’s threatening violence. Eric’s unrelenting nihilism is a reflection of the world he lives in, but it’s also a contrast to the sparks of emotion still left in Rey. Eric would never sing along to “Pretty Girl Rock.”

The eventual reveal of why Eric has been so determined to get his car back could come off as a sick punchline, or as confirmation of the ultimate futility of all the preceding violence. But if The Rover is about anything, it’s about the tiniest things that people hold onto in order to function in a world that’s fallen apart. That may be a silly pop song, or orders that come down from distant authority figures, or the continued exchange of worthless paper money — or it may be an unremarkable old car.

The Rover is streaming now for free Hoopla and Kanopy, and also via Showtime.