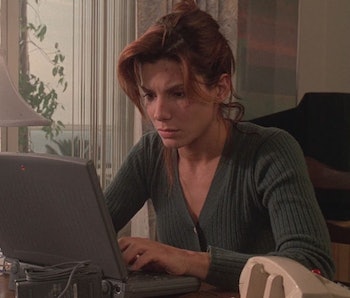 They don’t make movies like The Net anymore. A solid action-thriller starring a big celebrity that uses a trendy of-the-moment hook to sell itself, The Net didn’t rewrite cinema, but it added a welcome twist. The movie presents an updated take on Alfred Hitchcock for the '90s and the early internet era.

As Roger Ebert noted in his review at the time, Sandra Bullock had just recently broken into stardom with Speed. Building off that movie’s nonstop momentum, The Net offered a chance to be a thriller that was tied to the trend sweeping the world: the internet.

Compared to Hackers, which also came out in 1995, The Net is downright boring. While Angelina Jolie’s movie followed a group of rebellious teenagers, The Net follows Bullock’s Angela Bennet, a buttoned-up professional in comparison.

Interestingly, Bennet’s life isn’t that different from being in quarantine. she works from home testing new software, orders her food online, and talks to her friends via the web. There are signs this is meant to be sad — she rejects an in-person date to hang out online — but Bennet lives by what would seem like a very normal life today. Perhaps unwittingly, The Net accurately predicted 2020.

But Bennet’s pretty chill life takes a turn during her much-awaited vacation to Mexico. There, she meets the charming Jack Devlin (Jeremy Northam). The Net offers up a few clever classic movie references, like Angela’s online friends chanting “one of us” in a nod to the 1932 movie Freaks, and Devlin ties a handkerchief around Angela’s waist like Cary Grant’s character of the same name in Hitchcock’s Notorious.

Devlin, alas, is not just trying to sleep with her. He’s after a floppy disc that she has in her possession, and after he steals it from her, shoots his hired thief, and sleeps with her, he tries to kill her too. Angela escapes but finds her life becomes something ethereal, disappearing like smoke.

The Net gets close to what would become a major issue online: identity theft. Angela finds that her life has suddenly been erased, forcing her to sign false documents just to re-enter the United States. Once back home, the few things she holds close, like her home, are taken from her. The cops are after her. Her only friend, Dennis Miller playing a sleazy psychiatrist and former lover, dies. Bennet is suddenly being framed for murder, and she has to take down whoever’s doing it, with a computer as her only friend.

All of this taking place as computer systems across the country are failing. Could the two be connected? Spoiler alert: yes they are.

The Net relies heavily on Bullock, who gives a performance that recalls another Cary Grant role in another Hitchcock movie, North by Northwest. Both play smart people who suddenly find their lives upended by a massive conspiracy and struggle to get back on track.

Of course, The Net is not North by Northwest. Outside of a few sequences, like it’s surprise opening and Bennet and Devlin on the beach, it lacks any real visual or stylized language. Nobody really knew how exactly to frame communication online in 1995, and if someone did, it wasn’t director Irwin Winkler. While he was able to capture the thrill of physical fights years earlier in Rocky, his internet is mostly close-ups and sudden cuts when a hack happens.

But not understanding exactly how the internet worked in 1995 is no cardinal sin. Winkler’s movie understands the basics — that it can bring people together, that people keep vast amounts of information on it, that it can be easily manipulated despite what experts think. Bullock carries The Net, Dennis Miller is surprisingly good, and the tension feels real. It’s a pretty good movie, and they don’t really make those anymore.

The Net is streaming on Hulu in the U.S. through December 31.