“There's really no way to win the ring toss.” 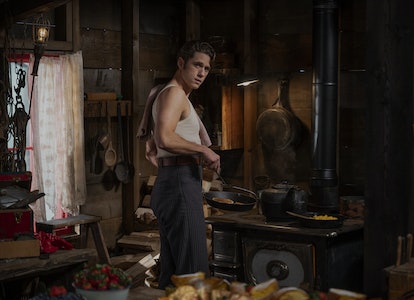 Stranded in Schmigadoon, where everybody acts like they’re in an MGM musical, normal couple Josh (Keegan-Michael Key) and Melissa (Cecily Strong) soon grow disenchanted with all the Broadway brouhaha. Their relationship was on the rocks even before they stumbled into town, and they soon learn that through some magic in its atmosphere they can’t escape until they’ve found true love.

Realizing that the “rules” of strange little Schmigadoon suggest their current romance is less than fated, Josh and Melissa fight and break up. But even before going their separate ways, their relationship is complicated by another contender for Melissa’s heart. Their first night in town, Melissa asks Josh to visit the town’s Tunnel of Love, but he instead falls asleep.

SCENE STEALERS is a countdown that salutes the unforgettable small-screen characters of the year. Danny Bailey is #12.

Sporting a pageboy cap, vertiginously high-waisted pants, and a brown turtleneck, Danny is the resident bad boy of Schmigadoon — though, beneath his brooding charisma and power stance, he’s about as threatening as bad boys tend to be in musical theater, which is to say, not very.

Upon realizing Melissa’s been ditched for her date with Josh — “You got a feller?” — Danny suddenly goes on the defensive, reacting as if she’s trying to seduce him, though Melissa insists with surprise that she’s not. “Well, you can forget it!” Danny declares anyway. “Because no woman is going to tie Danny Bailey down, no how!”

Throwing his scowl stage right, Danny launches into “You Can’t Tame Me,” Schmigadoon!’s first solo number, in which he proclaims his commitment to being single. (As he sings his heart’s song, we soon realize this rogue’s main “outsider” quality is a reluctance to settle down — and even that soon gives way to more sincere longing.)

“When a squirrel wants another squirrel,” he sings in a campily earnest vibrato, “He don't bother to get attached. And a robin don't think about the future/When he's got an itch to be scratched.” From there, Danny’s performance — supported by the upbeat string swirls of an unseen orchestra — only gets bigger, broader, and more absurd.

Who is Danny Bailey?

As this self-serious rogue taps and twirls around the sarcastic but amused Melissa, Danny’s number emerges as a magnificently one-sided restaging of the bench scene from Carousel. He even imagines a white-picket-fence future with Melissa (“Two girls for you and two boys for me”) before reaffirming that this can never be and belting out the song’s final note, arms crossing and scowl returning immediately.

In Apple TV+’s six-episode summer series, references to stage musicals from the 1940s and 1950s abound. Schmigadoon! itself, both title and premise, plays on Brigadoon, Lerner and Loewe’s musical about a Scottish village that appears for one day every 100 years. And the show’s first musical moment, a song-and-dance number featuring a chorus of smiling townspeople, is a loving send-up of Rodgers and Hammerstein’s title song from Oklahoma!

Created by Cinco Paul and Ken Daurio, Schmigadoon! was billed as a tongue-in-cheek love letter to stage musicals. It filmed its first season after Broadway shut down during the pandemic, leaving scores of performers available to work. To that end, there was no more iconic choice to take on the role of Danny Bailey than Aaron Tveit, a Broadway heartthrob at the time awaiting his Tony coronation for originating the lead role in the stage adaptation of Moulin Rouge! on Broadway. (I mean coronation literally; he was the only actor nominated in the category.)

Tveit’s track record of theatrical excellence, on and off stage, speaks for itself. From breakout Broadway roles in Next to Normal and Catch Me If You Can to memorable stints on Gossip Girl and in Tom Hooper’s Oscar-winning Les Misérables, he’s demonstrated a marvelous ability to make even the most demanding roles seem practically effortless.

“Even the most demanding roles seem practically effortless”

Schmigadoon! makes ample use of his star-wattage charm while letting him go Broadway-big on television, a rare treat for fans of both mediums (and one that makes you believe Tveit could unironically nail a Carousel revival on stage or screen). Elevated by Tveit’s immeasurable presence, Danny is Schmigadoon!’s most delightfully melodramatic player — no small feat in a series populated by no other kind.

In Episode 2’s climactic number, “Enjoy the Ride” (an energetic riff on Guys and Dolls’ “If I Were a Bell”), Danny sweeps Melissa up for a carnival dance routine, then seducing her into a one-night stand. And when the next episode picks up the morning after, he commits to yet another uproariously intense pastiche — this one a reprise of “You Can’t Tame Me” that models itself on Billy Bigelow’s “Soliloquy” from Carousel, to the degree it carries on even after Melissa absconds.

All of Danny’s scene-stealing moments in Schmigadoon! are top-heavy with references to stage-and-screen musical standards. It’s a testament to Tveit’s talent and conviction that he sells them in such side-splittingly spectacular fashion.