"I just couldn't wait to get married in order to have a ton of domestic sex.” 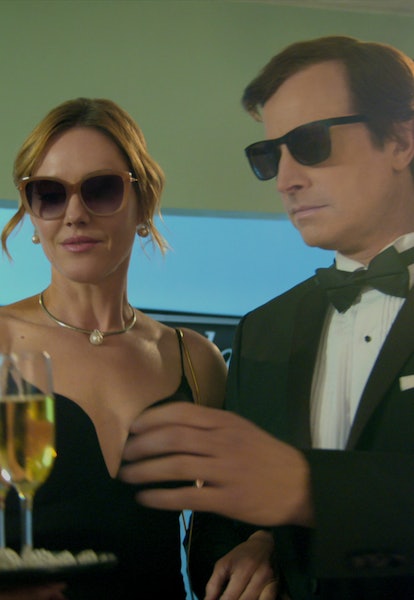 All my friends were like, “You are so sincere and excited about unlimited soup, salad, and breadsticks.”

Rob Huebel says his “really shitty” Olive Garden commercial helped him land his role as aspiring actor Leo in Derek Cianfrance’s I Know This Much Is True. He tried to play it for laughs, but the directors used his one serious take instead.

The HBO miniseries with Mark Ruffalo is a somber departure from Huebel's ongoing roles in Big Mouth and Medical Police, which sees two dumbass cop-doctors fighting a deadly virus. But the Netflix show’s uncanny similarity to some aspects of the ongoing public health crisis is purely coincidental. “There are so many similarities that it's almost eerie when you watch it, but it's sort of like the happy, hilarious version of what we're living through,” he explained.

I have two brothers, and we were kind of nightmares for our mom. Having three boys and being a single mom is really, really hard. So we were always breaking things, smashing things. We kept our tree up until like February, so it was dry as a bone, and we lit it on fire in our front yard. I was a bit of a terror. I was also really uncomfortable with myself, just pretty awkward.

What piece of clothing did you wear way too often in high school?

I was really not cool in high school, at all. I’d do this thing with my sleeves, like I would wear short-sleeve button-downs. I don't know why, but I’d fold my sleeves over and roll them up a lot. I definitely remember popping my collar — this is the '80s, but it sounds like an asshole frat guy.

Like most people that are in comedy, I was probably somewhat tortured in high school. I think you would find that consistently. Well, I don't know that I was tortured, but definitely did not feel super confident or comfortable with myself. That leads you to find ways of getting people to like you. What happens to comedians is you start joking around a lot to cover up how uncomfortable you are. Then you figure out that this is a way to trick people into liking you. So you just keep doing that your whole life. If you keep it up long enough, you might be able to make money.

Huebel in a clip from Children's Hospital.

Well, I'm way older than everyone reading this article right now, but one of my first internet adventures was a thing called Web TV, which used your TV was your computer screen. So you bought like a little adapter and like a keyboard. It was really stupid and kind of like internet for grandmas and grandpas. At the time I thought this was gonna be huge, so I bought one of these systems.

To this day, Paul Scheer and friends of mine, whenever they email me, as a ‘fuck you,’ they'll also put in my old Web TV address.

My mom was really trying to drill it into us that you had to wait until you were married to have sex. I'm not sure if I believed that at 15, but right up until around that age, I was still thinking that people most people did not have sex until they were married.

What high school teacher did you like the most, and why?

I had a high school civics teacher, Ms. Aspinall. I'm not trying to brag, but it was an AP class. She was just a really great teacher. Looking back, I'm sure she was a super progressive lesbian, but I didn't know what that was, so I just thought she was a really cool hippie-ish lady. She had a great perspective on what government is actually supposed to do, and could explain it in a way that wasn't boring. The way she explained it just felt important, even as a teenager. That's really rare.

What would you consider your first professional big break, and why?

My first big break was a commercial I did when I was living in New York. And people reading this might remember — it ran before movies for a long time, for about five years. It was called “inconsiderate cellphone man.” It was directed by Bennett Miller, who has now gone to direct like all these huge movies like Foxcatcher.

It was me being an obnoxious guy on my cell phone. It was shot against a green screen and I was just improvising stuff. So I'd be like an asshole on the golf course, or when someone's giving birth, you know? It helped me get on the map a little bit, like I would walk down the street and get recognized as Inconsiderate Cellphone Man. It was the first time I really got recognized for anything.

What would you say was your first professional failure?

Oh man, there's so many. I mean, I still fail all the time. You just have to embrace that. I was gonna say if you're doing something creative, but it doesn't even apply to just that.

One that still stings a lot was The Daily Show. I really wanted to be on The Daily Show, and I auditioned several times and never got it. I finally got a job working there, not on camera. But when they hired me they said this is only going to be for about like six months. So I was already a little bit embarrassed, because I'd auditioned a few times and then they rejected all the ideas I pitched for field pieces. “No, that's not good. No, that's not funny. No, we've already done that.”

I was such a fan of Jon Stewart, Steve Carell, and Stephen Colbert. And all those guys were still working there, and I couldn't get any of my ideas produced, so it’s always been slightly embarrassing to me. I bet those guys don't even remember that I worked there. I just felt like I totally failed there and it was just a bummer. It's driven me to make sure when I'm writing that stuff is totally solid and airtight. But in a way, it's also made me very insecure about what I write.

I hope that by 2030 — this is boring — that we've gotten serious about climate stuff. We're going to get completely fucked if we don't do something. I live in LA, and you go outside now and there just aren't as many people driving. I’ve read the air quality here lately has been the best it’s been since like the ‘30s.

I have a three-year-old daughter. So I hope by 2030 we've got leaders at the top of our system that are serious about handling that shit.

Well, about I Know This Much Is True, he’d say, “Holy shit, you get to work with the Incredible Hulk? That's so cool.” Right after Avengers: Endgame came out, Mark and I were shooting scenes in a car all day. So he was getting all these updates on his phone about the box office, and I just thought it was adorable that he was so low-key about it. I was like, “Dude, you're in the biggest movie ever made, ever!” But he was so casual and humble.

I Know This Much Is True is not at all funny, but in-between takes and on set Ruffalo's just trying to keep everybody's spirits up and joking around. He's just a really cool guy, such a fan.