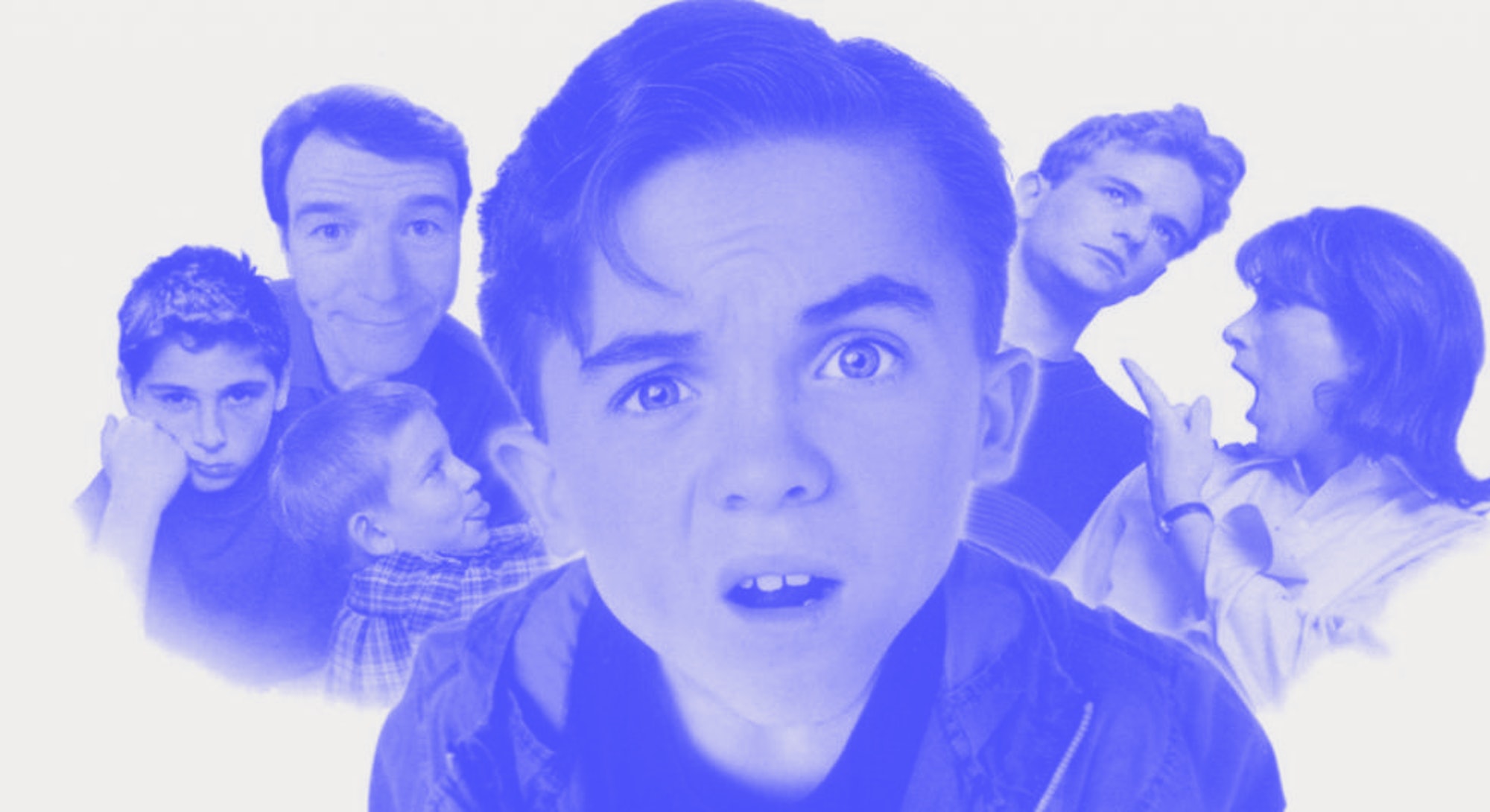 For all its virtues, it’s easy to see why Malcolm in the Middle, which turned 20 in January, never quite got its due.

In the 8:30 time slot, the single-camera comedy about a poor family and their unlikeable son directly followed The Simpsons, the longest-running show of all time, which embodied a lot of the same themes. Bryan Cranston — an actor so talented the writing staff had trouble coming up with stunts and acts he couldn’t, or wouldn’t, do — went on to even greater things, playing probably the most memorable protagonist of the prestige TV era.

Despite being overshadowed, Malcolm holds up incredibly well. It examined the class issues facing the 21st century with clear eyes (“Lady, I’m about to be replaced by a machine, I can do whatever I damn well please,” remarks a call center agent in the first episode of Season 2). It was also remarkably prescient about nerd culture, centering much of its action in a classroom full of hyper-competitive, inhaler carrying dweebs (the gifted class, known in the school as the Krelboynes). As both semi-normal and the most brilliant member of the bunch, Malcolm is generally their leader. Through his experiences, we see a foreshadowing of some of the toxicity and delusions of grandeur that feel surprisingly contemporary in 2020, an era where nerd culture could hardly be called fringe.

As the writer and comedian Matt Crowley put it in a retrospective for A.V. Club, this might have something to do with Malcolm’s phenomenal authenticity, which one of the writers describes as an “uncompromising moral vision” that’s held true even as nerd culture changed dramatically over the decades.

Malcolm in the Middle debuted on Fox on January 9, 2000. Heavily autobiographical and based on creator Linwood Boomer’s life, the show focuses on Malcolm after he is tapped for his school’s special accelerated class. The ensuing seven seasons follow Malcolm’s attempt to experience a normal childhood despite the dual burden of poverty and social ostracization due to his intelligence (Malcolm, it’s clear from the beginning, is not simply smart but brilliant).

“Around here, being smart is exactly like being radioactive,” Malcolm laments in the pilot episode. As he finishes speaking, the camera cuts to one of the most iconic shots of the show: an aerial of Malcolm’s blast radius.

The fact that Malcolm has aged so well is surprising given the shift in nerd culture and how it’s been perceived in the intervening two decades. In movies like Booksmart and 21 Jump Street, the smart kids are the cool kids, and it’s the conformists and the jocks who are struggling to fit in. The tech site The Next Web put it best in 2016, declaring that geek is chic, tech gadgets get Fashion Week runway shows now, and computer programmers date supermodels.

Michael Glouberman, the only Malcolm writer who worked on all seven seasons besides creator Linwood Boomer, agrees.

“20 years ago, there was no such thing as nerd culture. This was before Big Bang Theory or ComiCon or anything like that,” Glouberman tells Inverse. “We wanted to increase Malcolm’s feelings of alienation and frustration … we never wanted anything to work out well for him.”

Would Malcolm be popular today?

“It certainly seems like he wouldn’t have the same problems today. Smart kids have become the stars of the school pecking order,” says Andy Bobrow, a staff writer who came in during Malcolm’s fourth season who went on to write for Community and Brooklyn Nine-Nine, among others. “It’s almost like outsider-ness has become the coolest thing you can do.”

Not all of the writers I was able to catch up with agreed with this thesis. Eric Kaplan, a writer on Malcolm, The Big Bang Theory, and more recently the book Does Santa Exist: A Philosophical Investigation, argued that nerds and the well-adjusted remain locked in “a Darwinian struggle in the world of ideas and personalities and social strategies.”

“So in the same way that some weird jellyfish is fighting with another worm in the ocean, and that the jellyfish might adopt a gene and get the poison of the gene in its own repertoire, there are certain things your classic nerd did which some socially adept people have gotten in their repertoire,” Kaplan explained (the Malcolm writers, I am pleased to report, remain funny). “You can be cute and also like, ‘Oh my god I love Star Wars.’ But I don’t know if that cute popular person who loves Star Wars is a nerd.”

Whether Malcolm would be popular in 2020 is hard to say, in large part because nerdiness was hardly the character’s only isolating attribute.

Many of the most memorable episodes of Malcolm are the ones where his behavior is particularly toxic. In “Emancipation,” Malcolm drives the rest of the Krelboyne class to the point of a psychotic break in an effort to one-up the class’s elitist new teacher. Malcolm complains, incessantly, about the injustice of his circumstances, usually to his best friend Stevie who has a debilitating respiratory condition and is confined to a wheelchair. His delusions of grandeur become all-consuming when he uses ill-gotten gambling gains to buy a car, and in another damning episode, he spends hours monologuing while he’s supposed to be visiting Stevie in the hospital.

“Malcolm is not an admirable character,” Kaplan said. “He’s kind of a selfish jerk.”

“Malcolm was not outstanding in terms of his goodness,” Bobrow said. “It’s a big part of what made the show work because that’s what made Lois empathetic. When Malcolm acted out, those were the moments where you were like, she actually had to be hard on him because she’s trying to teach him how to be human.”

“Malcolm is not an admirable character. He’s kind of a selfish jerk.”

A big part of how Malcolm works toward maturity is his appreciation of his mother’s perspective. While Lois could easily be read as a nagging, angry mom (often foiled by Bryan Cranston’s permissive, motorcycle trip-taking Dad), the writers argue there is a reason Jane Kaczmarek was nominated for the Outstanding Lead Actress in a Comedy Emmy seven times, once for each season. Fans of the show often point to her monologue in the series finale as a perfect distillation of the voice of moral authority she embodied throughout the show.

The monologue, which Glouberman says took him three days to write – “I’m pretty sure I cried several times when I was writing it” -- still goes viral every once in a while. In it, Lois tries to explain to Malcolm why he needs to struggle before becoming president, as opposed to getting rich first (that Malcolm will eventually become president, we learn, is widely assumed).

“Because then, you wouldn’t have made a good president. You wouldn’t have suffered enough.” Lois explains “You know what it likes to be poor and work hard, now you’re going to learn to sweep floors and bust your ass and accomplish twice as much as the people around you. And it won’t mean anything because they will still look down on you. And you will want so much for them to like you and they just won’t. And it’ll break your heart. And that will make your heart bigger and it will open your eyes and you will finally realize that there is more to life than being the smartest man in the world.”

Far from a one-dimensional nag (as she is sometimes depicted to be) Lois’s pursuit of justice throughout the show is relentless. In one of the first episodes, she’s fired from her minimum wage job at a drug store after making the youngest son Dewey return and apologize for stealing an expensive bottle of cognac. In a later season, she spends an entire episode clashing with the criminal justice system over a contested parking ticket. And while some of her tactics may seem severe, one of the hilarious facts of the show is that her terrible sons — who among other deplorable behavior, destroyed all of her favorite possessions and tricked her into thinking she had cancer — usually deserve it.

“Rick Sanchez is Malcolm if he had never had Lois as a mother.”

“That speech, Lois was sort of being God in that moment, telling Job that the reason everything goes wrong for you is so you have empathy so you can help us,” Bobrow says, drawing a counterpoint to Rick Sanchez, the sociopathic scientist from Rick and Morty. “There might be some angle here in that Rick Sanchez is Malcolm if he had never had Lois as a mother.”

“Lois is a really heroic character,” Kaplan said. “The idea that these people are poor and that the life of being poor is a series of constant humiliations was just realism, and that was good. I don’t know if it had any other approach to class other than a fierce uncompromising moral vision.”

In short, what Lois understood, and what the show’s creators understood, was that being smart is hardly a guarantee that one meaningfully appreciates the struggles of being poor and the struggles of being a minimum wage working mom. Along with music – in one episode, Malcolm painstakingly re-writes the Meow Mix jingle for a music composition class – this is perhaps the one thing that it seems truly difficult for Malcolm to learn.

Surveying the landscape of contemporary nerd-dom, it is not hard to find other examples of what happens to nerds who don’t have a Lois. The nerd capital of Silicon Valley remains a hostile place for women, as do the companies and fan cultures the nerd men now run. Intelligence can lead to money, influence, and power. It can even, as Malcolm comes to learn, get you girls. But it doesn’t make you a good person.