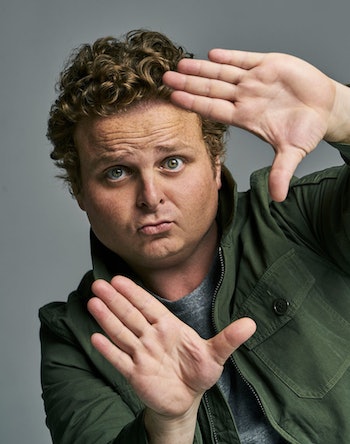 Patrick Renna has always been a ham.

The actor, who played Ham Porter in the 1993 comedy charmer The Sandlot, recently reunited with his fellow castmembers for a 45-minute special hosted by Dodgers third baseman Justin Turner. Proceeds from the special will benefit the Justin Turner Foundation, which aids homeless veterans, children, and a number of youth baseball organizations. The Sandlot Cast Reunites for Charity" can be seen exclusively on Renna's YouTube Channel, “You’re Killing Me with Patrick Renna.”

"Getting Marley Shelton [who played Wendy Peffercorn] and all Dodgers as special guests was really fun," Renna tells Inverse of organizing all the calls and cameos for the project. "My favorite part of it was probably just the whole process!"

In the coming weeks, Renna plans to launch a new baseball-focused series on his YouTube channel. He recently spoke with Inverse about getting started in the entertainment industry, his fashion missteps, and hopes for the future.

I was a ham! The director did a really good job finding the actors and working out parts of us that were our characters. Deep down, I always have sort of been that guy. I'm from the East Coast, I put my foot in my mouth. I’m definitely not the guy that sits in the back of the class and says nothing.

The sport I was most interested was baseball for sure. Probably baseball and basketball. I'm like Rudy — five foot nothing, 100 and nothing. Not really a build for football!

I was into rap and R&B. My favorite rapper was Tupac, and Boyz II Men was probably my favorite group. It's been so long, but my favorite song of theirs was the one that starts with “we don't even talk anymore.” It's like that real heartfelt ballad.

I see photos of myself in junior high wearing spandex biker shorts. I don't know what I was thinking. Anytime I see how baggy clothes were in my high school photos, it boggles my mind how that was ever a trend.

On Sandlot, Chauncey Leopardi [who played Squints] was probably the youngest and definitely the most hip. He and Brandon Adams [who played DeNunez] took me shopping once and I probably spent $500 on Cross Colours, because Kriss Kross was huge at the time, and they would wear their clothes backwards. It wasn't the best look for me.

With dial-up, everything took forever. I used to play these little games online, but it was too slow for anything good. I guess I used the internet for email once in a while.

I’m too young to be Gen X, a little too old for millennial. There's this micro-generation called Xennial, where you had an analog childhood and a digital adulthood. That is very much me — AOL, Napster, and all that stuff that came out in the late ‘90s and I was a little too old for it. So I didn't really get into the internet until my mid-to-late 20s. I'm a late bloomer on internet stuff, so I'm really just starting it all now.

I was kind of a late bloomer on that stuff too, but I just didn't believe in love at that age. Not in a sad, depressing way, but just not having experienced it yet. I'm also an only child, so I never had a close brother or sister relationship. To see siblings have that much love for each other was a bit foreign to me. I didn't understand how you could care about someone that much. I didn't start having those experiences until my late teens. So it was all unbelievable to me.

What teacher did you like the most and why?

My fondest memory of a teacher was back in Boston. Her name was Kelly, and she just taught me everything and made me start having a love for acting. I went to a smaller private school, so she would help out with the plays while also being the main teacher. There were probably only 100 people in the whole school, and learning the love of acting probably started with her.

Obviously The Sandlot, but before that I did one episode of Salute Your Shorts, the Nickelodeon show. It was such an odd experience because I wasn't one of the regulars. I went into camp for two hours and shot this one little scene, so I didn't really know what you know the acting world was about. But to have my first experience really be The Sandlot, like flying to another state, playing baseball, was pretty magical.

I did a pilot for a TV show, and I didn't really like the character that I was playing. You always hear stuff like “there are no small parts, only small actors.” Amazing actors can do wonders with even the smallest role, turn lemons into lemonade, and I didn't do that on this particular set. But it taught me to do that from that moment forward, and have more fun trying to turn a small thing into a little golden nugget. No matter what it is, it's your face there forever, so you better put everything into it.

I hope that those two sides can start listening to one another and work together a bit more. This whole experience of a pandemic becoming political is insane, and I really do think both sides are to blame. In 10 years, if we're all just listening to each other a bit more and not jumping the gun and making assumptions about one another, we will be living in a much safer, more happy environment.

It's tough raising kids in this time. You're constantly thinking, “hopefully this isn't your new life,” you know?

My 15-year-old self would incorrectly be disappointed about the digital space. When I started in this business, you sort of scoffed at anything other than ABC, NBC, CBS, and Fox. It had to be one of the big studios. But it's amazing to see and watch what the industry has turned into. And now it's actually quite the opposite. If you are doing something on Hulu, Netflix, or Disney+, that’s a badge of honor. The industry has changed so much — I'd be so shocked to see what's coming.